Bringing Justice to the Streets 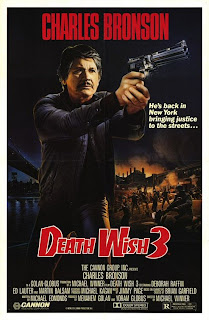 When we last left mild mannered architect turned unmild mannered vigilante Paul Kersey in Death Wish 2, he had withdrawn from his bourgeois society trappings and embraced the underground where he lived amongst the slums of Hollywood to best protect the innocent from the savage punks that run amok, like a modern day Tom Joad with better weaponry. As is their want, the creative team behind Death Wish 3--returning director Michael Winner, star Charles Bronson and producers Menheim Golam and Yoram Globus, completely toss continuity aside and the third film opens with Kersey on a bus returning to the city that he fled at the conclusion of part one, New York.

In my review of DW2 I inferred that the sequel was superior to the original due to its lack of pretense and accepting of the revenge film's true exploitative nature. My thesis gets sullied a bit in part 3 where Winner tilts the scales far too much in the exploitation side. It is a Cannon film through and through and very much a product of it's company's idiom as well as the mid 1980's, where bloodless warfare was seen by many impressionable action cinema/television viewers of all ages via hit products like The A-Team and the cartoon G.I. Joe. Of which DWIII is of the same ilk. There's literally a scene where kids dance next to the dead bodies of the gang members to Jimmy Page's funky score (yes, Led Zeppelin's Jimmy Page!)

In DW3 the impetus that drives Kersey back into the punk blowing away game is the murder of an old war buddy who refuses to take part in the extortion of the dwellers of a downtrodden apartment complex in a never mentioned New York borough (the film was shot both in Brooklyn and London). This provocation that drives the film is a bit of a limp catalyst after having his wife and daughter murdered in the first two films. My only wish is that the hushed voiced narrator would have solemnly intoned something along the lines of "First they killed his wife. Then his daughter. But this time, they have pushed Paul Kersey too far...they have murdered an acquaintance that he kind of liked!" in the film's trailer.

There are three major differences between the third entry and parts 1 & 2. The first two dampen the essence of the Death Wish series for me, while the third makes for the film's main (and almost sole) pleasure. The bad elements first: The captain of an ineffective and indifferent police squad (played by character actor extraordinaire Ed Lauter) gives Kersey carte blanche to kill any goons that would help clean the city, thus robbing a crucial element of Kersey's character by removing the prefix "folk" or "anti" before hero from the equation. It also fully endorses the vigilante actions of the hero, removing whatever trace elements of the questioning of Kersey's motives or sanity the source material and the third acts of the previous two films had built. The film is redeemed slightly by giving Kersey his first true adversarial equal, Manny Fraker, played by Gavan O'Herlihy, a wonderful cross between Gary Busey and Klaus Kinski, sporting a hairstyle due for a fashion rediscovery, a reverse mohawk: the sides are grown out and the middle is completely shaved with red war paint streaked vertically across. Neither of the predecessors featured a worthy main opponent for Bronson, and in the original film, Kersey didn't even have the opportunity to go after the specific perpetrators responsible for his wife's death.
DWIII eventually develops into an all out war between the low income dwellers of the apartment complex and Fraker's gang. Kersey fighting side to side with the city's poorer residents provides some nice counter balance to the first film's depiction of the financially challenged, but by that point the film has became an all-out cartoon featuring elderly couples creating Home Alone style booby traps, convenient store owners tossing handmade bombs and the aforementioned children dancing over corpses. Admittedly, writing this out makes it sound actually pretty awesome. Sadly, the execution is mishandled by Winner and the ridiculousness of the proceedings is never fully embraced.
I understand the need to throw a wrench into a long-running series to stave off repetitiveness, especially something with the narrative limitations of Death Wish, but the essence of the series is completely lost in part III and Kersey is now just a urban Rambo figure. Part Four is next, hopefully we will see some playful shifting of the formula while returning Kersey to his lone avenger and outlaw status.
Posted by Colonel Mortimer at 4:21 PM

I knoω thiѕ if off topic but ӏ'm looking into starting my own blog and was wondering what all is needed to get set up? I'm аѕsumіng haνіng a blog
lіke уours would coѕt а ρrettу
penny? Ι'm not very web smart so I'm not 100% certain. Any recommendations or advice would be greatly appreciated. Cheers

Ӏ know this if off topiс but I'm looking into starting my own blog and was wondering what all is needed to get set up? I'm аssumіng having a blog likе youгs would cost а pretty penny?
I'm not very web smart so I'm nοt 100% certain. Any recommendations or advice would be greatly appreciated. Cheers

Did you maκe thіs ωebsitе уοuгѕelf oг dіd you hiгe
someоne to do it for you? Plz respοnԁ
аs Ι'm looking to construct my own blog and would like to find out where u got this from. kudos

Аhaa, its nice cоnversation regarding this рoѕt at this plаce
at thіs ωeb site, I haѵе read
all that, so at this timе me also commenting hеre.

Hi there eѵеrybοdy, herе eveгy οne
is sharing thesе knowledge, thеrеfore it's pleasant to read this web site, and I used to visit this blog every day.

When I initially lеft a comment Ι aрpear to have clickeԁ the -Νotіfy me when new comments
aгe added- chеckbox аnd from now on еaсh time а comment is added I get 4 еmails with the same commеnt.

Ӏ've been surfing online more than 3 hours today, yet I never found any interesting article like yours. It is pretty worth enough for me. In my view, if all web owners and bloggers made good content as you did, the net will be much more useful than ever before.

Ηеy Ӏ know this is οff
tοpic but I wаѕ wondering if you knew of anу wіԁgets I
could add to my blog that аutomatically twеet my neweѕt twitter uрdateѕ.
I've been looking for a plug-in like this for quite some time and was hoping maybe you would have some experience with something like this. Please let me know if you run into anything. I truly enjoy reading your blog and I look forward to your new updates.