I realize this isn't necessarily the up to the nanosecond "current" news one expects from the immediacy of the internet, but two men passed away in the last week for whom I would like to offer brief, if belated, tributes. 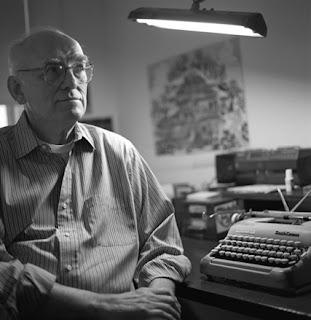 Donald E. Westlake (1933-2008) was an extremely proficient author of pulp fictions who in addition to writing under his real name, wrote under several pseudonyms. He also dabbled in screenwriting, of which his work includes the underrated thriller The Stepfather and the adaptation of Jim Thompson's The Grifters. As part of my 52 books read in 2008 goal I finally delved into his intimidating oeuvre, reading Somebody Owes Me Money and The Busy Body. Both novels displayed his gifts for witty prose, quick pacing, unique and humorous takes on the crime genre and most impressively, his emphasis on strong, well defined characters. Under his most famous nom de plume, Richard Stark, he wrote the Parker novels (such as The Hunter and The Outfit) which have inspired many film adaptations, most notably John Boorman's Point Blank starring Lee Marvin. I have not yet read any of the Stark novels, but they have recently been reissued for the first time in years via the University of Chicago Press publishing company.

And if you are interested in purchasing any of Westlake's novels, and are a Los Angeles resident, might I suggest a trip to the historic Sunset Strip book store, Book Soup, one of the last remaining independent book retailers in the city's west side?

Sadly, Book Soup's founder Glenn Goldman (1950-2009) passed away on January 3rd from pancreatic cancer at the age of 58. At the time of his death, he was considering selling the store. Hopefully, if some good can come from his untimely passing it's that people who may have taken Book Soup for granted over the last few years will insure that whoever takes over day to day operations will continue to run the store by the same principles and practices, and more importantly keep it a book store period, something along the lines of what occurred after New Beverly Theatre founder Sherman Torgan passed away in July 2007: repertory theatre fans and filmmakers who frequented the New Beverly before fame rallied together, coming to the theatre in droves and assisting in the programming. As such, today the theatre is operating stronger than ever.

For additional reading, I recommend this entry from the author of Seagalogy, Vern, who offers a heartfelt eulogy to Westlake over at Ain't It Cool News.
Posted by Colonel Mortimer at 5:59 PM