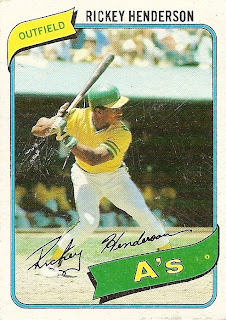 While Rickey the man may have had his faults--an ego equal to his impressive skills (upon surpassing Lou Brock to become the all-time stolen base leader, he humbly announced that he was now "the greatest of all time!"); his responsibility in the popularization of the trend that saw athletes referring to themselves in the third person, and he perhaps stuck around far too long after the effects of aging took their toll on his abilities, even playing a year or two in the minor leagues in his mid-forties. But all of these components are part of his overall persona, and damn if his charm is not only despite these traits, but because of them. And besides, I'll take his bravado over the false modesty of the likes of Alex Rodriguez any day of the week.

In 2003, a year that would prove to be his final season in the major leagues, I was lucky enough to see Rickey play in person one last time. It was during his half-season stint with the Los Angeles Dodgers. He didn't start, but late in the game, with the Dodgers holding a several run lead, Rickey came in to pinch hit for the starting pitcher, Hideo Nomo, if memory serves. He swung at an early pitch, hit an easy one hop grounder to the shortstop and was promptly thrown out. But Rickey, then 44 years old, ran towards first base with the same passion and intensity he displayed in his earlier and more fortuitous years as a World Series champ with the 1989 A's team (and the '93 Blue Jays) and in his 1990 AL MVP campaign.

My excitement at Rickey's should-have-been-unanimous induction into the Hall of Fame is tempered somewhat by the fact that once Jerry Rice gets enshrined at Canton next year, no more players from the greatest era (the late 80's/early 90's) of my two favorite sports teams (the A's and 49ers, natch) are left to be celebrated (well maybe Mark McGwire, but that is seeming less likely due to the cloud of steroid abuse and anyway that fucker would probably go in as a Cardinal anyway) with no modern players from either teams worthy of mention. But weeping for the last vestiges of my youth's prosperous sports franchise success is for another time, let's celebrate the man, the legend, the Rickey Henderson! 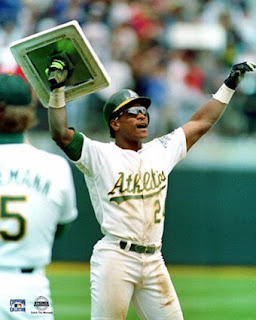 Posted by Colonel Mortimer at 11:32 PM

nice tribute, he was a great player.