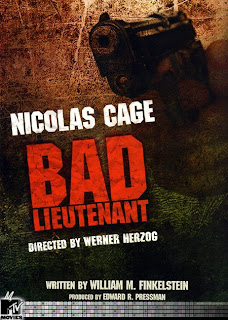 When word hit that Nicolas Cage was producing and starring in a remake of Abel Ferrara's 1992 scuzzy and NC-17 rated cult classic Bad Lieutenant, the news was greeted with the typical eyerolls and proclamations of Hollywood's further abyss into unoriginality. Then we learned that the film, to carry the subtitle: Port of New Orleans; would be directed by none other than Werner Herzog. Would this be a cynical Hollywood paycheck for the distinctive German filmmaker and all around madman, an opportunity to fund his next documentary about competing prostitution rings in the moors of Scotland (which I would totally see)? But very quickly things got interesting, Herzog said that not only would his film not be a direct remake of the 1992 film, but the first in a franchise of Bad Lieutenant films (next up: Bad Lieutenant: Downtown Wichita?) and besides he had never even seen the original or even, unbelievably, heard of Abel Ferrara!

And now we have the trailer, and it's a work of insane inspiration. If I see a crazier trailer this year...nevermind, not going to bother finishing this sentence, I will not see anything like this, Enjoy:

Bad Lieutenant: Port of New Orleans, which strangely enough fits within Herzog's overriding directorial theme of the effects of environment on the mental stability of its inhabitants, opens in December.
Posted by Colonel Mortimer at 3:25 PM

wow..just wow. i am glad you showed me this i cant wait to see this movie