Trailer of the Moment: 20 Years of Doing the Right Thing 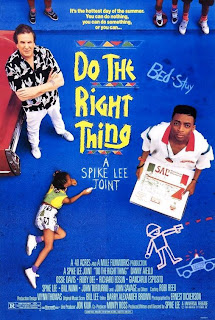 Opening on June 30th, 1989, though not expanding to full capacity until July 21st (when it hit 534 theatres a relatively paltry count for a major studio film, even twenty years ago), Spike Lee's third feature, Do the Right Thing, stood out like a racially charged sore thumb from the likes of Batman and the myriad of returning franchises such as Indiana Jones, Karate Kid, Lethal Weapon, Star Trek, James Bond, and Ghostbusters, that were filling screens in the summer of '89. While the others outdistanced Lee's film in terms of financial success, if judged by the amount of press and notoriety, Do the Right Thing was the movie of the summer.

While the costumes and references may date the film (and I am of the mind that there's nothing wrong with a film being an artifact of its era) Do the Right Thing still resonates today both politically in terms of a reference in discussion of race relations (trivia: it was the first film the Obamas ever saw together) and cinematically as a stylistic influence due to a combination of Lee's narrative bag of tricks (most famously the racial epithet exchange) and cinematographer Ernest Dickerson's great work at visually evoking tension and the feel of "the hottest day of the year", something Southern Californians without air conditioning probably can relate to this week.

Equally complex, fascinating and frustrating, Do the Right Thing is undoubtedly a work of passion on the part of writer-director-producer and lead actor Spike Lee, but the film succeeds due to the dedication and talents of the entire crew from the aforementioned Dickerson, to the strong supporting cast that included veterans Ruby Dee, Ossie Davis and Danny Aiello, and a slew of up and comers (including Rosie Perez, John Turturro, Rosie Perez, Bill Nunn, Giancarlo Esposito, Martin Lawrence and Samuel L. Jackson) and to the musical involvement of Bill Lee who provides the film it's jazz based score that attempts to soothes the nerves and make sense of the proceedings and Public Enemy's contribution "Fight the Power" that acts as a counterpoint and theme for a revolutionary march, as appropriate a pairing of a song and film in movie history.

The best evidence in Lee's collaborative spirit is the fact that he allowed Danny Aiello to bring nuance and appeal to the character of Sal, the pizzeria owner, instead of reducing the character to a mere moustache twirling racist, making the final, when his prejudices fully come to light (as much to himself than anyone else) leading to violence, death and the loss of his business, a little harder to take and deeper than a simple proclamation of a take back the neighborhood call to arms it could have been in lesser hands.

Seeing the film theatrically at the age of 13 had a profound effect on me, as a suburban white teenager growing up in Silicon Valley, it forced me to examine some of the preconceived notions I may have had while at the same time opening up a world of cinema that was multilayered and not as easily digestible as the good versus evil battle going on in Gotham City.

Here's the theatrical trailer of Do the Right Thing, considering they had to sell the film to people who may have only know it from the pre-release controversies, Universal did a pretty good job of matching the tone of this film by displaying not only the underlining tension on the precipice of explosion but also the humor, and when it wants to be, Thing is a very funny movie. They should be applauded for not only financing Lee's personal vision, but releasing this thought provoking work at the time of year when people go to movies in hopes of avoiding the use of their brains.