Even a Man Who is Pure of Heart... 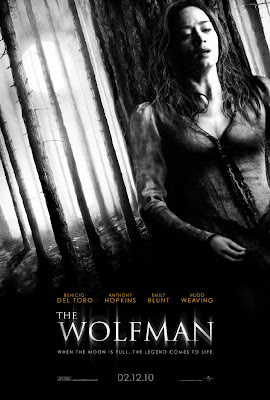 Perhaps one day a book will be written on the making of The Wolfman (2010, Joe Johnston). An expose into the elements of making a big budget blockbuster circa the end of this millennium’s first decade. It would tell the tale of the original director, Mark Romanek, walking away from production as the shooting was scheduled to begin over budgetary disputes, a patchwork screenplay and strangest of all, a Danny Elfman score that was scrapped in favor of another composer, only to be inserted back into the film a few weeks before release. There would be a chapter dedicated to bad early buzz on the internet, several different edits and release date schedule shifting. This imaginary tome would be a fascinating page turner on par with Julie Salamon’s The Devil Candy, the insider look at the making of Brian DePalma’ financial disappointment, Bonfire of the Vanities. One thing is for certain, that book would be more interesting than the actual film, or at least the theatrical version as it stands (I imagine a future DVD release will feature all kinds of different edits).

With the exception of a larger scope and more expansive cast, the 2010 version of The Wolfman is rather faithful to the original 1941 George Waggner directed, Curt Siodmak penned classic, The Wolf Man. Lyle Talbot, Benicio del Toro in the role that Lon Chaney Jr. originated, is a well respected man who on a trip back home is bitten by a werewolf near a Gypsy embankment and is cursed to a life of a lycanthrope whenever the moon is full. The new version plays up the estranged father angle, and now Sir John Talbot (Anthony Hopkins) bares a dark secret that I will not spoil, but is pretty obvious to figure out quickly (and to the film’s credit, they don’t reveal it as a big twist). The relationship between the Talbots raises one question, if Universal was so distraught over Ang Lee’s version of Hulk that they felt the need to reboot it a mere five years later, why’d they recycle the same father-son dynamic, practically beat for beat, from that film?

Johnston, the director-for-hire that came in to fill Romanek‘s shoes, shows no skill in the suspense/thriller genre. He’s too enamored with the cheap jump scare and the film loses all effectiveness especially when his frequent employment of the ADD editing style (Editing legend Walter Murch was involved? Really?) that is all the rage these days is considered. A typical “suspense” scene starts drawn out only to be quickly diminished when followed by several false alarm scares until finally, the terror strikes, with the actual real threat being shot and edited to the point of incomprehension. One assumes Romanek would’ve brought a more suitable creepy tension to The Wolfman similar to his work on his only film to date, One Hour Photo.

Rick Baker, whose most renowned work was in the werewolf genre, the 1981 John Landis directed An American Werewolf in London (which goes without saying is the superior film) does good work in collusion with the CGI effects; the transformation makes the viewer feel the bone crushing and flesh reshaping, and the film is surprisingly gory for all the editing turmoil, but the main issue again is that Johnston undermines the makeup and effects with his poor shot compositions and the rapid cutting.

Del Toro who struck me as a great casting choice, and is reportedly very enamored with the 1941 original, proves a disappointment, pretty much sleepwalking through the role. The romance between Talbot and Gwen, his deceased brother’s fiancée (Emily Blunt), just kind of happens because it’s supposed to. Hopkins is decent enough, though he’s in his “playing the villain role” autopilot. Only Hugo Weaving as Francis Abberline, the Scotland Yard detective on the case, really brings his character to life.

The finished film feels a product of a pastiche of different screenplays, though only Andrew Kevin Walker, the original screenwriter, and David Self are credited. Allusions to Shakespeare abound (Talbot is a stage actor) but are never fully expanded, Talbot’s turmoil over being a werewolf is not sufficiently explored and there’s no real characterization past what’s on the surface.

As distressing as the remake craze has become, I actually have no issue with the remaking of horror legends such as the Universal Monsters. Every generation deserves a crack at bringing the classic character back to life to see if they can add any new modern cultural thematic relevance. But much like the more recent remaking of latter day horror icons like Leatherface, Jason Vorhees and Michael Myers, the problem lies in the execution. The Wolfman at one stage had the potential to break the uninspired remake rut, but due to either not trusting instincts or too many cooks in the kitchen, it ends up a classic example of modern blockbuster filmmaking: competent enough time killer but ultimately hollow, uninteresting and forgettable. 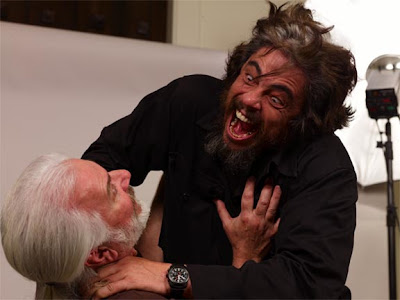 Posted by Colonel Mortimer at 9:08 PM

Good review. I saw it the other day and pretty much had the same thoughts/feelings you just listed here.

I think you got spammed above.... anyway, I was just glad to see Del Toro in a lead role again for a big release movie like this. Totally agree that Hugo Weaving did well. The poster is interesting to me as it only shows Emily Blunt... how do you rate the poster? Just curious.