Congratulations to Jerry Rice on his well deserved entry into the Pro Football Hall of Fame. 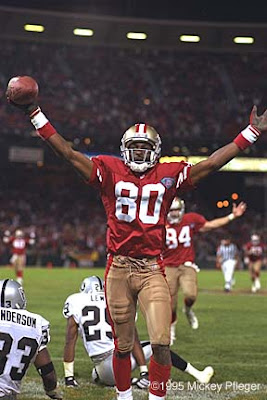 Rice, one of ex-Niner Head Coach and West Coast offensive mastermind Bill Walsh's greatest discoveries (cementing his status as a legendary finder of talent, both player and coaching wise), the 49ers traded up to pluck him with the 16th pick in the 1985 NFL Draft, a surprise move on the part of the then defending Super Bowl Champions, especially considering that Rice played for the relatively obscure school Mississippi Valley State University, but Walsh knowing that the Dallas Cowboys had their eye on him, made the trade and a historically successful career followed.

But, not at first. Many people forget that in his rookie season Rice had a case of the dropsies and a tendency to fumble at inopportune times. But his work ethic was unparalleled, and in his sophomore season he was leading the league in receiving yardage.

Rice would spend 16 seasons with the 49ers where he was the ultimate compliment to their two Hall of Fame quarterbacks, Joe Montana and Steve Young. He would amass three Super Bowl victories, one Super Bowl MVP award, 12 Pro Bowl selections and twice be named NFL Offensive Player of the Year. Rice's perseverance lead him to stay relevant longer than most skill position players.

After the 2000 season, he was cut by San Francisco and eventually picked up by the team across the bay, the Oakland Raiders. In his three and a half seasons with the Raiders, Rice would garner another Pro Bowl selection, another Super Bowl appearance (his only loss in the game) and a good rapport with Oakland's quarterback Rich Gannon. He would spend a half season with the Seattle Seahawks and a training camp with the Denver Broncos, who were coached by his former Offensive Coordinator, Mike Shananan. After being told that he would be cut before the start of the 2005 Jerry Rice retired.

Is he the best NFL player ever? Possibly.

Is he the best receiver to ever play the game? No doubt.

Additional congratulations to the New Orleans Saints (and the city of New Orleans and Gulf Coast for that matter) on their victory in Super Bowl XLIV. I'm interested to see if or how Spike Lee works this into his planned sequel to When the Levees Broke. 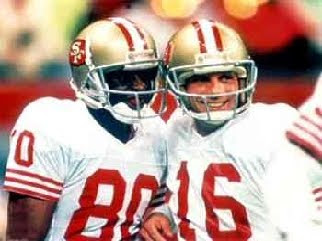 Posted by Colonel Mortimer at 4:50 PM

I didn't think he would be a first ballot choice. Oh wait its not Mike Sherrard, cool! Joe, Steve, and now Jerry in the HoF! Congrats