Now that the month of October has come to its end (insert crowd loudly sighing in unison) its back to the average 5-8 posts a month here. Again, I want to express gratitude to those who stopped by and/or left comments during the month and it was a blast reading how other blogs celebrated genre cinema during the lead up to Halloween. I have already come up with a theme for next year’s October Horror-a-thon (if life and health permits, which after the last year I am not taking for granted).

Now my movie watching focus lasers in on having my 1980 Project completed and a top ten for 1980 published by December 31st, 2010. So any 1980 Projects reviews will be shorter, about a paragraph or two and bunched together, possibly thematically, possibly not, such as today which is comprised of two horror films I watched All Hallows week, one from America, one from Italy. 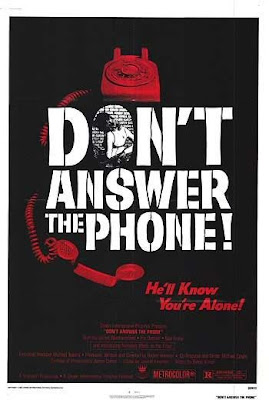 Memories of the VHS box cover from my days carefully studying the Horror section at my local video store as a teenager (RIP Photo Drive-Up and your 5 movies for 5 days for 5 bucks deal) and an airing on IFC, which I assumed to equal some barometer of quality, prompted a viewing of this sleazy 80’s slasher modeled after the Hillside Strangler murders in Los Angeles. The result is a West Coast variant on the infamous William Lustig 1980 exploitation classic Maniac (my review) but severely lacking either the skill of Lustig’s direction, the amazing gore make-up and effects of Tom Savini or the uncomfortably intimate tour de force performance of Joe Spinell. The hulking Nicholas Worth is Kirk Smith the dialer of whose phone calls you should not be answering*; his performance lacks the tortuous depths of Spinell’s but does have a certain unbridled gonzo charm of its own. Indicative of the script co-written by director Robert Hammer and producer Michael D. Castle**, his killer is given pretty much every aspect that can be found in any rote psychoanalyst research. He’s a Vietnam vet! He’s a schizophrenic (whose alias is a naughty Latino named Ramon)! He was abused! He’s a chauvinist! He’s obsessed with the sonorous voice of a radio call in psychiatrist!

The first thirty minutes is spent primarily with Kirk as he seeks out and murders his victims, all women share the singular common trait of persons that the producers were able to convince to go topless. These scenes lack suspense, atmosphere or any mature sense of filmmaking. Worse than that, for a film looking to make its mark on the exploitation market, it’s criminally light on gore instead emphasizing on the basest sleaziness of women being choked to death. The rest of the film turns into a police procedural concerning the two wiseacre detectives on the case. Like the killer’s modus operandi, the “police work” is a cornucopia of clichés, no well-worn trope from 70’s cop shows goes unattended. The dialogue has a stilted generic tone that at times seemed purposeful as if there was a tinge of a John Waters or Russ Meyer satirical edge, but I think that’s giving the filmmakers more credit than is deserving. Don’t Answer the Phone is interesting as a chronicle of the period discussed in Stephen Thrower’s encloypedea of exploitation cinema, Nightmare USA (which I just received in the mail and does indeed include a discussion of the film), but as an actual film, it’s best remembered as a VHS box.

*With the exception of the first victim, calling before killing is not really a practice by Kirk Smith so while the title of the film is catchy, it really is not pertinent, unless it’s referring to the radio host who he occasionally taunts on air, but if she doesn’t ever answer the phone, her radio call-in show would be useless.

**The film begins with the following credit: A Castle/Hammer Production, which made me at first wonder, whoa, is this a forgotten collaboration between the British horror studios and famed b-movie pioneer William Castle? Well, no. Hammer, is the director Robert Hammer. And Castle is the producer and co-writer Michael D. Castle. William Castle actually died in 1977, but I wouldn’t it put it past him to have a film released three years after his death. 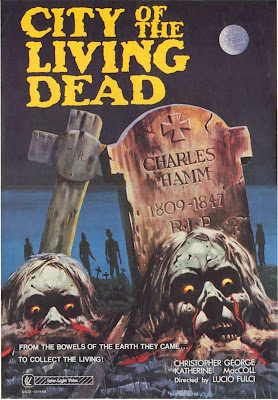 I have admitted this before, but the first Fulci film I watched, the cult favorite Zombie (aka Zombie Flesh Eaters***) left me unimpressed. Sure there was the amazing zombie versus shark scene that will go down as one of cinema’s greatest achievements in what-the-fuckery, but the rest of the film felt monotonous and kind of a slog. This was about four or five years ago, and admittedly the shark scene was so mind blowing that anything that followed couldn’t help but feel anticlimactic, so perhaps I owe the film another shot. My second Fulci was the more giallo/mystery and less gore filled The Psychic, which I thought better displayed the filmmaker’s gifts as a director. So would The City of the Living Dead push me to one camp or not? The answer is yes, I am now going to explore more of his films after being duly impressed.

A confluence of intensity, unique stylist direction, eerie music and yes, a surplus of effective gore and special effects completely masks, similarly to Suspiria, any gaps in logic or narrative questions (seriously can anyone sufficiently answer what was up with that kid at the end?). I am a firm believer that horror films excel when ambiguity and obfuscation are employed. Explaining the sources of terror (a very common trait amongst today’s genre films, prequels and remakes) remove the mysterious aura and by becoming too specific actually are less effective because the more details involved, the less pertinent it becomes to the viewer who does not relate to these specific situations. The story involves a psychic woman who foresees the gates of hell opening when a priest in an unseen town kills himself, unleashing a plague of the walking dead. But the plot mechanics are beside the point, which is Fulci’s synthesis of breakneck pacing and bravado style, which include a sequence that rivals Zombie’s shark scene when a woman regurgitates her entire internal organs including her tongue, intestine, liver, etc.

***Is there some sort of rule that each Fulci film requires multiple English language titles? The City of the Living Dead was released in America as Gates of Hell. Zombie also goes by Zombie Flesh Eaters and Zombie 2 (in Europe where it’s considered a sequel to George Romero’s Dawn of the Dead), and The Psychic also is known by the more giallo friendly titles of Seven Notes in Black or Murder to the Tune of the Seven Notes.

After writing this, but before publishing, the blogger Arbogast on Film posted a much more in depth and astute appreciation of the film, check it out here.

Posted by Colonel Mortimer at 8:22 PM

The other thing you might notice about Fulci's City of the Living Dead and its infamous gore scene is that the woman regurgitates her organs in the proper order. Yeah, I'm all about the trivia ;-).

That scene was awesome. I am glad you gave it a second chance, it was a good movie for the genre.