Life on the Stage 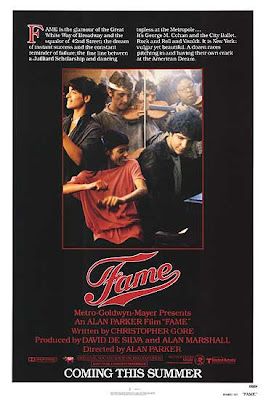 Everyday missteps and travails are multiplied to ridiculous heights when you’re a teenager. If you are a sensitive artistic minded teenager at that, these extremes reach through the stratosphere. This is captured well and practically reflected in tone in Fame which follows one class of students of the New York Performing Arts high school from auditions to graduation, a place and film where a character’s soul searching reveal of his sexuality in a classroom can be followed by a five minute impromptu dance sequence in the middle of a traffic filled Bronx street.

Employing a vignette storytelling technique Fame juggles multiple dramatically tried and true soap operatic storylines (teenage abortions, interracial romance, drug abuse, sexual predators) and a handful of archetypal characters (illiterate homeless guy, Jewish girl with overbearing mother, comedian who will reveal his tragic circumstances, ambitious career driven diva). While the film focuses on about seven or eight characters, more frequently than not a true balance is never really found. Some characters disappear for half hour chunks, while others overtake the focus. It’s not surprising this became a television show since it introduces more characters than it can handle. Most of the incidents that drive the story are never fully resolved, which I actually appreciated, since simple solutions would seem rote.

Chronologically landing pretty much midway between two blockbuster dance related films: 1977’s gritty Saturday Night Fever where dance is a temporary escape from struggles and indifference and the more fantastic Footloose (1984) where the power of dance can bring together adversarial sides, Fame looks and acts more like the Travolta film with it’s realistic on location shooting (is there any more grungy colorful place than New York City circa the 1970’s and early 80’s?) and diverse New York flavored casting but still displaying a hokey humorous sensibility and optimistic vision. Parker’s direction with its terse takes and brisk editing often clashes with the tone of writer Christopher Gore’s script early on, but at about the sophomore year section, when characters are firmly establish, they converge rhythmically. 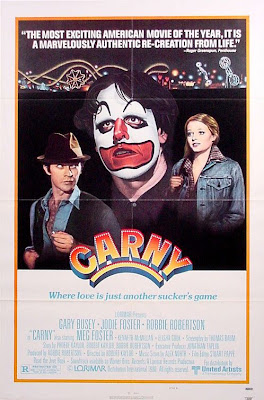 Carny, the narrative feature debut for director Kaylor, whose prior film was Derby, a documentary focused on the fringe culture of roller derby participants and fanatics, similarly examines a fringe culture: carnival workers, and the tight knit bond formed amongst them and the lengths they’ll go through to preserve said bond.

Told in an episodic slice of life manner, Kaylor’s film tells the story of two friends and co-workers, the overall ringleader and money man (The Band’s Robbie Robertson) and the clown who works the hit the target/dunk him in a pool of water attraction (Gary Busey) as they go town to town bribing local businesses and scheming together enough money to survive. Their partnership is threatened when a runaway teenage girl (Jodie Foster) joins the circuit and becomes romantically entangled with both.

The film has a nice leisurely pace (though sometimes a bit too leisurely) that we often associated with character studies of the 1970’s, and like Fame there’s no rigid screenplay structure, employing instead a more in depth chronicle of the rigors and personas of the trade. In the film’s last Act, the future of the carnival is at stake and a lifelong member of the family is killed. When a vengeance scheme is hatched, hints at darker themes that truly display the preservation instinct are hinted at, hints which were first alluded to in the film’s opening scene where Busey applies his clown make up in a dimly lit shot that’s presented as a sinister ritual, but ultimately, a more insidious streak is pulled away from at the final moment.

Kaylor could have tightened certain scenes and for a film that stars (and was produced and conceived by) a member of The Band, the music is too obvious and inappropriately toned, but he has a nice eye for composition as well as location and includes many well cast character actors in minor roles including Kenneth McMillan, Tim Thomerson and Elisha Cook. He would go on to direct only one more film, the 1990 tennis sex comedy, Nobody’s Perfect.

Busey gives the film’s most powerful performance. In his normal everyday life he’s seemingly well-adjusted and even tempered, but when the clown make-up is applied and he’s placed in a cage, his inner demons reveal themselves as he picks apart potential customers weaknesses with an intensified fury.

Posted by Colonel Mortimer at 7:03 PM