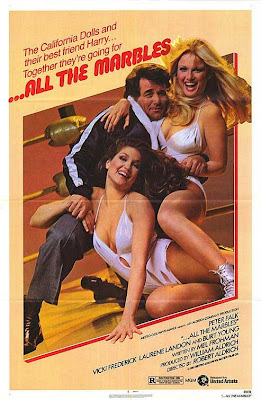 Through a career that spanned thirty years and many diverse genres, director Robert Aldrich exhibited a knack for featuring protagonist that in most other movies would be the heavy or villain, and through their pursuits and without softening their edges, made audiences empathize with their plight and cheer them on. Be they the hardened prisoners taking on their wardens in a football game in The Longest Yard, the reckless determination of hardboiled detective Mike Hammer in Kiss Me Deadly, or the twelve convicted criminals given a top secret mission in The Dirty Dozen, Aldrich frequently places himself firmly on the side of the marginalized. The two female wrestlers (Vicki Frederick and Laurene Landon) at the center of his final film, 1981’s …All the Marbles, are nowhere near as morally questionable as some of Aldrich’s other protagonist. Their scheming and cheapskate manager (who will never dine at a restaurant with cloth napkins) played by Peter Falk at his most Peter Falky, is another story entirely.

Iris and Molly, the tag team wrestling duo who perform under the moniker The California Dolls, are chugging along with little career advancement. Their manager, Harry Sears (Falk) has them traversing the country earning just enough money from their gigs to get them to the next one. Sears is a complex character, over protective of his girls but still willing to reduce their dignity to the point of performing in a carnival’s mud wrestling fight, he’s constantly inventing gimmicks to gain them attention such as dying all the hair on their body the same color. He genuinely cares for Iris and Molly (and actually has an on again off again love affair with Iris) but his own ego and short temper lead them to be ostracized from the community and bigger competition when after an argument over twenty bucks with big time promoter Eddie Cisco (a typical wonderfully sleazy Burt Young) leads Sears to take a baseball bat to Cisco’s Mercedes.

The script by first time screenwriter Mel Frohman (interesting contrast, the director’s last film, the writer’s first) has an aimless episodic air that just takes the Falk and the Dolls from bout to bout with no real driving plot other than the wrestler’s increased frustration at their marginalized status. But you know what, I like it, it’s more of a character than plot driven piece, even if it results in their entry in the final title match, their third bout with the African American duo the Toledo Tigers, just kind of happening. Speaking of which, I am glad that the Toledo Tigers are neither presented as barbaric stereotypes nor politically correct bastions of goodness, rather they are just as fierce competitors as the Dolls, meaning they’ll cheat and sucker punch if it means being crowned the champs.

Aldrich’s direction is sharp. He and cinematographer Joseph F. Biroc (whose career spanned five decades and includes It’s a Wonderful Life and Airplane!) do a great job of establishing short hand for the typical small American towns were the Dolls perform by showing the empty roads and highways, the decaying bridges and ominous factories as well as the dark smoky gymnasiums that serve as the arenas. Even the championship title fight is not in the bright lights of Las Vegas, or even Los Angeles or New York, but rather Reno, which symbolically enough is the self-proclaimed “biggest little city in the world”.

But the strength of the film, and Aldrich’s work come in the final act, the tense final bout between the California Dolls and the Toledo Tigers which Aldrich allows to play out practically in real time (it’s not as long as the match, but the editing is so invisible it feels it). The fierceness of the competitors is brought to a fever pitch and the suspense is heighten by an early reveal that their nemesis, Cisco, has paid off the official to let the Tigers win. The fight turns into pandemonium as it becomes obvious the fix is in, and as a viewer, and one whose generally lukewarm on sports film, I felt myself physically and emotionally invested in the outcome as both tag teams lie, cheat and commit any act necessary (including getting the referee involved in the physicality) to achieve their goal. It’s one hell of a sequence for Aldrich to close out his under heralded, but great career. Aldrich would die two years later in December, 1983.

Posted by Colonel Mortimer at 9:26 AM

"I am glad that the Toledo Tigers are neither presented as barbaric stereotypes nor politically correct bastions of goodness, rather they are just as fierce competitors as the Dolls, meaning they’ll cheat and sucker punch if it means being crowned the champs."

Bravo. It's one of the reasons I'm fond of this (well, that and I'm a long-time Tracy Reed admirer). RA could have let the studio play this for the trite, but damnit he didn't. I love the film for this, and the way the Toledo Tiger's manager plays it at the end. A real character-driven piece. Many equally great directors didn't end their careers as well as Aldrich did. Thanks for this.

p.s., did you watch this on cable, or did you get the WB Archive MOD?

Thanks for the comments, I was think comparatively to the manipulative and safe way Hooisers treats the two final teams. As someone whose seen a lot of sports films and knows the cliches by heart I was surprised at how emotional invested I was in the final outcome. And that's all on Aldrich.

I have the Warner Archive disc, no special features but the film looks good and is in the correct aspect ratio.