Burt in '81: The Cannonball Run 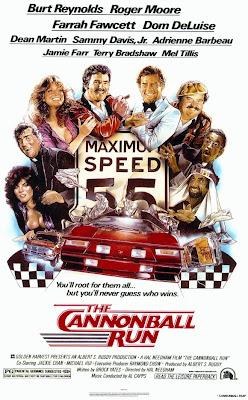 Perhaps the ultimate “they had way more fun filming this than anyone will ever have watching it” film, The Cannonball Run is Burt Reynolds’ attempt at cultivating a Rat Pack approach to one of his starring vehicles, filling the movie with cast and crew members that were either buddies (Dom DeLouise, Terry Bradshaw, Mel Tillis, and director Hal Needham), objects of affection (Adrienne Barbeau), even members of the actual Rat Pack (Dean Martin, Sammy Davis Jr.). One might applaud Reynolds who was at the time a huge box office star for being a mere cog in an ensemble piece, a modern day It’s A Mad Mad Mad World, but I’d venture to guess it was more due to laziness on his part than anything too altruistic.

A plot synopsis for a film comprised of a series of set pieces seems unnecessary, but here we go: a quirky mixture of comedic stereotypes (beer drinking hillbillies, bra busting hotties in European sports cars, tech savvy Asians) compete in an illegal coast to coast race. Hijinks may or may not ensue (spoiler: they do!). Imagine a live action version of the Hannah-Barbara cartoon Wacky Racers, and surmise expectations accordingly. Obviously cast in the mold of the two Smokey and the Bandits films, which were huge hits, Cannonball Run successfully duplicated not only elements such as the director, comic foil DeLouise and the milieu of car chases when it was released on June 19th, 1981 but also the financial success as it became the sixth highest grossing film of the year. Certainly the stacks were decked in its favor with a cast that not only includes the previously mentioned stars but also Roger Moore (playing himself as a real life James Bond), poster girl Farrah Fawcett, Jamie Farr, and Jackie Chan, who was probably included as a condition of Chinese film studio Golden Harvest, co financier of Cannonball, who were trying to break Chan in America at the time (The Big Brawl, his first film to receive wide American theatrical exhibition was released in 1980).

While it seems silly to be offended or too worked up by Cannonball Run, truthfully the film was a painful watch for me. The script by Brock Yates, who was the editor of Car and Driver Magazine and an actual participant in the race that inspired the film, crafts what is, as mentioned earlier, a series of comic moments with the barest thread. For a film that is pretty much just one long race, it contains no momentum and pretty much stops when the ninety minute mark is reached. Reynolds’, who earned a then tremendous five million dollar salary, somnambulant performance consists primarily of a smug smirk and angered reactions to DeLuise’s “hilarious riffing”. Hal Needham, who got his start as a stunt coordinator before becoming the Michael Winner or J. Lee Thompson to Burt’s Charles Bronson, shows no directorial flair other than a leering emphasis on women’s cleavage and cultural insensitivity (not saying that the film had to be “politically correct” but Jamie Farr in brown face? In 1981? And nobody seems to have any sense that Japan and China are different countries with different languages). Considering his origins, the few actual car chases are too meager in scope. It even takes the film to the final twenty minutes to get Jackie Chan into a scene that displays his martial art skills

Today the film is probably best known for the outtakes that run through the ending credit scroll that were pitch perfectly recreated in an episode of The State and inspired a favorite staple of the films of Jackie Chan. Burt Reynolds, Hal Needham, and a large chunk of the cast would reunite for a sequel in the summer of 1984.

I have not seen any of the Cannonball films and this review make me think that is an okay thing. Thanks for saving me the time, sorry you had to watch it though.

Fine look at this one, Colonel. I have to agree with you re: its watchability. I actually enjoyed the end credit outtake reel more than the film (plus they were blessedly shorter than the movie). Thanks, my friend.