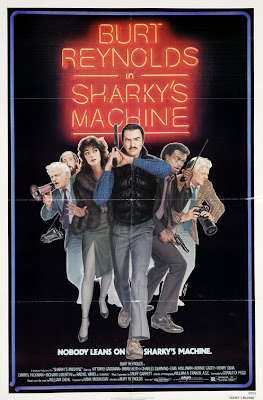 Sharky’s Machine, the third and final film to star Burt Reynolds released in 1981 serves as a contrast to his other two films in many ways. Where Cannonball Run and Paternity were comedic efforts, Sharky’s is a suspenseful action yarn. The other two films were original concepts, whereas Sharky’s Machine is an adaptation of a novel by William Diehl. The most notable difference though is that Burt himself stepped behind the camera and directed the film himself. Oh and one other thing separates it from the other two: Sharky’s Machine is actually good.

Burt is Tom Sharky, an undercover narcotics detective in Atlanta for whom his work is his life. He’s never had a family nor is he in a long term relationship. After a bust goes awry and pedestrians are put in harm’s way by Sharky’s tactics in the taut opening sequence, he is transferred to the vice squad. No longer a lone wolf, Sharky now is part of a team (the titular “machine”) and instead of undercover work and high speed chases, he’s stuck manning petty hooker charges. All of this changes when he’s assigned to track a high class prostitution ring with ties to both politicians and the mob. Surveillance duties lead to an obsessive relationship with the beautiful Dominoe (Rachel Ward) that dramatically parallels both Hitchcock’s Rear Window and Vertigo as well as Otto Preminger’s Laura, and a deadly cat and mouse game with drug addicted mob assassin Billy (Henry Silva).

Any fan of crime films or fiction (which I count myself amongst), or any genre for that matter, is aware there’s a finite number of original concepts or stories to be told, thus placing higher emphasis on unique ways of telling the story or shifting perspectives. So Sharky’s Machine might be full of familiar tropes and may not stand out as an earth shatteringly original story, however, Burt’s directorial prowess is assured and elevates any familiar material. Most impressively in a sequence where he intercuts between Dominoe’s nightly routine, and her secret protector (and admirer) Sharky observing her. Dominoe has infested herself into Sharkey’s psyche, affecting his attitude, routines and even movements. Inspired cinematography by William Fraker and impressive editing by William Gordean and Dennis Virkler, especially for its complex but unflashy nature, depict this transformation in the man, and gives the film and Sharky an interior emptiness that places an important connection with Dominoe which will be exploited by a future attack on the call girl. Further layering of this voyeur symbiosis occurs when its revealed a third party, Billy, has crashed this “relationship” and is also simultaneously watching/coveting her, but with a more sinister intent.

Reynolds, the director, keeps things moving at a brisk pace, with many great suspenseful and action packed set pieces, including an amazing plummet from Atlanta’s Hyatt Regency (not surprising that Reynolds nailed this, he was a major appreciator of the art, often performing his own stunts, playing a stuntman in Hooper and being directed multiple times by Hal Needham who made the transition from the stunt side of filmmaking to directing. This particular stunt was performed by Dar Robinson.) When Dominoe and Sharky finally do meet there’s a strong anti-chemistry between them at first which further displays the falseness of the “relationship” that the detective has mentally manufactured versus the reality of his voyeuristic obsessions. Since a teenager Dominoe has been a prostitute, aTabula rasa for the sexual desires of men, and I like that the film hints that Sharky’s reflected his own image onto her similar to her johns (if anyone has read Diehl’s book I am curious if this subtext is more announced.) Unfortunately, Reynolds the actor is not quite up to the challenge of portraying this complex nature or playing a more dark, noir style protagonist, and his restraint in that department keeps the film in the very good department but not to the level of greatness, and ultimately lessens the impact when the relationship does turn into something concrete.

The rest of the cast does good work. Rachel Ward, making her acting debut, finely alternates from fragile to assured depending on the situation. Character actor and B-movie star Henry Silva, whose dialogue is kept minimal, is a seething ball of drugged-out rage as the muscle who lets out a primordial yelp when murdering. And though some of the cop banter bandied about by “the machine” comes off a bit cliché today, it’s delivered by some great character actors like Bernie Casey, Charles Durning, Brian Keith, and Richard Libertini.

Sharky’s Machine was Burt’s third film as director, he would direct only two more features (1985’s Elmore Leonard’s adaptation Stick was the most immediate follow-up, and his last film as director was 2000’s The Last Producer which I had not heard of until writing this review) as well as some television episodes, mainly for series starring himself or wife at the time, Loni Anderson. It’s too bad because he is more engaged here as a director than as an actor in any of the three films he starred in during 1981. At the time, Burt joked that he made the film as his version of Dirty Harry since his friend Clint Eastwood was having success mining typical Reynolds’ terrain with the “Loose” series. Reynolds and Clint, whose careers actually paralleled each other closely, both starting in television westerns than transitioning to lead roles in Italian Spaghetti Westerns before ultimately becoming huge stars in American film, were two of cinema’s biggest stars of 1981. They would finally co-star together in a feature in 1984’s City Heat. Interestingly, after that point their careers went in divergent paths. Clint maintained his drawing power having several more hits in the mid and late 80’s, the 1990’s and through the first decade of the new millennium. During this period he transitioned from an occasional to full time director (and directed nine films from 2000-09, when he was in his seventies). Burt continued to coast and by the latter half of the decade the quality and success of his films (1987’s Rent-A-Cop is largely considered a career nadir) plummeted. He did have a long running successful sitcom with CBS’ Evening Shade and of course received an Academy Award nomination for his performance in Paul Thomas Anderson’s Boogie Nights (a film he apparently detested the first time he saw it). One wonders how his career would have differed if instead of coasting with his buddies he expended more effort on his legacy or was at least more selective. Perhaps today we may be talking about him as one who had successful shifted from an acting to directing career. Sharky’s Machine certainly shows he had the skills.

For two other takes on the film

Excellent examination of this film, Colonel! Good call, too, on Sharky's obsessive character parallels to those Hitchcock classics and Preminer's Laura. I really wished Burt would have taken Eastwood's route career-wise. He did show a lot of promise with this directorial stint. Tell me, did you ever catch Burt in Robert Aldrich's neo noir film, Hustle? I'd be interested in your take. Sharky's Machine has a great look and remains highly engaging even 30 years later. I very much enjoyed this post, my friend -- and thanks very much for the shout-out.

Thanks for the kind words, I have not seen Hustle but I have meant to, I really need to move that up. Head's up of future attractions: My next 1981 Project review will be for a Robert Aldrich film.

Your review was excellent and I found myself trying to live up to it. You should check out Seitz's youtube video review if you have not yet.