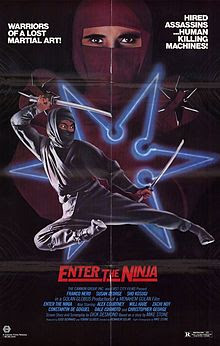 Combining two genre archetypes that would be their company’s bread and butter through the rest of the decade: the one man army and the ninja genre (sub-division: Caucasian ninja, see the American Ninja series for further studies), the Cannon Group’s Enter the Ninja, whose title familiarly cashes in on the cache of Bruce Lee’s most famous film (at least Stateside), yet proved prescient as it helped fan the flames of a fascination with Asian culture that would sweep the suburban youth of America in the 80’s, examples including but not limited to: the popular G.I. Joe comic/toys/television cartoon whose most popular character was Storm Shadow, Ernie Reyes Jr.’s sitcom Sidekicks, and the proliferation of karate and tae-kwon-do studios in virtually every strip mall in the US; and hey you are looking at no less an authority than a proud recipient of a skateboard with a giant Ninja emblazoned on its flipside at the age of ten (I never did learn how to ride that damn thing!) As for the film, it’s enjoyable b-movie material, with high camp tendencies, intentional or not.

Opening with a dialogue free ten minute sequence wherein a white clad ninja disperses several foes (a virtual Benton ad of Ninja diversity—okay, really only white, black and maroon, but that’s two more than most ninja films) concluding with the decapitation of a shinobi master that turns out to be a training initiation for Cole, the aforementioned Caucasian ninja, played by legendary Italian genre star Franco Nero whose mettle is comprised of 30% bravado and 70% moustache. Cole is so proud of his trail blazing accomplishment at being the first white guy to become an official ninja that he sports a white ninja uniform, though possibly that was a hazing ritual or a joke on the part of the other ninjas. I hate to offer unsolicited advice, but perhaps one of the reasons that the ninja is becoming an endangered species might have to do with the amount of money spent in realistic make-up and special effects for a mere initiation procedure. One whom is not happy at this new blow for ninja civil rights is Hasegawa (actual martial artist Sho Kosugi) who throws a hissy fit upon a non-Japanese man joining the ranks of the ninja elite.

Cole celebrates his new ninjadom by meeting up with old war buddy Landers (Alex Courtney), which war you may ask, well they mention Africa, Angola, so pretty much any war set in a country that starts with the letter “A” that can be replicated on the film’s Philippines locations, and his wife (Susan George) who live in a compound in Manila. While Cole perhaps imagined he would spend a relaxing vacation reminiscing with his buddy, eating adobo and partaking in some Pinay prostitutes, it isn’t long before he finds himself thrust into battle with a land baron named Charles Venarius (Christopher George) who wants the frequently drunk Landers’ home for the oil that lies under the land. And before you can say “it’s really hard to feel too sympathetic for a rich white carpetbagger who probably kicked out poor Fillipino farmers when he moved in there”, Cole is taking on a series of Venarius’ lackeys with the greatest of ease. Eventually Venarius hires a ninja to do his bidding, and lo and behold that hired assassin is none other than white ninja mortal enemy, Hasegawa. The shit is…on.

Directed and produced by Cannon co-head of operations Menahem Golan a year after the disastrous but now widely appreciated cult sci-fi musical fiasco The Apple, Enter the Ninja begs the question, is Golan either the most sincere person to ever work in Hollywood or really a sly comedic genius? The film’s ninja portions, roughly the opening ten minutes and the last half hour, are pretty straight forward and serious, but the rest of the film has its tongue firmly planted in its cheek. This schizophrenic nature is evident in its structure where it feels like the producers forgot the title of the film for about fifty minutes. Probably more likely, this film was written (the script is credited to Dick Desmond, his only produced screenplay with co-story credit to Mike Stone, also only credit…perhaps pseudonyms?) as solely the one-man army story and Golan and co-producer Globus decided to insert ninjas to give it some distinction. Back to the campier nature of the film, this is the type of action movie where our hero rips off a guys attached hooked arm out while the “wah wah” sound effect is on the soundtrack, and ends with the same hero literally winking to the audience. So I got to assume that Golan is not a naïve guy and decided to heighten the outrageousness inherent in the material. To which I say, bravo good sir, you definitely enlivened what would be an otherwise dreadfully dull section of the film. Chief MVP has to main villain Christopher George who must have contracted a diabetes related illness from the amount of sweet scenery he chews. Playing his businessman heel as a spoiled petulant billionaire to whom human life has no value, other than his own, George’s Venarius is venal, crude and careless as he laughs off the deaths of his underlings and upon learning of Cole’s ninja skills whines “He’s a ninja! I want a ninja! Get me a ninja!” Unfortunately George died in 1983, or else I would have the perfect suggestion for casting the lead in the inevitable Donald Trump biopic.

Interestingly pretty much every character in the film is kind of a jerk. Obviously Venarius and his crew, but Cole is a solipsistic white guy who probably just became a ninja because he was into Japanese chicks, Landers is so bummed that his glory days of killing in the war is over he becomes a literally and figuratively impotent self-loathing alcoholic and his wife Mary Ann is having an adulterous affair with Cole. The only exception to the general prickiness of the characters is Hasegawa, whose view on who should or shouldn’t be a ninja are archaic true, but hey the shinobi date to the 15th century, I will allow for a bit of anachronistic conviction, and at least he has a personal moral code. Besides, much like O-Ren Ishi in Kill Bill, Hasegawa eventually learns to respect his Caucasian foe. Smartly, Golan and Cannon realized that though only a supporting character here, Kosugi was the draw for many viewers, and as such he’s featured (though as different characters since SPOILER: returning as Hasegawa would be difficult what with his lack of a head at the film’s conclusion) considering that he’s the only returning cast member in the two sequels: 1983’s Revenge of the Ninja and 1984’s Ninja III: The Domination.

Posted by Colonel Mortimer at 7:08 PM

Ha! One humorous and entertaining film review, Colonel. Love that moustache reference, btw [I resemble that remark ;-)]. At least we got to experience Sho Kosugi here. True be told, he was the real highlight in 2009's NINJA ASSASSIN, too. Fun review. Thanks.