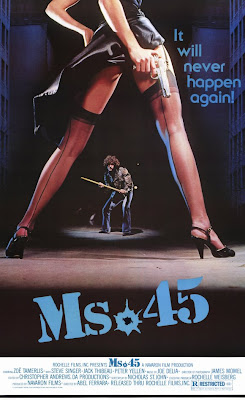 A low budget feminist variation on Death Wish, Abel Ferrera’s Ms. 45 exists in that shaded area on the Venn diagram where independent art film, sleazy early 80's New York grime, pitch black comedy and genre exploitation all intersect. The result is a wonderful concoction that to this viewer’s eyes exceeds its influence (and hey, I am a fan of the series, some moral misgivings aside, which I reviewed in its entirety here.)

The striking Zoe Lund plays Thana a mute seamstress who is frequently told by her boss, a man (natch), that she needs to work twice as hard to achieve the accomplishment of, his words not mine, “normal people”. Walking home from work one day, the virginal woman is raped in an ally by a masked vigilant (played by Ferrera). When she makes it home from that grueling endeavor she’s greeted in her one room apartment by a burglar in the midst of a robbery, who also begins to rape her. This time, however, she strikes back, killing him with her iron. She carves up the intruder and leaves his body parts throughout the NYC and with his gun in tow, the titular .45, begins walking around the city, blowing away a varied number of chauvinistic archetypes ranging from the minor annoyances to the absurd. Included in her vengeance’s wake are a hooting and hollering Brooklynite, a pimp, a Warriors’ like street gang, even a Sheik! As she kills, Thana becomes more attuned to her sexuality. Frumpy ill-fitting dresses and natural looks are replaced with au currant miniskirts, ruby red lipstick and stylish hairdos. But sexuality and empowerment lead to an increased mental instability culminating in a Carrie-esque massacre at a fashionable costume loft party, which include attendees dressed as Mr. Met and Ed Grimley.

The film is rife with symbols of sexual signifiers: the milieu of the fashion world, a woman lacking a voice, the use of an iron as her first weapon, the gun being a phallic representation/substitute; and Lund’s character conforms to a strict "ape shall not kill ape" moral code and appears physically unable to harm another female nor an animal, as displayed in one of the film’s funnier moments when she cannot bring herself to off a prime witness, her landlord’s yippy dog. But since it’s an exploitation film and rooted in the genre, it is far from didactic. Yet that never prevents it from having impactful moments such as Lund’s open mouth and ultimately futile attempt to scream for help. Lund gives a great performance, never letting the limitation of a mute character prevent her from being naturally expressive. She’s able to say so much with only facial gestures, fleeting looks and reactions, she plays both mousy and sexy with ease and is believable vulnerable, powerful and ultimately upon descending into madness.

Filled with authentic New York locations and actors, Ferrera keeps things running along at a good pace. The film is just north of 75 minutes, and masterfully balances the exploitative elements with both humanity and some wonderful dark comedy. Ms. 45 stands out from other of the Death Wish followers (and even the Death Wish films themselves) by containing a strong visual style such as the symbolic way the first shooting is framed, with Lund enveloping her victim, unique compositions of blood trickling on a newspaper, and heavy use of slow motion in the loft party breakdown. It’s a potent, enjoyable film that exceeds any expectations of its rape revenge trappings.
Posted by Colonel Mortimer at 6:00 PM

Yep, it is an unexpectedly entertaining genre film for its time. Good spotlight, Colonel.