Trailer of the Moment: I Survived Carmaggedon Weekend Edition 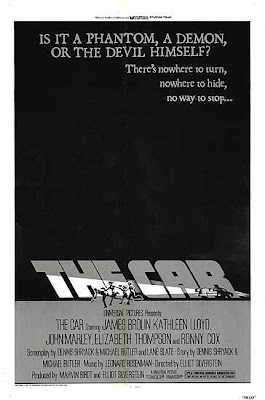 The digital sign on the 134 informed me this afternoon that the 405 is officially reopened, and Los Angeles has survived it's closure, whose inconvenience was considered so severe and heinous it was named after a Michael Bay film, relatively unscathed. But before you hop in your car to celebrate the returning integration of LA locales, let's take a look at the trailers for two films which may give you pause, because they suggest some truly dangerous vehicular possibilities.

The first feature length film directed by Steven Spielberg, scripted by the great genre author Richard Matheson (I am Legend) originally aired on television as a Movie of the Week, where it was so popular that it received a theatrical release in Europe and eventually in America. I notice a copyright date of 1972 on the trailer, so I am guessing this is from it's European release.

I know some might find this shocking, but after Jaws this is my favorite Spielberg film (emphasis on favorite over best). There's a basic primal aspect to the story and filmmaking that I really respond to, putting an everyman in a senseless terror ride. The primitiveness extends to the narration free trailer whose sixty seconds are action packed. Have fun counting the number of times the title of the film appears in this minute long trailer (I counted nine)!

The result of combining the ingredients of both Spielberg suspense films Duel and Jaws (the introduction to the lead, James Brolin, even features him being woken up a la Roy Scheider's Brody...but he has two daughters instead of two sons, so completely different) with a sprinkling of the devil based horror sub-genre that rose in the wake of The Exorcist (the film even opens with a quote from Church of Satan founder Anton LeVey), 1977's The Car is one of those enjoyable ridiculous films that were common in the 70's or 80's when studios quickly attempted to jump on a popular trend.

Similarly to the Duel trailer, The Car trailer heavily showcases the action sequences, but this time with a narrator informing us of the possessive power within, who ponders "what evil force drives...The Car!" (too bad they didn't get Percy Rodrigues) and the bellowing audio symbol of it's destructive urges...the ever threatening horn honk!

If you survived this weekend and find your appetite for vehicular mayhem whetted after these two films, I also recommend Race with the Devil (1975, Jack Starrett) where satanic cults chase after Warren Oates and Peter Fonda who are trying to enjoy a vacation in their Winnebago and Christine (1983, John Carpenter), the Stephen King adaptation where a boys first car has deadly impulses.

And in the meantime, watch the roads!
Posted by Colonel Mortimer at 2:47 PM

Glad you survived the Carmaggedon, this time!

I also think Duel is in my top 5 Spielberg favorite movies.Matheson also wrote a bunch of episodes of the Twilight Zone (I've been watching them lately). I will have to check out The Car soon, looks like some fun.

Great selection of films for this weekend, Colonel. Duel is one of great ones. The Car is surprisingly entertaining -- I actually screened this when it opened back then during my stint as a projectionist in '76-7. Fun post. Thanks.

The Car has always been one of my faves. I also love Race With The Devil and Duel. If you get a chance you need to check out Wheels of Terror, it's a pretty cheesy TV movie from 1990.

Mummbles--if you want to see a car that stalks a women to the point it drives through a house to get here, you should check this out (or Howard's End)

leopard13--yes, the Car is highly enjoyable fun flick, I also enjoy in the same vein another Universal film from 1977, Rollercoaster.

Slasherfix--I will need to look into Wheels of Terror, I am fan of vehicular slasher flicks.