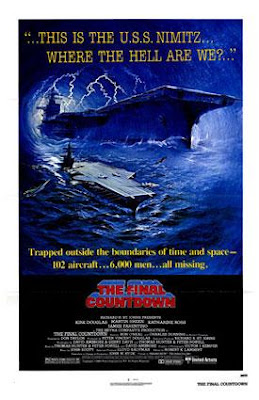 Part of The 80's Project

WARNING POTENTIAL SPOILERS FOR A 27 YEAR OLD FILM, AND ONE THAT'S NOT VERY GOOD TO BOOT

A full seven years before their sons would go mano a mano in Oliver Stone's Wall Street, Kirk Douglas and Martin Sheen butt heads as a navy captain and an efficiency expert tagging along for a routine expedition (aren't they all) out of Pearl Harbor aboard the USS Carrier Nimitz in the quasi-science fiction ponderer, The Final Countdown. Once afloat, the carrier notices weird weather patterns and finds itself in the eye of a very 1980 special effects looking vortex that causes the crew members to flail about as if they were in a Star Trek scene where the Enterprise is hit by Klingons. This disturbance is short, but once the situation appears over, the ship cannot contact base, and when they receive a radio frequency they hear a presidential address from Franklin Roosevelt (dun dun dun). Meanwhile 40's era Japanese fighter planes fly about, scoping the joint. Sign that the film is from the 1980s, when Sheen is trying to convince Douglas that some kind of amazing time travel as taken place, Douglas counters with a theory that this is some sort of elaborate scheme by the Russians. Oh those crafty, Punk'd precursory commies! Elsewhere, Katherine Ross is a political speech writer for senator and potential Roosevelt Vice-Presidential candidate Charles Durning whose boat is attacked by the Japanese and are rescued by the time traveling navy unit.

The whole Twilight Zone like concept of The Final Countdown could have made for an intriguing psychological debate. If you had the military capacity and ability to prevent the Pearl Harbor attack before occurring, would you alter the course of history? Or knowing that this was the impetus for America's involvement in the war that would, with US assistance, lead to an Allied victory and the end of the Holocaust, would you hold back? Unfortunately, director Taylor and screenwriters Thomas Hunter, Peter Powell, David Ambrose and Gerry Davis (it took four people to write this thing?) seem to have little interest in engaging in the debate. Instead what we get are very long shots of jet fighters, naval carriers and other assorted state of the art for 1980 military items and a major plot cop out.

This must have been one of the first films to be allowed to shoot using actual military equipment, and Taylor must have very proud of that, because he very lovingly spends long takes on the minute details of each machine (a big thank you note to the military predates the cast list in the closing credits). It becomes something close to military porn during the first 15 minutes where we spend more time looking at the Tomcats and aircraft carrier then we do getting to know Sheen and Douglas's characters, not that there are any nuisances to either. Okay maybe "porn" is too strong a word, but military photography wise, let's just say the respectful The Final Countdown is to Playboy as Top Gun would be to Hustler. During the leadup to the Pearl Harbor attack, in what should be the most tense moments, Taylor spends, no joke, two and a half to three minutes on shooting about five jets as pilots board them and take off. Its pretty much par for the course with Taylor's direction. The whole film is shot and paced like a made for television film with bigger stars, who are in return giving TV movie performances, Sheen in particular seems happy just to be out of the Apocalypse Now shoot in the Philippines, and I assume the rest of the cast just considered the project a nice vacation to Hawaii. Looking at his IMDB page, Taylor served in World War II, and was an actor before stepping behind the camera. He directed some Alfred Hitchcock Presents episodes and Damien: The Omen II before The Final Countdown, his entire resume post The Final Countdown: all television movies, surprise surprise.

The cop-out of which I referred occurs right as Douglas has to decide whether to let history take its natural course or get in the way, saving lives but not know what the ensuing butterfly effect (I swear, last Ashton Kutcher reference) will be...and just then...the vortex appears again, and viola, they are back in the present day, the Pearl Harbor attack takes place as does the crappy Michael Bay film. See the whole thing was because one of the commanders (played by James Farentino who played George Clooney's father on ER and was charged with stalking Tina Sinatra) would end up on an island with Katherine Ross's character and fall in love, so see he sends the ship on the mission so that he will meet his wife, kind of like how John Conner sent Michael Bein to stop The Terminator from preventing his birth by killing his mom, only you know, much stupider. Oh and a Japanese soldier from the 40's has no problem whatsoever operating a modern day semi automatic weapon, and Charles Durning's senator, aka the dumbest person to ever run for senate, and that's saying something, kills himself by shooting down a helicopter with a flare gun while they are trying to save his life.

For some reason this film has a little bit of a cult following. Perhaps its the concept itself, which would make for a killer Twilight Zone episode, if they, you know, decide to explore some of the implications instead of the lame route this takes. It was given a special feature laden DVD via Anchor Bay...and still The Magnificent Ambersons remains untouched. In an interesting bit of trivia, this was the last Hollywood film that Troma founder Lloyd Kaufman would work on, he was an associate producer, abandoning the big studios and budgets for his own underground studio. Pearl Harbor is still attacked but at least we get the Toxic Avenger out of the deal.

As a bonus treat, because its now what we all associate to the film's title, here's GOB Bluth performing magic, sorry illusions, with Europe's "The Final Countdown" as soundtrack.

Posted by Colonel Mortimer at 7:23 PM

i am sure they will remake this movie soon with cooler effects.