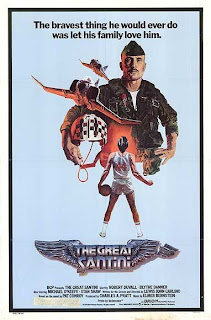 Lieutenant Bull Meechum is a walking anachronism. A soldier without a war. This stoic warrior must now return to the only thing that as ever scarred him...his family. Yeah, it sounds a lot like a bad sitcom, specifically Major Dad, but Robert Duvall's strong performance, imagine his Kilgore character from Apocalypse Now (the film he made just prior to this) waiting around South Carolina praying for a war to fill his empty time, helps The Great Santini transcends its cuckold at least temporarily. Once the focus shifts from his character to his first born son's attempt to live up to his father, the movie shifts wildly, initially becoming a "Daddy Dearest" and culminating with a tragic event involving racism that is insultingly used as the springboard to his release from dad's shadow.

The film's first act follows Bull as he is taken off active duty and moves his family to South Carolina, where he starts a new career as an instructor for his beloved Marines, and the adjustments he must make. Meechum runs his family like a drill instructor, making them all get up at 0300 hours to move houses. The first act is pretty much plot free, a character study focusing on Bull and his relationship with the "regular" world, most specifically his family. While he may have done this job before, Duvall is great as the hard nosed soldier who hates losing so much he refuses to sing "Dixie" in the car along with his family, because its a "loser's anthem". Act one culminates with the film's best scene, an initially friendly basketball game between father and first born Ben in the backyard that exemplifies their complex relationship. With the rest of the family cheering him on, Ben (Michael O'Keefe) defeats his father, who protests that he needed to win by two points and calling him a pussy and loser when he stops playing. When the son declines continuance, his father keeps berating him, following him as he walks upstairs to his room, hitting him in the back of the head with the basketball while calling him variations of the word "sissy". Duvall plays this scene three ways: 1. Middle-aged man trying to cope with aging and losing his place in the family hierarchy. 2. Quintessential American soldier who sees things in only shades of victory and defeat. 3. Father, proud of his son's accomplishment who wants to see his son not only win, but triumph.

After this, the film changes focus completely, we now no longer follow Bull Meechum, but rather Ben. While you may initially want to applaud their Psycho-ish structural about face, the fact is Ben's story is nowhere nearly as interesting as his father's and O'Keefe (who would become a good character actor later in his career) is as slight a performer here as Duvall is strong. Ben's complex relationship with his dad, his desire to rebel while simultaneously needing to please should have been able to mine some interesting dramatic conflict, and I applaud the film for never making Meechum a monster, but it cannot be avoided that film sinks after the first act and goes so far as to take the easy way out and blames Bull's action on his drinking.

The second key scene displaying the father-son dynamic involves another basketball game, this time Ben is on his high school team. In "the big game" Bull yells at him from the stand to avenge a hard foul laid upon him. Ben concedes to Bull's wishes and costs his team the game (egads!) when he sucker punches the offending player. But those of us fearful that Ben will never stand up to his dad, don't worry because a convenient avenue for growth comes from his friendship with a kindly, stuttering black fisherman, Toomer (Stan Shaw in the Magical Negro role) who is attacked and shot by a racist (David Keith who is white and not to be confused with Keith David who is black), Ben defies his dad's wishes to let the police take care of it and comes to his aid. So, Toomer dies, whatever, Ben finally lets his dad know he's his own person, and to make matters worse he...tells his father that he loves him. Not since Sandra Bullock fell on her ass and got helped by her Mexican housekeeper in Crash has a minority helped a white person come to terms with their angst. Sure he died, but wasn't the growth of our white hero more important then your life anyways?

Much like the first film of my little project, The Final Countdown, Santini director Lewis John Carlino's direction is pure TV Movie of the Week. Indifferently shot, though this was a Pan-and-Scanned DVD, with one exception very early in the film, the family's introduction. We have already meet Meechum and know he's returning home. Their introduction is a wide shot where the family is placed in the very bottom of mid frame, dwarfed within a giant military hanger, perfectly encapsulating their place in Meechum's life. Unfortunately, this would be the only moment of cinematic prowess in the entire film, which is also really poorly edited, of which the most offensive cuts come in the backyard basketball game. Instead of letting the game play out and the tension rise, he cuts, and very awkwardly so, throughout the action, so we move from start to finish with no sense of how the game has transpired. What could have been an all time great film moment turns it into a merely good scene. Just like how he takes a great Duvall performance and puts it in a mediocre coming of age melodrama.

* Everywhere I look has the release date listed as October 1979, but it was up for Academy Awards in 1981 (along with other 1980 releases) since the Academy are notorious sticklers, I am assuming the October '79 date might have been a Festival Premiere (the New York Film Festival is held in October), and am counting it in with the 1980 releases, but since its not touching any Top 10 lists, the point is mute anyhow.

* Duvall was nominated for Best Actor and O'Keefe for Best Supporting Actor, but after the first half hour, O'Keefe's has at least twice as much screen time as Duvall.

* Duvall's character constantly refers to himself in the third person as "The Great Santini", obviously a big influence on future sports figure such as Deion Sanders and Ricky Henderson, in a nod that he is cognisant of its effect, he refers to his family as "sports fan"

* The film never says the year in which it takes place, but I am assuming late 50s/ early 60s since Meechum tells Ben on his 18th birthday how he was serving in World War II at the time of his birth. This would make sense as it would fall in between the Korean and Vietnam wars. It would also explain why the high school basketball teams are made up entirely of short and skinny white guys

* SPOILER EFFECT--The film ends with Meechum's death. Instead of trying to crash land the jet he's testing into the city, he goes down into the ocean with the jet and dies...but we never see him crash. I like to assume that Meechum, sick of his whiny ass family decided to parachute out and create a new identity for himself, then when the Vietnam War occurs, he reenlists under a new name, Kilgore.
Posted by Colonel Mortimer at 1:50 PM

I just did a post on this movie a few days ago. (Not a review) You've got me thinking about it a bit more critically but I still can't come anywhere close to writing it off as a mediocre coming of age theme. I enjoyed the reading though.

PS: I thought the basketball scene was a highlight of the film also.