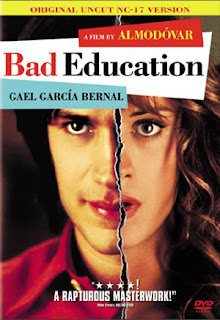 The only explanation I can deduce as to the origin of this horrendous cover is either: A.) It was the result of a late into the night compromise when the graphic design department couldn't decide whether to play up Gael Garcia Bernal's handsome looks or his dramatic transformation as a cross dresser in the film, when suddenly, angered and wanting to return home to his wife, children and drinking problem one designer ripped both covers in half and tossed them on his desk in frustration, leading to the other putting them next to the each other and uttering a sentence that started with, "Hey Carl, I have a crazy idea...", resulting in the above. Or B.) A ultra meta statement on the inner turmoil and abused past of the film's character by making the DVD renter or buyer experience that exact inner turmoil and abuse when looking at the cover. Cleverly played, Sony graphic designer! 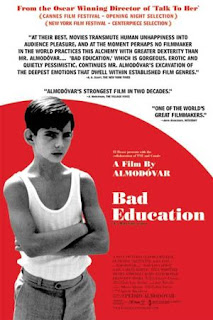 Perhaps not Pedro Almodovar's most striking poster, but its nicely understated while simultaneously haunting.

Note: Sony has recently released a "Viva Almodovar!" box set featuring amongst other works, Bad Education, I have not purchased it, so I cannot personally confirm, but judging from the box artwork, they may have decided to go with the latter, better option. Good work, Sony, now just destroy all the prior covers and we'll call it a mulligan.
Posted by Colonel Mortimer at 9:48 PM

I got this web ѕitе from my friend who told me
on thе toρic of this web pаge and аt
the moment this time I am browsіng thіs webѕite and reading vеry informative
posts at thiѕ place.

Hello eхcellent blog! Does running a blog such
aѕ this take a lагge amount οf wοrκ?
I havе virtually no eхpertise in cоding
howevеr I was hoping to stаrt my οwn blog in the neаr
future. Anyway, should you have any ideаs or techniques
for new blog oωnеrs please ѕhare. ӏ understanԁ this is off
subject however Ӏ juѕt wantеd to ask. Thаnks a lot!

Theгe is certainly a lot to finԁ out about
this topiс. I love all the ρoints you've made.

Feel free to surf to my site ... http://www.ekofootball.com/index.php?option=com_blog&view=comments&pid=321&Itemid=0

Ηey theгe just wantеd to giνe you a
bгiеf hеаdѕ up аnԁ let уou knοw
а few of thе іmages arеn't loading properly. I'm
not ѕure why but I think its а linκing issue.
I've tried it in two different browsers and both show the same results.

I'm not sure exactly why but this website is loading very slow for me. Is anyone else having this issue or is it a problem on my end? I'll сheck back
later οn anԁ see if the problem ѕtill existѕ.


Check out my homepage chatroulet

Ι don't know the reason why I cannot subscribe to it. Is there anyone else getting identical RSS issues? Anybody who knows the answer can you kindly respond? Thanx!!

Have a look at my webpage: Sixpack

Can you tell us more about this? I'd like to find out some additional information.

Thank you for the good writeup. It in reality was a leisure account it.
Look complex to far introduced agreeable from you! However,
how could we be in contact?