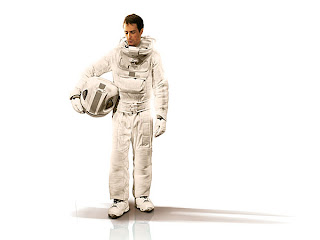 Moon (2009, Duncan Jones), recollects such 60's/70's era science fiction films as Solaris, Silent Running and The Man Who Fell to Earth (here's the part where I am obligated to mention Jones is the progeny of a musician and actor with interstellar bona fides of his own, David Bowie) that use the vastness of space to tell seemingly intimate stories which ultimately reveal expansive ideas. Unfortunately, discussing these ideas in relation to Moon too much would unveil the elegantly revealed surprises in store in Nathan Parker's script (based on a story by Jones), which is built on a natural progression of information over abrupt surprises, but to name one, nothing less than the idea of what constitutes humanity in someone/something is a major theme.

The film may be Jones' debut, but he displays a strong and assured directorial hand, with a veteran skilled organic storytelling approach. Tony Noble's carefully detailed production design and the reliance on practical effects over CGI lends it the air of a film from an era other than the post Star Wars western in space template reliant on spectacle over ideas and character that is the standard for modern day sci-fi, currently on display in JJ Abrams retooling of Star Trek (a film I like, by the way).

Sam Rockwell, who's pretty much in every minute of the film as Sam Bell, an astronaut counting down the final days of a three year mining mission stint on the moon whose entire life is thrown for a loop after waking from an accident during a routine exercise, gives a wonderful, nuanced performance in a tricky role that...well, again, I can't really go into details without spoiling too much.

Composer Clint Mansell, whose score for Requiem for a Dream has been used so much in other film's trailers to convey doomed intensity to the point of cliche, provides a pitch-perfect score that's sure to be iconic, with textures and ambiance that calls to mind one of Jones' father's greatest collaborators, Brian Eno.

With the exception of one or two nits I could pick, including a bit of unnecessary voice-over dialogue as the film fades out, this is the first new film in quite some time to really burrow into my head and effect me (probably first since There Will Be Blood), and one that I foresee only growing in estimation with each subsequent viewing. I loathe terms like "thinking man's" science fiction, since it's natural implication displays an arrogance and contempt for pop art such as the aforementioned Star Wars or Trek, but Moon juggles the tricky line of not holding your hand and trusting you to keep up with it while being free of any pretension. It's easily my favorite film of 2009 (so far, naturally).

Here's the trailer which gives you a good sense of the film while slightly hinting at the plot mechanics which I tried to avoid discussing here. I hope you enjoy it as much as I did.

*see what I did there, I combined a plot element of the film with a line of a Bowie song
Posted by Colonel Mortimer at 9:53 PM

I saw the preview a while ago and the trailer really peeked my interest, glad you enjoyed it. I will check it out