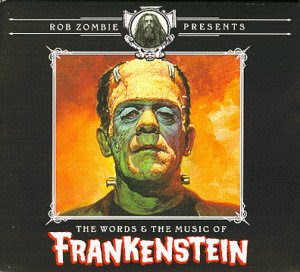 Perhaps the necessity of warning anyone from purchasing a decade old compilation CD of film music that itself is over seventy plus years of age are slim, but since yours truly was prompted to purchase Rob Zombie Presents The Words & Music of Frankenstein upon discovery in the used bins at Amoeba Records based on a love of the films and a predilection towards soundtrack collecting, I know I would have surely appreciated such a forewarning.

Compiled by musician/filmmaker Rob Zombie (who was at the time under contract both as a music act and writer/director of House of a 1000 Corpses with Universal*, who of course own the rights to Frankenstein) the disc ostensibly collects the music and bits of dialogue from the first three films in the franchise (the eponymous, Bride of and Son of), but like all of Zombie's endeavors, be they musical or cinematic, the result is mediocrity. I guess the fact that words preceded "music" in the compilation's title should have been a clue, but out of the set's 56 (!) tracks only about ten are music only tracks. The rest are snippets of dialogue, often only about 10 seconds in length.

I guess it's cool if the "It's Alive" moment came up when I had my Itunes set to random, but I own these films on DVD and am not blind, so what's the benefit? Most egregiously, several tracks feature dialogue scenes playing over cues of the score that are not included in music only tracks. The whole thing is basically a modern equivalent of those read & listen records that truncated the story of hit movies whilst you read a picture book, turning the page at the chime, that were popular in my childhood.

Ending on a positive note, the booklet that comes with the CD does contain some great production behind the scene photos. This would have made a great special feature on the DVD. Otherwise save your money and hope that eventually someone releases a true album of Franz Waxman and Frank Skinner's wonderful atmospheric scores.

*Universal eventually found it too graphic and never released the film, Lionsgate eventually did.
Posted by Colonel Mortimer at 12:15 PM

"but like all of Zombie's endeavors, be they musical or cinematic, the result is mediocrity"... nice and true