Forewarning: More time and energy is spent on describing my memories of film exhibition in San Jose circa the early to mid 1980s than on the actual film reviews. Sorry.

By time I became cognizant of theatrical exhibition practices in my hometown of San Jose, CA (this would be around 1982, when I was six years old) I don't believe the city had any grindhouses left, if they ever had any to begin with, though it had a few theatres that still showed porn and at least one that programmed martial arts films only, and unlike the 1970's sex and violence programmed counterparts, Drive-ins were pretty much extension of mainstream theatres, showing the hits of the day with an older film from the same studio as a co-feature. So, sadly I do not have nostalgic memories of catching high quality trash exploitation fare at either a grimy bum-ridden theatre or in a drive-in (I did see a lot of things at the drive-in however).

If you will allow further tangential discussion before getting to today's reviews, let me describe a bit how films tended to open in the early to mid 1980's in my hometown. There were generally two levels of release. The bigger budgeted, studio produced, films would open exclusively at the Century theatres, a collection of high quality domed theatres. At their height there were a total of eleven screens between the 6 theatres (those theatres being the Century 21, Century Town and Country, Century 22, Century 23, Century 24 and Century 25), so there was a more exclusive nature to what played there. These films also generally opened concurrently at the local drive-ins too. As for the more cheaply made usually genre fare that was also frequently produced in the era, they opened wider and played for shorter engagements in theatres that generally had six to eight screens and were located either within or next to malls (they would often play the films that just left the Century theatres too until they made their way to the Dollar theatres). Towards the latter stages of the decade, larger multiplexes with ten or more screens began popping up throughout San Jose and neighboring cities such as Mountain View and Milpitas. As a result, wherein in 1982 something like say E.T. would open only on one or two in-door theatre screens in San Jose, by 1990, something of say Dick Tracy's caliber would open in about four or five theatres, and due to the size of multiplexes which could open bigger films on multiple screens, about eight to ten screens.

Today those small mall multiplex theatres have vanished and been replaced with bigger models that now show every first run feature that is released (save foreign and edgier independent films that are still ghettoized to urban areas), and films open wider and play theatrically for less and less time, not unsimilar to the patterns of the b-movies of the earlier decades. Iron Man 2 for example probably opened on something close to 25 to 30 screens in the San Jose area this summer during its opening week, but was done with its main theatrical release after seven weeks versus the months long engagements films of equal success enjoyed twenty five years ago. Most depressingly, these bigger model mall located multiplexes have replaced the beautiful one screen palaces as the destination theatres, just look at Los Angeles, where the more popular cinemas are located within such shopping plazas as The Grove, Americana, Westside Pavilion and the Paseo. Consequently, most of the smaller budget exploitation fare being produced today has been relegated to cable or straight to DVD premieres.

As I get to my actual reviews (I know, finally) I wish the films I am discussing were better or that I had more to say about them. Regardless, what I find more interesting than the quality of the movies is the circumstances in which there were released and thrived. They represent a bygone era that may not have always resulted in great product, but to me is much more interesting than today’s theatrical experience. 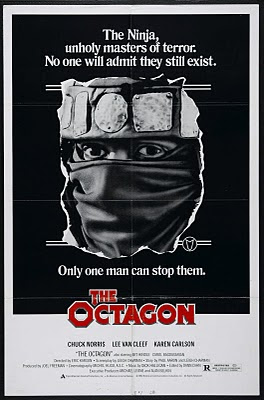 I should start this review by stating that before viewing The Octagon, I had only seen two films by 1980's Cannon action superstar and current internet meme favorite Chuck Norris, not counting numerous out of context moments from his television show Walker, Texas Ranger courtesy of Conan O'Brien. Out of those two, one was Revenge of the Dragon in which he battled Mr. Bruce Lee, and the second, which I saw earlier this year, was the enjoyable if slight Andrew Davis' directed Code of Silence. While I strive to see as much as I can and want to give Norris as much of a chance to win me over, I find him too stiff and personality less; based on the two starring roles I've seen in him, he’s also unwilling to play any characters displaying anything but the whitest shade of good (ironic for someone who acted in a film titled Good Guys Wear Black). Your Charles Bronson, Clint Eastwoods, even your Schwarzeneggers, Seagals and Van Dammes infuse some personal quirks into their films and/or play characters of some ambiguity.

In the present day retired karate man Scott James (Norris) takes a gal pal home only to discover that her entire family has been slaughtered, as she will too be shortly, by...ninjas! While this would by all accounts qualify as a pretty bad first date, Norris doesn't seem too shaken up about the death of his lady and more concerned with seeing an supposedly non existent ancient warrior such as the ninja. Through his impressive detective skills, which pretty much amount to sitting down and talking with Colonel Mortimer himself, Lee Van Cleef, the leader of a militant anti-terrorist squad and being tricked into helping some rich broad, who of course wants to jump his bones, that informs him there's a secret society of terrorists being indoctrinated by a rogue ninja. That rogue ninja was Norris' training partner, who got all pissy when Norris defeated him in their training battles. Maybe because he's Asian it was a cultural reaction to losing a karate regimen to a white guy, but that's not really inferred, he's just eeeevviilll!!

The main problem with The Octagon is that for how awesome the events of the film sound when described, it's executed so blandly that the film is a boring slog. The best exploitation works know full well what they are and make up for lack of certain resources like big name actors and large budgets by heavily emphasizing what it does have going for it (e.g. car crashes, gore, ninja vs. ninja action!) and amping things to a level that are a step further than the mainstream usually allows. Unfortunately, Karson is operating under the impression that he's making a film of James Bondian scope, with an actor of Humphrey Bogart's personality. Screenwriter Leigh Chapman gives Norris' character of bevy of bon mots and witticisms that completely thud when spoken by its wooden lead, not to mention, most hilariously, an over explanatory voice over crutch which finds Norris character really slowly and with heavy echo and reverb revealing, to himself more than anything, the proceedings. The plot is too convoluted; I wasn't sure how Van Cleef's militant group even played into the whole thing. And for a film which promises ninjas and karate fighting, its lead actor and fighting coordinator Chuck Norris doesn't actually partakes in any karate action until about the fifty minute mark. I am a fairly easy mark with this type of film, but there's one thing I can't abide by, and that's boredom, which regardless of it's "sounds awesome on paper" plot or ambition, The Octagon ultimately is. 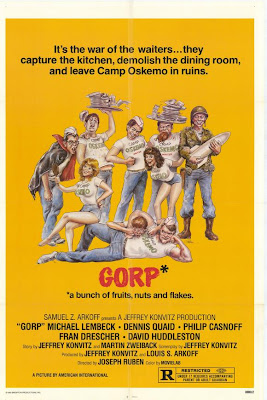 Sadly, I was 0 for 2 on this round, with this Animal House imitator being an even harder watch. The character templates are replicated almost step for step from Landis' film: two smart aleck slackers, an overweight slob, the nerd, and a military obsessed member (an early performance from Dennis Quaid) but lacking any of the wit, strength of character or performances of the quality of John Belushi, Peter Reigert, et al, though Quaid does try to enliven his stereotype with some bravado exuberance. The film itself is comprised of meaningless bits of pranks, insults and sexual humor strung together with a lack of any attention paid to what came before or follows it, it's like a best-of hits compilation by a bad cover band. It's a movie made by checklist, not by any interest in entertainment. The only thing not by the numbers is the fact that it's very specifically Jewish. Admittedly, this type of humor and film is not my cup of tea, I appreciate Animal House but it's far from a benchmark for me cinematically.

Director Joseph Ruben's directorial career began with soft-core sex romps, but he would go on to have a decent career, most notably for me he directed one of my all-time favorites (since catching and recording it on HBO in 1988), The Stepfather. Here he's yet to make the transition to clear narrative storytelling, not exactly a requirement for the soft-core genre. The cast of primarily unknowns feature future stars Quaid, Fran Drescher (pre-obnoxious laugh) and “introducing” credit recipient Rosanna Arquette. Combined with the usually intriguing American International imprint and Samuel Z. Arkoff production credit, I assumed from the talent on hand the results would be a few laughs or something engaging. I was wrong. The other folly I made is thinking that since it’s never been released on DVD (but is now on Netflix Instant Watch) that it may be an undiscovered gem. But one must remember, for all the diamonds in the rough, there’s also more rough some times.

Posted by Colonel Mortimer at 9:11 PM

But if you need to go to abercrombie and fitch, eat at the food court, and see a movie all in one day the mall is such the place! But I agree, San Jose has less interesting places left to see a movie. California theater is a very great movie place, but is not used much. I am still glad the Century 21 and 22 are still around. I remember waiting in line many times at the 21. They had a great atmosphere for opening weekend releases. I can recall two guys would camp outside the 21 for a lot of big releases back in the early to mid 90's.

You need to take part in a contest for one of the highest quality websites
on the net. I'm going to recommend this site!

Also visit my website - how to lose weight fast for women