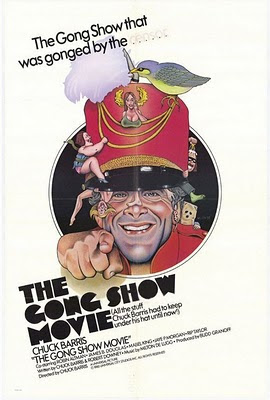 Though known primarily for his stint as the host of the "un talent" game show The Gong Show, Chuck Barris is quite the Renaissance man. He was a successful television producer who at the height of his career was a cottage industry unto himself responsible for hours of programming; he's authored several books (both fiction and non-fiction), and lives in the South of France. And that doesn't even mention his career as an in demand CIA operative! So it's no surprise that when his smash hit game show ended up getting a film version, he not only starred as himself, he also produced, directed and co-wrote the screenplay with Putney Swope director Robert Downey (the father of the Zodiac and Iron Man star). The resulting film is a slightly interesting mess and the most simultaneously self obsessed and self loathing film this side of The Brown Bunny, sadly the film does not conclude with Barris receiving fellatio from the Unknown Comic (though the infamous "popsicle twins" footage is included).

I am sure that Universal's thought was that Barris would transform the series to theatres with a bawdy possibly nudity filled version of the game show a la Allen Funt's What Do You Say to a Naked Lady that would fit in with it's other comedy hits like Animal House, but instead Barris offers his own personal 8 1/2 wherein he's suffering a crisis of identity as he's reached a point where he cannot go anywhere without being bombarded by strangers from all socio-economic backgrounds (we're talking from the homeless to doctors) showing their "talents" while being told what a disgrace to society he and his show is by network censors and those with discerning tastes. This loosely episodic plot is intercut with highlight reels of uncensored footage from rehearsals and the show, including its two most infamous moments: the aforementioned popsicle twins and judge Jaye P. Morgan flashing her breasts, that help pad the film’s ninety minute run time.

Chuck Barris constantly slouched and frequently adorned in a big hat that covers his eyes (the first scene of the movie shows him waking out of bed, and tossing a hat on whilst still in the clothes he slept in), became The Gong Show host by necessity, but was the perfect embodiment of the show's ethos. The ramshackle show where any person off the street could display their negligible talents for the world of course should be hosted by a man who though quirky and charismatic had a ramshackle presence and negligible credentials in comparison to other of the game show host ilk.

Just as his may not be the typical talk show host, neither is Barris a typical director. The Gong Show Movie is not a quote unquote good movie. It's plotless (which is a positive attribute all things considered), repetitive and meandering, but it's still not without a certain charm. Barris shows little visual flair as a director, but he's competent, and there are a few other much more highly regarded films released in 1980 that I've seen with less visual prowess, and with an occasional gift for a visual joke--Phil Hartman has an early career cameo as an armed terrorist getting on Barris' flight; a doctor who assails Barris with his piano playing, randomly appears on call when a fry cook needs a pianist for an impromptu audition. Barris' and viewer's best interest would probably have been for Downey to write and direct the whole thing himself, it may not have been a more successful movie but it probably would have been more memorable.

Transforming one media phenomena to film is a tricky thing. More often than not what seems like a juggernaut in the moment is more fleeting and ephemeral, and by the time the fame has been repurposed into a movie, the object of the instant stardom's status has been reduced to the discount bin. There are many more Cool as Ice and Spice Worlds than there are A Hard Day's Night in the world. Even perpetual ratings champ (and a show that always struck me as more insidious than the Gong Show) American Idol had a huge flop when it tried to take it's series first season stars into the realm of fictitious cinema. When The Gong Show Movie appeared in theatres on May 23rd, 1980 it was greeted with a disinterested public despite the fact the show would remain in syndication for much of the forthcoming decade. Universal has never released it on home video, and save a few cable screenings (the copy I viewed aired on the Sundance channel of all places!) it's been gonged out of the public consciousness quicker than any critical decisions from Jamie Farr himself.
Posted by Colonel Mortimer at 9:21 PM

I'm embarrassed to say, but I've never seen this film. Heard of it, but not seen. I need to correct that... soon. Thank for this, Colonel.

I am with le0pard13, have yet to see this movie. I have seen the movie about him being in the CIA, with Sam Rockwell.

Thanks , I have recently been searching for information about this subject for a while and yours is the greatest I've found out so far. However, what about the bottom line? Are you positive about the supply?
http://www.twitterfollowersreviews.webs.com