Before He Was Expendable

Sylvester Stallone’s career was at a small crossroads when 1981 rolled around. Four years after the tremendous box office success of Rocky, which netted him Academy Award nominations for his performance and screenplay, and won the Best Picture Oscar, Stallone had earned favorable notices for FIST and Paradise Alley, and began a directing career which included the successful sequel Rocky II. But he was not yet the brand he would become later in the decade, and the two films he’s featured in that were released in 1981 show a Stallone still attempting to be acknowledged for his acting skill rather than his brawn, and while he may be top billed in both films he shares equal screen time in Victory with thespian heavyweights Michael Caine and Max von Sydow (and, uh, Pele) and in Nighthawks with Rutger Hauer, making his American film debut.

Neither film were sizable hits, and Stallone wouldn’t have his first crossover success in a non-Rocky character role until 1982, when Vietnam Vet John Rambo’s plight in First Blood led to the other monosyllabic speaking character for which he’s now synonymous. The year 1982 also featured the release of Rocky III, which saw that franchise divorcing itself further from the more realistic world of the first film. Much like Rocky in the third film, Stallone would no longer be the underdog, and even though he would be featured in multiple films with disastrous reputations in the 1980’s (Rhinestone, Over the Top and the Saturday Night Fever sequel he directed, Staying Alive), this transformation to a muscular, hulking visual symbol of Ronald Reagan’s American values made him one of the most bankable stars in the world. Between 1982 and 1990, Stallone would play either Rocky or Rambo a total of six times.

However, this is the 1981 Project, so we will reserve further conversation of First Blood or Rocky III until next year, and focus on a Stallone who was still very much finding his niche after the phenomenal success of Rocky. 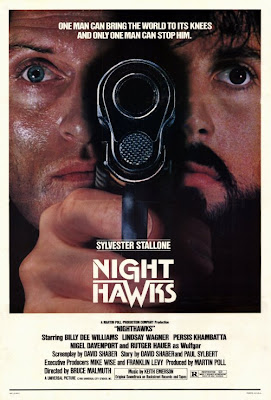 Opening with our two buddy cops (Stallone and Billy Dee Williams) in an undercover sting operation that features Stallone in drag, disguised as the ugliest prostitute in the Bronx (now that’s saying something!), Nighthawks calls to mind the Eurocrime thrillers of the prior decade, as well as one of the major progenitor of that genre, William Friedkin’s The French Connection. In fact, Nighthawks script originated as French Connection III, before Gene Hackman rejected the notion of returning for another go as Popeye Doyle. Our heroes now introduced, the film then cuts to our villain, Wolfgaur (Rutger Hauer), a terrorist of unspecified affiliations (though his character seems more motivated by fear and destruction than politics) who leaves a bomb in a crowded London shopping area.

Much like the poster which features half of both Stallone and Hauer’s faces split down the middle to form a single image separated only by a gun, Nighthawks, works best when it contrasts the hunter, Stallone, in a rare role as a pacifist with no interest in collateral damage, and the hunted, Hauer, impressive here as a force of violence and sexual dalliances. The screenplay ignores some very specific details, like for example the origin of the intel that reveals Wolfgaur is in New York, which I understand could have led some critics to see it as a mere collection of set pieces, but I actually liked this aspect, and this structure best serves the strengths of both the leads and director Malmuth.

Stallone, with a thick beard and glasses, is a bit up and down here. His character is given two modes: either he screams everything in impotent fury, or he understates his lines, most hilariously in a scene where Wolfgaur drops a hostage from an air tram and he mutters “goddamit, he killed her” with less emotion and conviction than the robot Paulie owned in Rocky IV. Pairing the script down to its barest roots while an advantage at first, becomes problematic as it cuts out most of his relationship with his on again off again girlfriend, Lindsey Wagner, thus lessening the impact of the film’s final scene, which for those like me grew up watch Terror in the Aisle, have had spoiled many years ago. 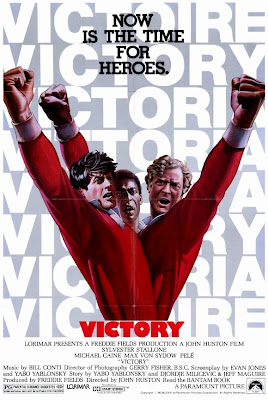 With his frequent writing, producing and directing credits, it’s safe to say that Stallone has more cinematic ambitions than either of his two brethren in the 80’s/90s action heroes with Republican ties: Arnold Schwarzenegger or Bruce Willis. But, at least both Arnold and Bruce seemed more willing to allow a strong willed director like Quentin Tarantino, Paul Verhoveen, James Cameron or John Milius to push their range or challenge their image. With all due respects to Ted Kotcheff, John Landis and Renny Harlin (heh), and not counting Woody Allen (Sly portrayed hood on the subway # 3 in Bananas), John Huston is by far the strongest director that Stallone has ever collaborated with in his career, even if it was towards the end of his life and he was honestly in check cashing mode (Annie directly followed this), in fairness, his wonderful, eccentric and deeply personal Flannery O’Conner adaptation Wise Blood was only two years prior. Huston provides the film with an epic sweep but cannot save it from the silliness of the script and its ludicrous finale.

Victory (or Escape from Victory as it’s known in England) concerns British POWs, amongst those a soccer coach (Michael Caine) who makes a gentlemanly bet with a sympathetic SS officer (Max von Sydow) that using only prisoners he can form a squad that can compete against and even defeat the best that Germany has to offer. Thinking themselves the master race, and impervious to losing, Germany accepts the wager. I know what you’re thinking reading that description: sympathetic SS officers? British POWs? Soccer!?!?! I have a feeling the producers had the same thought, and as a result they shoehorned Stallone’s brash, desperate to escape, and (the only) American POW, to entice US audiences. And frankly, they could have fit him in more seamlessly, however, it does provide Stallone the opportunity to play in a Steve McQueen type role, though he (or the character) is too whiny and petulant (remember this is a British film’s depiction of an American, albeit it one directed by an American) to pull off the cool that McQueen effortlessly projects throughout his career, including most notably, comparatively speaking, The Great Escape.

Huston keeps the film running at a good clip, but ultimately the ridiculousness of the final climactic soccer game sinks it into mediocrity. SPOILER WARNING: It all comes to a head during halftime of the match, through his work with the French resistance; Stallone has procured their assistance in an escape via the locker room. The players have to choose between prideful competition and freedom, an especially heavy decision seeing how the team features two Polish players on temporary release from a concentration camp. Ultimately, they choose to play on, and the film descends into the most crooked sporting event this side of the Hannah Barbara Wacky Racers cartoons, and the previously dignified German team becomes the more typical personifications of evil we are more used to (and to be fair, they are Nazis), a far cry from the more Grand Illusion inspired relationship between Caine and von Sydow. The film culminates in a historically and intelligently inaccurate absurd “everything works out great” conclusion where the team gains not only sporting superiority, but their freedom.

One must credit for Stallone for trying different type of roles post-Rocky superstardom, especially since the major knock on him is the lack of range displayed in Rocky, Rambo, Cobra, Over the Top, etc. He seems a strange fit for both of these roles, perhaps this is me just projecting my image of who he is and would become, but he comes across as being out of his element in both Victory and Nighthawks.
Posted by Colonel Mortimer at 7:10 PM

Fine look at this pair of films from '81, Colonel. I remember them well. NIGHTHAWKS is reasonably entertaining (and thanks for the background tidbit about it being originally a FRENCH CONNECTION sequel). I think I like it more for Rutger Hauer villainous debut. VICTORY on the other hand simply deteriorates as it goes on. It tried to latch on to one of the early soccer waves for the U.S. (but THE LONGEST YARD it's not). I saw it in its original run in a theater, and later on VHS rental. And I've never sought it out since. Perhaps, that is because I only want to remember Huston for films like THE MALTESE FALCON, KEY LARGO, and other classics rather than VICTORY.

Great start to this series, my friend. Thanks.

it sounds like we are on the same page on both of these films. Hauer truly shines and, of course, next year he'd go on to an even better villainous performance in Blade Runner.

Huston did some interesting work in the 70s: Wise Blood and Fat City most notably, but yeah, I would recommend his collaborations with Bogart: Maltese Falcon, Key Largo and Treasure of the Sierre Madre for novices and Victory really for any Huston completests.