A Tale of Two Mechanics 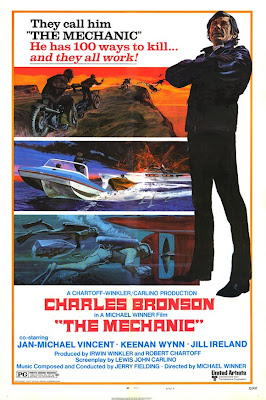 The Mechanic (1972, Michael Winner) opens with a dialogue free ten minute sequence as we witness Arthur Bishop (Charles Bronson) carefully preparing for an assassination attempt with the pulsating Jerry Fielding score and background noises emanating from the Downtown Los Angeles slum apartment he's staying in providing the only sound before Bishop successfully get his target in an explosive triumph. It’s an impressive cinematic achievement for Michael Winner who could show, and had in several films, a knack for phoning it in, a claim that could not in any way be foisted upon this film. Bishop is a solitary man, successful at what he does, namely kill people, and is highly compensated for it. He would be at home in one of French auteur Jean-Pierre Melville's muted color crime epics like Le Samouri. He does the research, keeps his mind and body agile, and always gets his target.

Early though we see the cracks in his loner façade, he pays a prostitute (Bronson’s wife, Jill Ireland) to put on a charade where she’s emotionally devastated that he hardly ever visits her, and upon blacking out at an aquarium, the routine questions the doctor asks about family drive the point home that he’s got no one. An unlikely bond is formed with the son of a friend and recent mark, Steve McKenna (Jan-Michael Vincent), who on the surface is Bishop’s polar opposite: young, petulant and extroverted. But McKenna impresses Bishop when he watches his cool detachment at the suicide attempt of a girlfriend. The culmination of the longing for some connection and guilt at killing the young man’s father leads Bishop to taking the young man under his wing. I won’t give away the ending, but needless to say, it’s dark, tragic and completely appropriate considering the character of these two men.

Winner’s direction is superb. Unlike something like The Transporter (starring, well, who do you know, Jason Statham) he’s completely confident enough in the strength of the Lewis John Carlino’s script to not have to resort to lazy voice-overs detailing the myriad “rules” of Bishop, they come across via action and the expressions on Bronson’s impenetrable face. Winner and cinematographer Richard H. Kline often frame Bishop in off-kilter angles that serve to remove his character from normal clear views or place him amongst crowds where he disappears in anonymity. Even his home in the hills of Los Angeles is symbolic, not only in a location that like Bishop provides voyeuristic opportunity to look at people from a distant high locale but also in it’s architecture with walls that tilt downward. Recently, many people have read the film through a homosexual lens, saying it’s really a love story between the two men. While I think it’s a little more innocent than that, more of a father and son relationship, it’s worth noting for those reading into that particular subtext that there’s at least three shots where either Jan Michael Vincent’s crotch or butt are in the foreground and Bronson's smiling face is in the background.

The Mechanic stands the test of time, it’s status as a Bronson vehicle probably led it to be undervalued by mainstream critics of the day, but like many of the best American films from the era there’s a depth and respect for the art of filmmaking coupled with it’s still enjoyable on the surface action. Winner and Bronson would continue to collaborate, most notably on the first three Death Wish films, but their collaborations would never yield the highs they do here. 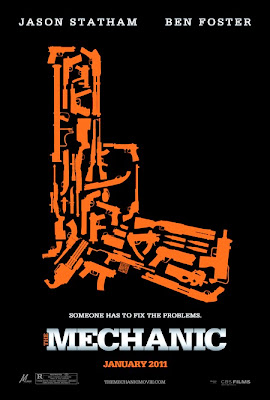 Surprisingly, Simon West’s 2011 faithful in plot details if not tone remake, also opens with a dialogue light assassination attempt, albeit it one about a third of the length of Winner’s film. However, the major difference is that there’s absolutely no time spent on Arthur Bishop’s (Jason Statham) preparation, with the emphasis instead placed on the heavy difficulty of the task at hand: the countless armed bodyguards, the limited amount of time he has, an underwater haven and a jump off a large bridge. Which is telling for the film, a decent action movie on its own that suffers immensely in comparison to the original.

If a modern day actor had to take over for Bronson, Jason Statham is a good choice. He’s got the look, chops and a sense of humor, and is one of a very small number of modern action stars that I could actually see being on the Canon Film roster if he was around in the early to mid 80’s. However, and more the fault of the reworked script than the actor, his Bishop is a completely neutered creation. He seems to assassinate only “bad guys” whereas Bronson’s character didn’t care, the one questionable murder he does commit he’s ultimately let off the hook for by a third act twist, he even seems to be have a better relationship with his frequented prostitute, and gives her a puppy at one point! There’s little sense of the nihilistic streak or even the pride of his work displayed in the original. And due to Statham’s younger age and more defined physique compared to a then fifty-one year old Bronson, the sense of someone whose life is nearing the end and not having any companionship is completely lost. As for Ben Foster in the McKenna role, I don’t think anyone would doubt he’s a more capable actor than Vincent, however Vincent nails the role, and Foster plays him as a brooding broken man cliche whose true emotions are never hidden below the surface.

Director West who has helmed some of the worst movies of the last decade or so: Tomb Raider, The General’s Daughter, the When a Stranger Calls remake (hey, are you noticing a trend), actually does an admirable job here, it’s quickly edited and features perhaps the lamest of recent special effect trends: the dreaded CGI blood squibs, but the cuts are never of the avid fart variety and it’s shot clearly and crisply, using a few good New Orleans locations. It’s a solid modern day action movie, but there’s no such need for such qualifiers for the original, which is a great film pure and simple.

I did watch a film this week that I found closer in spirit to the original Mechanic than its remake, and that’s the Anton Corbijn directed, George Clooney starring The American. I know that this film gained notoriety for featuring some of the worst scores in Cinemascore history (speaking of which has anyone ever actually been given a Cinemascore review card following a screening? It’s never happened to me), and was considered “slow” by modern audiences, but I don’t know, I was enthralled from start to finish. It features a minimal amount of dialogue, appropriate for Clooney’s character, a lot of attention and detail is spent on his creation of an assassination weapon, and hints and clues of his character traits are revealed organically via action, dialogue and Clooney’s reactions. Shot in Italy and Sweden, it’s full of exquisite cinematography, a sense of rising dread, and beautiful locales and women. Considering its reputation, it’s very straight forward, and I recommend it to fans of the original Mechanic and director Jean-Pierre Melville.
Posted by Colonel Mortimer at 9:00 PM

Thanks for the reviews, I am glad you somewhat enjoyed the new Mechanic (I noticed we both gave it a B-...great minds!). I will have to watch the original, I actually had no idea it was remake having never heard about the Bronson film anywhere. I also have been meaning to check out The American, now I will try to do so faster.

Well, I'll very much agree with you on your thoughts and insights regarding the original THE MECHANIC and the highly underrated THE AMERICAN. And for the most part, I'd agree with you about what works with the new THE MECHANIC, and what doesn't. However, the filmmakers (or studio heads, media consultants, or whatever) attempts to establish Statham's Bishop as a principled assassin rings of a corporate 'safe' decision. Bronson's version couldn't care less who he kills, Whether they're 'good' or 'bad' isn't a factor to him. The new model is 180° from the classic Charles Bronson 70s anti-hero.

As well, for an action movie (cause it definitely isn't in the same vein of the original film) it makes what I think is a cardinal sin by losing the audience's way in many of its action sequences. I thought the editing decisions almost made the leads appear out of magic in various scenes via the cuts. Besides way too many big explosions and emptying-of-gun-clip moments, its choreography was too haphazard (something someone like Michael Mann would never do) in their staging. The original TRANSPORTER (though not a great film) had action scenes that didn't have its audience getting lost.

And that ending! I have a big issue (***spoiler warning***) with that finale. Yes, the filmmakers throw in something similar to the original (especially for Ben Foster's character). But they definitely veer away from the more bleak ending of the '72 film. I mean really -- Bishop skillfully and miraculously escapes the assassination attempt by his protégé?!? Of course he escapes unscathed. I mean he's a 2011 hero... and must survive for the sequel, for chrissakes! Sorry, but give me the more brooding 70s film with Bronson (or THE AMERICAN) any day of the week.

Please don't take my criticism of the remake as anything bad directed toward your review of these films. As usual, it's a wonderful piece of writing and examination, my friend. Thanks.

p.s., I'd also agree that those listed director West films are not very good, but I put THE GENERAL'S DAUGHTER as one in the it's so bad it is entertaining class.

Hi leopard glad to hear you're a fan of the original Mechanic and the American. I totally echo a lot of your sentiments with the remake, and the ending is exactly what's wrong with the film, and modern action movies in general.

I guess I've seen so much bad editing in modern day films that I actually thought West showed some restraint in that particular aspect. Glad to hear your thoughts, like I said I think the remake is "okay" for what we expect today, but the original is a flat out masterpiece!