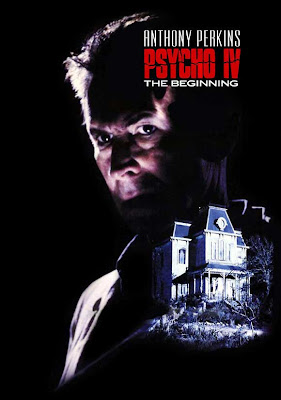 Serving as both a sequel and prequel to the original Psycho (and it’s two “official” sequels), Psycho IV: The Beginning (1990, Mick Garris) is indicative of a trend that started popping up in the late 80s through mid-90’s where long standing horror franchise were coming to the realization that as the millennium was coming to a close, most likely, so were they. Henceforth, in a storyline that encompassed both Halloween 5 (1989) and Halloween 6 (1995), Michael Meyers was revealed to be under the control of some kind of druid cult; in Freddy’s Dead: The Final Nightmare (1991) it’s unveiled that three demonic trolls allowed Freddy Krueger satanic squatter’s rights to terrorize the dreams of teenagers and making him impervious to any real world death, save of course being pulled out of the real world via his anaglyph 3-D glasses wearing daughter; and last and perhaps least in Jason Goes to Hell: The Final Friday (1993), we learn that Jason Voorhees heart possesses all of his strength and that it can be transmitted person to person a la a poor The Hidden rip-off. Psycho IV: The Beginning would be the last Anthony Perkins starring entry in the series, and the first to eschew theatres, premiering on pay cable channel Showtime on November 10th, 1990, four years after Psycho III’s theatrical release (my review). Bates Motel (my review) which began as a potential pilot for a new series also was made for television; however the events in that film are completely ignored, much as it ignored the two sequels.

Norman Bates has been rehabilitated since the events of Psycho III, or at least in the eyes of the extremely lenient Fruitvale judicial system which lets a multiple murderer off after serving less than half a decade behind jail. He’s now living in suburbia and is married. One night during a radio call-in show where the host (CCH Pounder) is interviewing his old psychiatrist, Norman anonymously phones in and relates the story of his past, told via flashback, and this present day quandary: his wife against his will, has become pregnant with his child. Is his child destined to the same fate of a life of cross dressing, peeping tom foolery and murdering? And if that’s even a remote possibility, doesn’t Norman owe it to any potential future victims to kill his wife and unborn child!

Helmed by director Mick Garris, who I like to refer to as the horror genre’s Zelig (of Forrest Gump if that’s a more recognizable reference to you) in that he has asserted himself into relationships with many of the greats of the genre, but without a quality input to match his famous friends. He has a tremendously strong relationship with Stephen King, having directed five of the author’s film adaptations, as a college student he hosted a cable access show wherein he conducted a round table interview with many of the modern day horror greats: David Cronenberg, John Landis (who has a cameo as the radio show's producer), and John Carpenter (I posted those clips back in October here), and he hosts an annual Masters of Horror dinner which unites horror film directors of all ages and actually turned those meetings into a Showtime aired anthology show called Masters of Horror which gave work to some filmmakers who had fallen out of flavor in Hollywood such as Joe Dante, Landis and Carpenter. His enthusiasm is appreciated and from all accounts he’s a hell of a nice guy. But here’s the thing, he’s not a good filmmaker in his own right. His films lack a voice or vision and his relationship usually clouds his decision making. Garris is the guy you call when you want a fidelitious remake of The Shining to course correct that meddling madman Stanley Kubrick (King’s opinion, not mine, it was my # 2 film of 1980). For example: I’ve only seen five of the Master of Horror episodes, but amongst the ones I did see include the worst films of both Joe Dante and John Carpenter’s careers.

Whether it’s the result of the script written by Joseph Stefano (screenwriter of the original) or Garris himself, Psycho IV, even though starring Perkins can’t help but feel like fan-fiction. There’s a litany of visual shots, plot devices and dialogue from Hitchcock’s original sprinkled throughout commenting on nothing, just gentle, “hey remember the original?” fan service. So we get another car sinking into the marsh, another peep hole, and, yes, Norman tells the talk show host that a boy’s best friend is, get this, his mother (a bit of catchphrase issue I’ve always have had with sequels, do people in really life always remember that one clever thing they said that one time, like “yippee ki-yay-motherfucker” and repeat them socially ad naseum? If you were friends with that person, wouldn’t that annoy you? Psycho IV reaches so far in the well that they trudge up the “trusty umbrella” line) and the answer is yes, I do remember the original, and I should probably be watching it instead of part IV. Contrast with what Richard Franklin did with part II (my review); Franklin who was literally a student of Hitchcock also referenced images from the original but to perversely play with our perceptions. Credit should be given to Garris and cinematographer Rodney Charter, the film may feel like a made-for-cable enterprise in structure and scope, but thanks to the use of anamorphic framing and a keen eye, it at least looks like cinema.

After my main complaint in my Psycho III review being the sense of routine in Perkins’ performance, it was nice seeing Perkins looking so well so close to his death from AIDS here, that it is hard for me to objectively critique it. Though I will say that he doesn’t have much to do, he’s limited to one set for the first two Acts and mostly talks on the phone in those scenes, before finally making his way back to the scene of the crimes in the film’s finale. Henry Thomas, the lead of another iconic Universal film, plays Norman as a teenager, sexually confused and obsessed with his mother Norma, a still great looking Olivia Hussey, and, frankly can you blame him? Due to the structure of the film: intercutting the telephone conversation between Norman and the talk show host with non-linear flashbacks, neither Thomas or Hussey ever get their performances into any sort of rhythm and they come across as the basest one note of their character—domineering, unstable and needy for Hussey; nervous and timid for Thomas.

Psycho IV again displays the major fallacy of “prequels”: backstory does not result in compelling storytelling. The one interesting aspect that the film raises is the question of nature versus nurture in terms of Bates’ insecurities that his psychological issues will be passed down to his child, although the film stacks the deck against any chance of ambiguity by having Norma be such a crazed (psycho, if you will) unrelatable individual that it’s highly unlikely unless Norman’s wife forces his child to dress in transgendered clothing and locks him/her in the closet for hours on end there will be any repercussions. It also weakens Norman’s character and gives a lame simple prognosis to what should be a much more complex and ambiguous character.

This would be the last time Perkins ever swallowed candy corn on screen, as he sadly passed away in 1992 at the age of sixty. Although he acted in numerous films and plays and had a career as a recording artist (a field his son took up), his obituaries always started and ended with Norman Bates, ironic considering that he was cast against type originally.

Next up: Gus Van Sant, you’ve just had your first huge financial and critically lauded Academy Award nominated success, what are you going to do next? Wait…what?

Posted by Colonel Mortimer at 8:48 PM

I enjoyed this movie a long time ago, I think I found it on cable one night and was hooked in. I wonder how it would hold up if I watched it again. Good review. ET meets Psycho, I like it!

I enjoyed very much the first sequel (II), but never tried out the III and the final one. Interesting points you make on director Garris. He was the one on stage last year interviewing John Carpenter at The Egyptian for the JC retrospective. His '97 redux for THE SHINING is more faithful to King's novel (it's this book I think that really began to garner him more fans back in the day), but it lacks the visual and atmospheric panache Kubrick gave his version. No surprise that across movie fans (and even King aficionados) that its Kubrick's which holds up over the years. Although, I must admit I do like Carpenter's ep's in MASTERS OF HORROR. Perhaps they're paycheck films, but you know they're JC's ;-). Wonderful review. Thanks, Colonel.