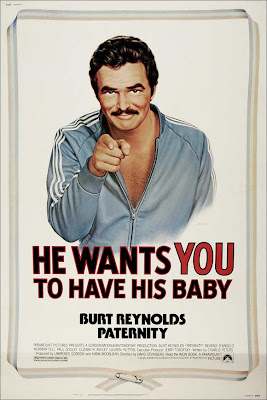 Amongst Burt Reynolds’ acting heroes was the effortlessly charming, always dapper cinema legend Cary Grant. On the surface the two men couldn’t have more contrasting screen legacies: Grant the sophisticate, Reynolds the good ol’ boy, however, look closer and the influence of Grant can be seen in some of Burt’s acting choices, including his two financial disappointments At Long Last Love and Nickelodeon directed by another Grant fanboy, Peter Bogdanovich. Paternity, the second film with Burt in the leading role released in 1981, bears the mark of Reynolds attempting a role better suited for his hero, unfortunately the imaginary version of the film starring Grant is far superior to the actual reality.

Buddy Evans (Burt Reynolds), the directing manager of New York’s Madison Square Garden, is a single 42 year old lothario (and let’s credit Burt for actually playing a character so close to his actual age) who’s struck with a bout of baby fever, a desire which leads him to cut out of important board meetings early to play basketball with the son of his close business confidant (the great character actor Paul Dooley is the father, and a pre Christmas Story Peter Billingsley plays the boy). He decides to search for a woman who will for the right price bear his child and leave him to be the sole parent. Maggie (Beverly D’Angelo), a struggling student with dreams of living in Paris, appears to be the perfect candidate: single, not looking for attachments and in dire need of money. But will genuine emotion stand in the way of the business arrangements? No spoilers, but if you’ve ever seen a romantic comedy, I am guessing you can figure that one out for yourself.

The basic premise for Paternity is ripe for a potentially funny comedy of manners with the unique twist of a man feeling his biological clock ticking. One can see the hilarious and honest comedy that Preston Sturges or Billy Wilder could mine from this premise. Unfortunately, screenwriter Charlie Peters (Three Men and a Little Lady, Hot to Trot, Krippendorf’s Tribe) reduces everything to familiar sitcom beats, such as a scene where Lauren Hutton comes in for a job interview which Reynolds believes is an interview to be the surrogate mother, and well, hilarious Three’s Company style mistaken intention hilarity ensues (or doesn’t actually). Paternity marks the film debut for director David Steinberg who would go on to have a long distinguished career in television, directing episodes of Seinfeld, Curb Your Enthusiasm and the Burt Reynolds’ CBS series Evening Shade. Steinberg fills the film with an able supporting cast (besides D’Angelo, Dooley and Billingsley, Norman Fell has a small role as Buddy’s lawyer) but everything else about the film is blandly shot and paced.

Ultimately the film’s major flaw* lies in Reynolds’s lead performance. It’s a tricky role that requires an actor who can remain likable while doing some shitty things, such as in one of the film’s few genuine laugh inducing scenes where Buddy arrives with a date and intoxicated to a Lamaze class. Reynolds has the same blank stare and somnambulist distance of merely line reading as in his performance in Cannonball Run and his character comes across as a disinterested prick. It’s a fine line to balance, and requires a lot from an actor. I think Burt was capable, but was either unengaged or was not pushed by a rookie director. Perhaps George Clooney could pull this role off, or a more classic actor such as Clark Gable, or, you know who’d be really great: Cary Grant.

Yeah, Burt's sleep walking through this one. I do appreciate the women characters a lot more than his role. This from the same actor who did so well in stretching himself with STARTING OVER a couple of year before. The film does disappoint, but primarily because you know Burt can deliver when the desire is there. Thanks, Colonel.