Further Lamentings for the Changing Ways We Watch Film

Having neglected this blog for a while I thought I would return and discuss two film related topics, one having to do with the possible fate of the world's most famous movie theatre, and the other, a recent discovery that returned me to a former favorite haunting ground, the video store.

To give some personal history, shortly after enrolling in college I worked at a movie theatre (the now demolished UA Metro Center in Colma, CA), and would work at three more before retiring from popcorn slinging. At some point, much like the trajectory of the films themselves, I inevitably ended up working at a video store. So, obviously I have a highly subjective view on these two topics, so take my discussion with the prerequisite ounce sized grain of salt.

What the hell is happening to the Grauman’s Chinese Theatre? 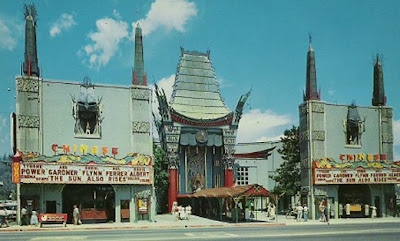 Will the world’s most famous movie theatre stop showing films on a regular basis soon? That’s the rumor as the bankrupt (and disgustingly poorly operated) Mann chain has sold it’s ownership rights to Elie Sa'maha and Don Kushner, movie producers and businessmen with an (apparent) disreputable history. A few weeks ago there were whisperings that the new owners planned to renovate the interior of the theatre to make it a trendy nightclub, because, I don’t know, I guess Hollywood doesn’t have enough venues for the young Hollywood elite to sniff cocaine off a hooker’s ass. At this point nothing has been confirmed, and this is all rumors and conjecture, though neither Sa'maha or Kushner have refuted anything, but as Rose McGowan so elegantly put it in Scream “you can only hear that Richard Gere gerbil story so many times before you start to believe it."

If that’s the case it will be the end of a slow and sad demise for the beautiful theatre (and historical landmark) as Mann failed to respond in any formidable way to changing trends and watched as the Arclight and the Cinerama Dome got the prime bookings and the Chinese was stuck with six to seven weeks run of such second tier titles like Paul, Book of Eli, and the nadir: a month plus run of Street Fighter: The Legend of Chun Li a couple of years ago. I have to think when the news hits more mainstream press (and when the hell is that going to happen?) there will be some groundswell support to save the Chinese, and it’s a registered Historical Landmark so the building itself will still be there until the apocalypse hit (which is May 21st according to billboards around town….wait a minute that’s exactly the day after Mann’s lease runs out, coincidence or harbinger?). Mann’s final “fuck you” to Southern California film goers by not selling the Chinese to an actual theatre chain/operation, like the American Cinematheque or even Pacific which successfully operates the El Capitan right across the street, insures that I will be pissing on the ashes of the once mighty corporation.

If you live in a town with a one screen theatre you treasure, heed this warning: visit it often, because if the Chinese theatre’s future is uncertain, no theatre is safe.

Back to the video store 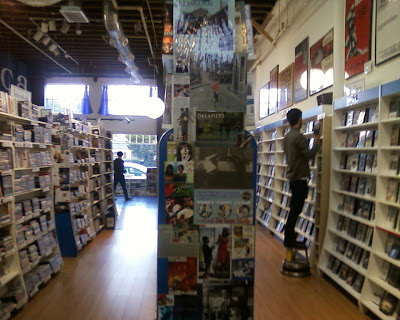 I am sadden to see the death of the video rental store, and guilty as everyone else. See the convenience of Netflix with no late fees and streaming options, as well as cable and a DV-R, has led me to forgo the experience of tolling the aisles. Like Mann’s demise, I have no love lost for the bankrupt corporations like Hollywood and Blockbuster video as they're more responsible for the death of independent mom and pop video stores than Netflix when backdoor deals enabled them to fill their shelves with hundreds of copies of whatever was the big release of the moment (I remember the original Fast and the Furious film particularly being one that customers at the shop I worked at saying they’d try big blue for) while keeping pathetically inept stock of older titles. The easy accessibility of porn online also was a crushing blow.

After visiting the South Pasadena Farmer’s Market one evening recently, my wife and I stepped inside Videotheque and my love affair with video rental stores was instantly rekindled. Full of titles on Blu-Ray, DVD and yes even for those not on either format, VHS, the store is obviously ran by cinema lovers as their genre section are further subdivided into sub-divisions such as: directors, stars and even genres within genres like silent films and giallos. How can I not love a place where Meiko Kaji is designated worthy of her own section!

Additionally they seem to upgrade titles that are reissued regularly (for example they have the recently released Criterion issue of Blow Out) and stock Warner Archive titles that are otherwise unavailable short of purchasing a hard or digital copy. The staff is knowledgeable but not pretentious, and it warms the cockles to see it full of customers on a Friday night.

If you live within a short drive of Eagle Rock/Pasadena, I cannot more highly recommend Videotheque, check it out.

Posted by Colonel Mortimer at 7:16 PM

That would definitley be sad if Grauman's was to stop showing movies and turn into some trendy after hours club. I remember seeing many movies there as a youth and more recently (or not recently at all) seeing Star Wars Episode 1, and feeling I was seeing it somewhere special at the time.

Maybe I should go to a video store and try to rent Blow Out since netflix keeps saying it has a long wait, but only after I send in my next disc (is netflix getting shady?), this never happened before but lately they are saying the movies have no wait and then after they send me my next movie from nowhere there is a wait on my top two movies, interesting to say the least.

I first heard this horrible rumor via Mr. Peel's tweet about it. If this happens, it will be the absolute worse thing that could happen to southland movie goers and those who still appreciate the history stored in the grand theaters. I'm really upset about this, for sure. This is the destiny of things left to corporate decision-making. SHIT!

Since I do travel out to Pasadena on a periodic basis, I plan on going out to Videotheque and make a point of giving them some of my business. Like the closing of many of the independent bookstores locally, we're the poorer for it when establishments like these are left to wither on the vine. Thanks for spotlighting this one, Colonel.