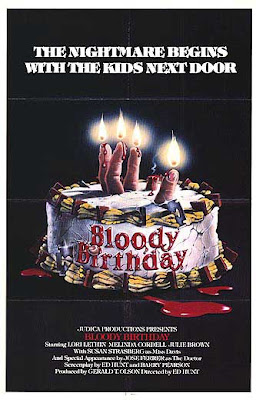 There's a ruthless murder roaming the small California town Meadowvale, actually make that three: Debbie, Curtis and Steven, three precocious tykes whose shared 10th birthday is just around the corner. These children were all born within minutes of each other during a solar eclipse that we learn from our final girl Joyce (Lori Lethin), an astrology junkie, means that the sun and moon blocked Jupiter leading to a certain emotional disconnect. And she couldn't be more right, as the trio methodically dispose of such annoyances as teachers, parents and friends via such means as repeated hits over the head with baseball bats, burying alive or just blowing them away via a stolen revolver, all with a dispassionate, clinical precision.
While paying close adherence to genre conventions, Bloody Birthday embraces it's potential ridiculous conceit, seeing it through to the end without ever entering satirical territory. It's the Bad Seed meets Halloween, and it's a joy. In fact, while not the cinematic titan or anywhere near as atmospheric as Carpenter's classic, the film plays as a parallel universe version of Halloween, if Michael Myers never was sent to an institution as a child, continued the killing spree he started that fateful Halloween night, and had two friends assisting him.
Director Hunt keeps the film moving along at a good pace, and grounded even while the script (which Hunt co-wrote with Barry Pearson) goes full tilt into a more and more demented place. A nice touch is while the kids are smarter than any of the ignorant adults, and capable of easily manipulating their older prey, they are still kids and prone to wrap their more sadistic tendencies with such childlike vocations as playing hide and go seek. They even keep a scrapbook of their crimes! The cast is game, especially the pigtailed and cherub faced Debbie (Elizabeth Hoy) and Curtis (Billy Jayne who would go on to play the brother in Just One of the Guys and the best friend on Parker Lewis Can't Lose), the glasses sporting mastermind whose a pint size Dirty Harry with a gun. Lethin is good in the plain Jane/Jamie Lee Curtis surrogate role, and has one of the more memorable scenes when suspecting Curtis has poisoned the frosting on a birthday cake, goes through the party knocking over plate after plate, only to be tricked into looking like a paranoid fool in front of the entire community. Comedian Julie Brown makes an early, and frequently naked, appearance as the sister of Debbie, and look for future American Ninja Michael Dudikoff in a small role. Bloody Birthday is a fun, jaw dropping experience, and deserving of the cult status it has gained. 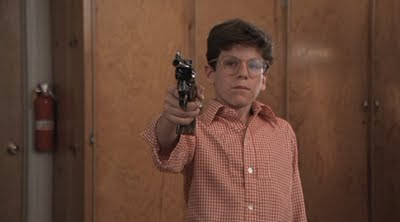 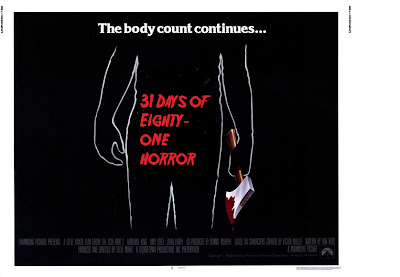 I've never seen this one film and you've got me curious. Thanks, Colonel.

This one sounds really cool, I have never heard of it before this posting. I will have to check this out soon, is it on netflix?

It was just released on DVD through Severin, nice print, I think its on "Saved" status at Netflix currently. I rented it from the cool store in South Pasadena, I think you'd dig this one a lot.