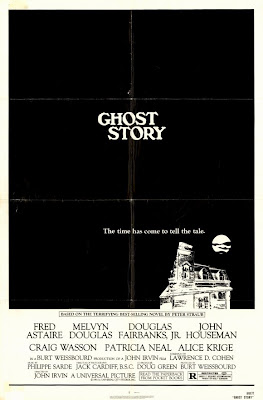 The premise of Ghost Story, four elderly men with a macabre secret from their past who meet weekly as the Chowder Society, where they tell one another scary stories is rife with potential for evocative subtext leaden spectral vengeance. Does this fifty year old practice really serve as a sort of coping mechanism for their guilty consciousness? Or is it possible subconscious self-punishment? And what happens when the spirits set their sights on the offspring of the Chowder Society members? Perhaps Peter Straub’s bestselling 560 page novel delves into these aspects…or at least is a compelling narrative, because unfortunately, the film adaptation bungles the promising premise and is a tonal mess and a bit of a dirge.

Director John Irvin, who did a fine job with the exciting mercenary film Dogs of War (my review) which was released in February of 1981, and screenwriter Lawrence Cohen (not too be confused with It’s Alive b-movie auteur Larry Cohen), certainly have some high ambitions for the film: dream sequences, long flashback sequences and no strict leading characters, that give it a more novelistic approach than a straight three act structure, but it feels like too much was condensed from the novel to fit a just under two hour running time, resulting in a film that feels too short for its ambitions, but too long for what it actually is. The film opens with an effective sequence showing the four elderly leads (Fred Astaire, John Houseman, Douglas Fairbanks Jr, and Melvyn Douglas) being shaken from their sleep, set to an effectively eerie score by composer Phillipe Sarde. The film has nice snowy atmosphere, but Irvin has no feel for manufacturing thrills or working with special effects, diminishing what should be the film’s strongest moments. From there on, most of the scare tactics are juvenile jump scares and ineffective.

The other major flaw is the film’s schizophrenic tone. A major marketing of the film was the assembled cast from Hollywood’s past, but what’s not accounted for is that with the exception of Douglas none of the foursome is exactly known for their horror chops (though Houseman appeared in 1980’s The Fog and Douglas in The Changeling), and only Houseman actually seems particularly interested in the genre at this point. And sexuality is a major component for a movie starring several elderly people; hopefully the audience who grew up watching Astaire films appreciated their glimpses at a full frontal Craig Wasson! 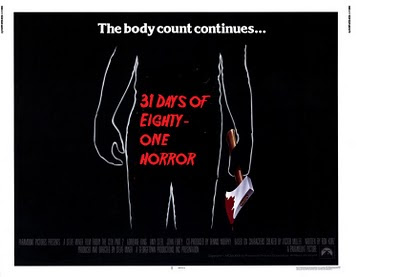 Always wanted to love this, but always felt a bit lost, and bored.

Didn't know there was a book. Maybe I will look into reading it and getting a better handle on the tale.

I did read Peter Straub's source novel when it became a bestseller and felt the adaptation was poorly done. The atmosphere just wasn't there in the film. It does have a solid cast, but this one came up short, surprising for John Irvin. Good look at this one, Colonel. Thanks.

The novel is evolving and quite complex....oh and scary as hell! But it is way over 500 pages long and would be hard to fit into a time frame that studio would be willing to release at the time. also, I think that some of Lawrence Cohen's screenplay could have been tweaked by Irvin and team. It is a shame that no one has attempted it since, though! I mean in this age of remakes!!!?? I do have a sort of fond attachment to the them film though, because when it came out a SERIOUSLY underaged me and an equally seriously underaged cousin managed to convince my mother to take us to see it. We were lucky she didn't march us right out! I mean at that age...the opening "waving flaccid" is well...interesting. Enjoyed the post, Cheers and Happy Halloween!