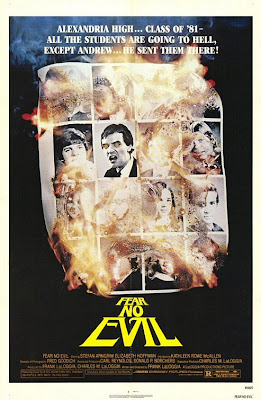 A passion project for Frank LaLoggia (the name the tabloids would give the union of Frank Langella and Robert Loggia if they ever became a couple, and you know, fingers crossed) who directed, wrote, co-produced, and provided the score, Fear No Evil comes at the tail end of the seventies religious themed horror films (The Exorcist, The Omen) which would fall out of flavor in the 1980’s to the cheaper slasher genre. But more than those two films, it owes a debt to Carrie, as it concerns teenagers and high school outcasts coming to grips with possessing otherworldly powers. In a pre-credit sequence we learn that the antichrist enters the bodies of newborn children every generation. Two Archangels in charge of preventing the Antichrist from reigning follow suit to stop him. Cut to the christening of Andrew Williams (Stefan Arngrim) an adorable baby who profusely bleeds from every orifice as holy water drips upon him. Eighteen years later he has driven a line between his dotting mother and annoyed father, whose lives and home are now in disrepair. Andrew is the smartest kid in school, but dismissed by all others, including his crush Gabrielle, who unbeknownst to even her, is one of the Archangels meant to stop him.

I mentioned the parallels to Carrie, but I think the film would have been stronger if it had more in common with that film, and Andrew, like the titular character of the Stephen King story, was slowly realizing his purpose through the course of the film. By the first time we see him as an eighteen year old, he’s already practicing black magic and playing tricks on his parents and students. It would have at least given the character an arc, instead of the one note it plays as. LaLoggia definitely has aspirations to tell a big story, and for a low budget film it has high ambition employing frequent use of special effects and set amongst multiple eras. In his favor he found a great shooting location in New York with a castle, its surrounding lakes and constant shrouding fog that I actually assumed was shot somewhere in Europe, and he stages a very intricate operatic ceremony for Andrew’s evil coming out to counter attack the town’s annual reenactment of Christ’s crucifixion (good times!). However, the special effects is really bad animation with a vomitorium of colors that when they overtake the action in the final conflict, distract to the point I could not concentrate on a single thing happening on screen. The film drags, is indifferently shot and edited and contains a choppy, unfocused script. The main actors are wooden and fail to enliven the already thinly drawn characters. Typical of the depth of the characters is the fact that the manner of dress and style by the “hoodlums” imply that LaLoggia, or his costume designers, thought Grease was a documentary on modern teenage life. Somehow though the film was able to secure a killer soundtrack featuring the likes of Talking Heads, Richard Hell, the B-52s, the Sex Pistols and Boomtown Rats.