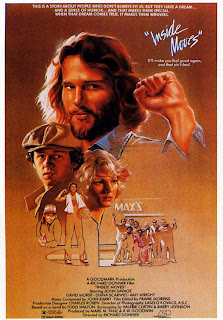 Inside Moves is the most leisurely conceived and smallest budgeted film of director Richard Donner's career, which after 15 years in television, officially kicked off in 1976 with the horror hit, The Omen. Coming in the wake of being fired from the first Superman sequel he had already started work and filming on by its producers the Salkinds, the change provided Donner a brief respite from the rigors of the high profile blockbuster game and a chance to show some dramatic flare. Presented at first as a sparsely plotted character study of a man trying to rehabilitate his life after a failed suicide attempt left him crippled (which could possibly serve as a metaphor for Donner post-Superman brouhaha) the film sails along nicely at the start until some late second act narrative mechanics get tossed in, eventually leading to it's ruin as the director's worst audience pandering instincts kick in for the final, insufferable act.

In a city outside of San Francisco, it's never actually named that I caught, but I assume Oakland, though most of the film was actually filmed in Downtown Los Angeles and Echo Park, Roary (John Savage, The Deer Hunter) steps into a highrise building (the Eastern building) and jumps out of the top floor. After recovering to the point that he can walk again, though with a noticeable limp, he finds himself at Max's bar, located near the hospital, which is the watering hole for the residing handicapped community. Roary strikes up a friendship with the sunny disposition bartender, Jerry (noted character actor David Morse in his debut film) a once promising basketball player whose career was sidelined by a leg injury; as well as a flirtatious relationship with barmaid Louise, with whom he shares not being emotionally ready to go a step beyond flirting. Jerry, whose leg may be repaired via a costly operation, is in a destructive relationship with a prostitute (Amy Wright, Wise Blood) but too timid to ask his old buddy, a successful NBA player with the Golden State Warriors, Alvin Martin, for the dough. To cut this synopsis short, Roary gets Alvin to pay for the operation, Jerry's career is resurrected, first with a semi-pro team in San Jose, then a call up to the Warriors (a quick career path to the majors that is probably still a possibility today considering the sorry state of the Warriors, actually David Morse, you should call them). On the road to fulfilling his dream, Jerry abandons Roary and the other Max's bar regulars, who are the typical quirky fun loving and smack talking handicapped people that reside in unimaginative screenwriters minds.

As suggested in the first paragraph, the film is at its best when it's focused on the burgeoning relationship between Roary and Jerry, and later, Louise. Savage has a strange onscreen presence, part brooding cipher, part ham (the best example I can surmise is to picture a role that encompasses both ends of the Al Pacino spectrum, with The Godfather part II being on one side, and Scent of a Woman at the other) and good chemistry with Morse, who is still a little raw, and Diana Scarwid, who was nominated for a Best Supporting Actress Nominee, who gives a nice performance that she imbues with a sense of depth, even if her character as conceived is half-baked and saddled with contrived doubts about being in a relationship with the "crippled" Roary, not to mention an unnecessary romantic triangle with Jerry the filmmakers thrust upon late in the game, a completely uncharacteristic turn only there thanks to screenwriters Valerie Curtin and future director Barry Levinson needless desire to add some sort of dramatic arc to the final act.

And the final act is where everything unravels. It makes sense for Jerry to have some trepidation about coming back to the bar, having it remind him of a low period in his life or even thinking he's "too good" for the place now, and the writers hint at that, but the film's major point of conflict is presented in the same manner as a straight out of Lifetime movie-of-the-week moment where Roary pretty much cuts Jerry down to size by saying he might be crippled in his legs but Jerry is...dramatic beat..."crippled in here" (points to heart). The film would've slightly redeemed itself from that embarrassing moment if it ended in some ambiguous or open ended manner, which didn't seem out of the realm of possibility given that it never really emphasized what led to Roary's suicide attempt other than his feeling of "nothingness". But no, instead we get the manufactured everything is going to be great for everybody conclusion, Roary and Louise are going to live happily ever after, Jerry's going to be a big basketball star and the quirky group of handicapped bar denizens are going to stay their quirky self. Most egregiously however, Inside Moves concludes with a bit of cruelty at the expense of minor characters, as Roary, to the delight and pleasure of all, trips Jerry's old girlfriend's pimp and his cronies, who earlier beat Jerry up, causing them to spill down a flight of stairs at the basketball arena...and wait for the punchline: be possibly irreversibly crippled! Ha ha ha!!!! What respect for the handicapped! I guess having the son of the devil and Lex Luthor as heavies in his prior movies made Donner presume he needed to have some sort of comeuppance receiving villain.

With the exception of the opening scene: the suicide attempt, which is the most cinematic in the entire movie, relying as it does solely on the imagery, movement and the dreamlike fall from the building, the film is shot, by cinematographer Lazlo Kovacs, in the soft focus style of late 70's/early 80's soap operas. Which to some extent, it is. John Barry, most famous for composing the James Bond theme, lends a serviceable, but unmemorable score.

Inside Moves was not a big success for Donner, and he spent the rest of the decade making high concept blockbuster films such as Ladyhawke, The Goonies, Scrooged, the Lethal Weapon series and immediately following it, The Toy. Most of which were box office successes. Donner will never be considered an auteur, but he's skilled at adapting a style to whatever best serves the screenplay. His mind is set to think of the general undemanding audience and their expectations and desires first and foremost, which is what makes him the right man for Superman, but not for a internal character study such as this.
Posted by Colonel Mortimer at 11:45 AM