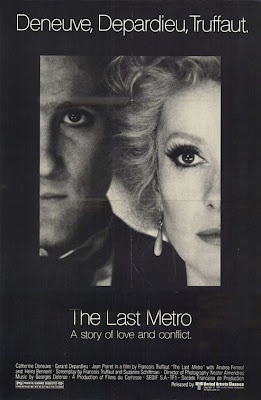 One of his last films, he would follow it with Confidentially Yours and The Woman Next Door before passing away at the age of 52, The Last Metro finds the French auteur and New Wave movement forefather Francois Truffaut continuing the transformation from the narrative and cinematic playfulness of his earlier work such as The 400 Blows, Jules and Jim and Shoot the Piano Player to the more classical Hollywood style he started a few years prior. It was a sharp contrast to his Cashier du Cinema and Breathless co-writer Jean Luc-Godard (the two apparently had a falling out in this period) who was (and still is) experimenting more with cinematic forms and embracing avant garde over typical narrative mechanics. While this may get me labeled a heretic in certain cinefile circles, I've always had a rocky relationship with Godard, I appreciate his explorations on an intellectual level, but dilettante that I am, I often wish they would come within the context of a narrative instead of disrupting it. That said, Truffaut did not quite posses the talent for the classicalism that he embraced, and a little more oomph in direction would elevate The Last Metro from a solid film to a potentially great and more potent one.

Set in a playhouse during the Nazi occupation of France, The Last Metro depicts the production of a play, "The Disappearance", in a theatre owned by an actress (Catherine Denueve) and her Jewish husband (Heinz Bennet) who was a noted theatrical director, but is now hiding in the theatre's basement and directing the play by proxy. An idealistic actor (Gerard Depardieu), who is unbeknownst to most, also a resistance fighter, provides romantic entanglements.

With the exception of an opening and closing montage narrated by Truffaut himself and a closing dénouement that slyly plays with our expectations, the film unfolds in a straight forward manner, even to the point of not emphasizing some of the more tense laden sequences through the use of music or framing, just letting the natural drama play out. As a student of Hitchcock and having employed strong use of tension in The Bride Wore Black, I felt Truffaut missed some opportunities here.

Shot in warm colors, with red being the prominent hue, the film appears to have been shot on a sound stage, which is a little disconcerting when our perception of the large scope of most World War II films is taken into effect, but this was probably a deliberate attempt to mirror the theatre more than cinema, and in a twist, the most cinematic framing and color sequence come from within the staged play itself.

While Truffaut's style may be more muted, two of his pet themes are thoroughly explored: the politics in the act of artistic creation (this was to be the second part of a trilogy that included Day for Night detailing the process of a creative endeavor, the final film was to concern a music hall) and a romantic relationship that is tested through circumstances and a third party. With the exception of Inglorious Basterds, this is the only film that I know of that discusses the Third Reich's desire for artistic superiority, with the irony being that they forced the fleeing or death of some of the most creative and vital artistic presence because of their nationalism. A line in the sand is drawn here as a person's artistic worth in The Last Metro is measured by their conscience. The protagonists are the creative talents such as the director in hiding whose life is being preserved through his art and the antagonists, most glaringly the French critic whose a Nazi collaborator is regarded as prissy and lacking a sense of artistic merit gauging value, and who most egregiously is late for the play he reviews!

The romantic subplot which involves a triangle between Deneuve, Bennet and Depardieu felt forced and not properly set up considering what a big role it plays in the final act. Though I like the suggestion that Deneuve's character who is risking her own life for the safety of her husband and their theatre to the point she's willing to sleep with a Nazi officer when it might save him may have fallen a bit out of love in the duration, it's never depicted onscreen in either their warm relationship or the chemistry between the two actors. Denueve is wonderful here, and while I am not the type to go around saying somebody deserved an Academy Award because I realize that Awards are pretty much a popularity contest, but she deserved an Academy Award nomination. Depardieu, who was also in Maurice Pialat's Loulou (review here) and Alan Resnais' Mon Once d'Amerique in 1980, possessed a strong screen presence, and even though the script never really develops his character to the fullest extent that we ever understand all of his motivations, his rugged charisma masks those deficiencies and make the mysteriousness of the character seem intentional.

While Truffaut's stylistic choices may have been more milder, his passion for the art is still palpable going into his final five years, and I look forward to catching up with his final two films. I wouldn't steer anyone directly to The Last Metro if they hadn't seen the complete Antoine Doniel series, Jules and Jim, Shoot the Piano Player, Day for Night, or The Bride Wore Black yet, however, for those who have, it's a worthy stab at classical storytelling.
Posted by Colonel Mortimer at 6:00 PM