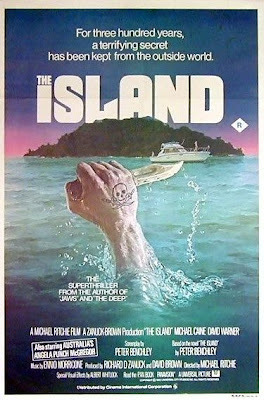 With the producing team of David Brown and Richard Zanuck and author Peter Benchley adapting his own novel with an ocean setting, Universal Studios must have had visions of the worldwide success of Jaws dancing in their head when they scheduled The Island (1980, Michael Ritchie) for release on June 13th, 1980, a week before the fifth anniversary of the premiere of the Steven Spielberg directed classic. However, unlike Jaws which had a clear and primal plot, iconic archetype characters and a director with a strong grasp on the material, The Island is a frequently awkward film that suffers massive tonal issues. It was a notorious box office disappointment and collected a handful of Razzie nominations. While it's not as bad as it perceived reputation suggests, my interest and leniency towards it is mainly as an anthropological curio of the nascent days of the summer blockbuster.

Blair Maynard (Michael Caine), a reporter and deadbeat dad, talks his editor into allowing him to travel to Florida to investigate the disappearance of yachts and boats along the Bermuda triangle. It being the weekend he's stuck with 10 year old son, he brings the kid along under the guise that they are going to DisneyWorld. Alas, they are kidnapped by a batch of modern day, broken English speaking pirates led by David Warner (bad guy du jour of the late 70's/early 80's--he also played the heavy in Time After Time and Time Bandits), who are responsible for the various attacks that Maynard came to investigate. The pirates brainwash the son, turning him into a gun totting member of their brigade and keep Maynard chained up, planning to use him to impregnate the women on the island since centuries of inbreeding has led to an inability to conceive (a plot point partially borrowed by the writers of Lost). Alas, Michael escapes and plans to go medieval on the gang's asses and get his son back. All in all, not one of the father and son's better weekends.

Both the structure, and especially the tone, of The Island is all over the place. The simplistic and pirate centered plot seems aimed at children and the rousing Ennio Morricone score portends a high-falutin' pirate adventure yet they are the villains in this piece; the film features ample nudity and sexual situations as well as excessive violence and a high gore quotient, garnering an R rating which would prohibit viewing of the audience who would probably appreciate the film the most, kids.

While Caine has the bemused smirk evident in most of his paycheck roles (see 50% of his 80's work, including Jaws the Revenge), the rest of the actors play things serious, as does director Ritchie, with one strange exception, when a speedo clad white dude attempts to fend off the armed mercenaries with kung-fu, complete with overdubbed grunts.

Spielberg and Jaws are the perfect combination of director and material. While he's been accused of pandering (an equally apt and disputable claim that is nonetheless irrelevant in the matter of Jaws) he knows when to add humor and/or humanity, when to show the shark, how to amp suspense and most pertinent, how to compose a shot for maximum effectiveness. While the practice of toning down violence and gore in horror films for a PG-13 rating has neutered some films, Spielberg deft decision to fight for a PG rating for Jaws (the PG-13 was not introduced until 1984) led to the film's massive success, as kids home from summer repeatedly saw a movie that made the rebelliously daring claim that it may be "too intense for some kids". Michael Ritchie, though far more experienced a director in 1980 than Spielberg was in 1975, and having had a good deal of success in the 1970's with pictures like The Candidate and The Bad News Bears, has a clear talent for comedy, but no clear stylistic strength, especially in regards to suspense, where he's particularly weak. He shoots the boat attacks too dark and frantically, and lacks a sense of pacing. These scenes, obviously most crucial in a action/suspense movie just unfurl, often times incoherently.

While major studios have gotten better at researching their success probabilities and marketing their high concept films since 1980, the fact remains: is anyone clamoring to rewatch The Island other than silly people with silly goals like me or for nostalgic remembrances? It was considered a major critical and financial fiasco at the time, and was never given a US DVD release, but really, while dumb and uninspiring, it's pretty much on par with about 80% of the films that get released by major studios in the summer months today. Can you imagine for example feeling compelled to watch the 2005 Michael Bay film that share the same title (though it's not a remake) in 2035? Truthfully, I am getting to the point where I'd rather watch an interesting failure than a mediocre success most days of the week, and of course, a great film above both of those options, the problem is, the middle choice is increasingly becoming viewers' only option. A trend that existed long before 1980, no doubt about it, but nonetheless a trend that became more prevalent during that decade.
Posted by Colonel Mortimer at 4:04 PM

I had never heard of this movie, your review has me now somewhat interested in seeing it.

PS- I like the new layout, what is the main picture at the top? I cannot think of what movie it is from!

Thanks, yeah I decided to play around with the layout.

The picture is Nancy Allen in Brian DePalma's Blow Out.