Trailer of the Moment: The Weekend They Didn't Play Golf Edition

After finishing James Dickey's 1970 novel, Deliverance, I gave the Blu-Ray of John Boorman's 1971 film adaptation another viewing. The film, whose screenplay was written by Dickey himself, is extremely faithful to the source material save for one exception, an excised first chapter that takes place the day before the ill-fated canoe trip that provides the back story of all the characters and the history of their relationship to one another. 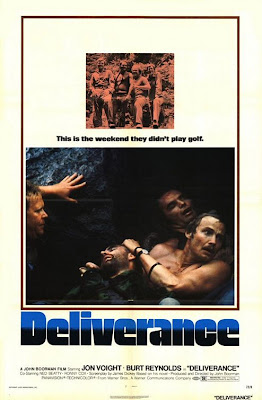 Boorman's (or Dickey's screenplay) decision to discard the opening chapter is actually a wise one as it results in the four men becoming archetypes of modern masculinity (circa the early 1970's) and blank slates to which the viewer can identify with in broad terms, be they the jokester, the overly machismo outdoorsmen, the sensitive type or the everyman, thus making the visceral experience when the shit hits the fan more powerful.

Interestingly, the trailer for the film actually includes a rather faithful presentment of the excluded back story and professions of the four men.

Here's the trailer, and did I mention that you got a pretty mouth?

Posted by Colonel Mortimer at 4:28 PM

I enjoy these older trailers and how they show a lot of the film but really make you want to see it and even though they show a lot they don't ruin the movie. We need more trailers like these around now.