Trailer of the Moment/The Percy Rodrigues Files: Shivers aka They Came from Within (1975, David Cronenberg) 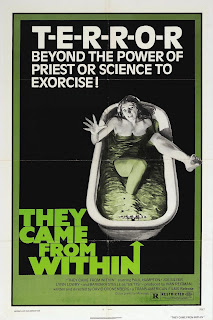 Shivers, released in the United States with the more titillating title They Came From Within, may technically not be David Cronenberg's debut film, however, it is the first to have, to paraphrase the Coen Brothers, "that certain David Cronenberg feel". While his 1986 remake of The Fly is often regarded as an AIDS parable in its depiction of the desecration of the body, had it not predated the first noted case of the disease by a good half decade, Shivers could share a similar reading as it depicts the transference of a parasite through sexual interaction.

Due to it's low budget (the film was financed in part from a Canadian tax incentive) the film is a little rough around the edges, but Cronenberg's commanding skills of special effects incorporation and creating tension and unease along with the driving thematic element of "body horror" that would drive a number of his most celebrated works including The Fly, Dead Ringers, Crash and Videodrome, are all already on display. Future Ghostbusters director and fellow Canuck Ivan Reitman produces and Black Sunday's Barbara Steele co-stars.

The US trailer features a familiar narrator, Mr. Percy Rodrigues, who makes yet another one of his patented bold proclamations, this time it's: "If this picture doesn't make you scream and squirm, you better see a psychiatrist!"

Posted by Colonel Mortimer at 4:42 PM