Following in the footsteps of Quentin Tarantino, Edgar Wright, Joe Dante, Diablo Cody, Eli Roth and Seth Green, actor and awesome stand-up comic Patton Oswalt (the voice of the culinary inclined rat Remy in Ratoutille) will curate the programming at my favorite theatre, The New Beverly Cinema for two weeks. Sadly, I will be in Arizona and New Mexico on my one-year marriage anniversary trip and will miss it completely. Doubly disappointing as Oswalt's picks are second only to Tarantino's and Dante's selections, as far as eclecticism and personal interest goes (no disparage meant to others).

Here's the flyer as well as some notes about the picks from Mr. Oswalt himself, and of course if you are in Los Angeles between October 3rd and 16th, I implore you to check it out! The Mattheau, the Noir and the concluding horror double bills being of most intrigue. 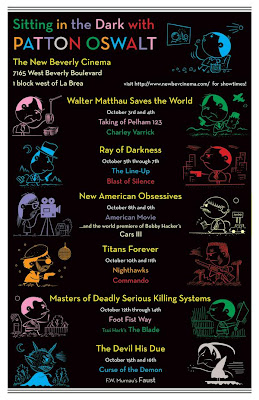 The Taking of Pelham 123 and Charley Varrick

Was there ever a more unlikely – or more perfect – “action hero” than Walter Matthau? This double feature showcases Matthau pitting his slouch, jowls and world-weariness against two of the iciest villains in screen history. In Pelham, Matthau is the rumpled, cranky Lt. Garber, facing down subway hijacker Robert Shaw and his color-coded band of machine gun-wielding criminals. A gritty, chaotic love letter to an early 70’s New York in decay, complete with an ineffective mayor, whining hostages, and a sardonic Jerry Stiller. Gesundheit. Charley Varrick is Don Siegel’s follow-up to Dirty Harry, with Matthau roaming the badlands of New Mexico. This time he’s on the other side of the law, as bank robber Varrick, who unwittingly rips off nearly a million dollars of mob money. The cops and mob are soon in pursuit – including an oily John Vernon, Norman Fell in a bulletproof vest and, worst of all, Joe Don Baker as Mr. Molly, described by screenwriter Barry Gifford as a “…flesh and blood Terminator…every day he’s around is Friday the 13th.” Whores are insulted, the hills are filled with explosions, and a pipe cleaning knife is…misused. Plus, John Vernon muses about pliers and blowtorches. Can Matthau prevail?

The Lineup and Blast of Silence

15 years before Charley Varrick, Don Siegel directed this lean, brutal crime flick with Eli Wallach as a desperate bag man trying to talk his way out of an execution. There’s unfinished highways, a steam room snuff, and a frightening meeting with “The Man” in a roller rink. A favorite of James Ellroy’s – and the inspiration for a Bob Dylan song. How can you allow yourself to miss it? Blast of Silence is a no-budget, black-and-white rough draft for Taxi Driver, and – until its recent prestige release by Criterion – the Holy Grail of noir enthusiasts. Writer/director/star Allen Baron is “Baby Boy” Frankie Bono, an Ohio hitman visiting Manhattan at Christmastime to work his work – and wrestle with his past. “You’re cold now.”

Chris Smith brought America the purest portrait of hope in the face of oblivion with his documentary American Movie. Recounting the massive failures and small victories of Wisconsin filmmaker Mark Borchardt, I must have seen this in the theaters five times. “I’m thirty years old, and I’m about to clean up someone else’s shit.” This is Ed Wood in a world of strip malls, child support and credit card debts. Also…it’s weirdly inspiring. Cars III is having its world premiere at The New Beverly on Wednesday, October 8th. Portland-based no-budget filmmaker Bobby Hacker’s been steadily building a love/hate cult following on YouTube. This is his first feature – a cautionary tale of a used car salesman who rolls the dice with damnation to sell one more car. Here, check out the short film (which Bobby made to test his homemade green screen) that inspired the feature: *Joe: Here’s where you insert the following YouTube video: http://www.youtube.com/watch?v=LaAZKtoAFgc (Note: Bobby Hacker will be in attendance for the Wednesday night premiere. *Special thanks to Bobby for letting me premiere his film)

All y’all haters need to avert your gaze and bow down at the altar of 80’s manliness that was the Austrian/Italian alliance of Stallone/Schwarzenegger. Here’s my detailed synopsis of each movie: (Explosion sound and then guitar riff from anything by Judas Priest). See you there!

The Foot Fist Way and Tsui Hark’s The Blade

The Foot Fist Way was the criminally under-appreciated best comedy to be released this year, and the funniest film I’ve seen in a long time. Danny McBride is Fred Simmons, a short-sighted tae kwon do instructor in a North Carolina mini-mall. The self-proclaimed “Master of the Demo”, his life begins to fall apart, no matter how many boards he breaks or bricks he shatters. “Your weakness is disgusting to me.” Tsui Hark’s The Blade features revenge, love, violence and redemption cranked up to feverish levels. Man Cheuk Ciu is the sardonic, one-armed chain-sword outcast, seeking revenge for the death of his father. Xin Xin Xiong is the scary, tattoed Fei Lung, a shrieking, wild-eyed psycho-killer. The fight sequences give new meaning to the term “ground shaking”. Don’t be a pussy, show up. (*Special thanks to Quentin Tarantino for loaning me his print of The Blade)

Curse of the Demon and F.W. Murnau’s Faust

My festival ends as the days grow darker and Halloween approaches with two of my favorite, moodiest horror flicks. First up is Jacques Tourneur’s much-debated Curse of the Demon. This is the movie that cinephiles always point to in the ongoing “show or don’t show” argument about movie monsters. Which way is scarier? Whatever side you fall on, Curse of the Demon has plenty of weird, eerie atmosphere, as nearly every scene crawls with menace just out of the frame. Dana Andrews is the skeptical American with a case of -- as the theme for The Rocky Horror Picture Show declared -- the “runes”. F.W. Murnau (Nosferatu) directed this dark-yet-epic adaptation of Goethe’s immortal novel right before he made Sunrise. But whereas Sunrise was an intimate, touching portrait of love’s struggle in the modern world, Faust is evil and temptation writ large. God and the Devil wager the fate of the world on one disillusioned German doctor, with Emil Jannings having a ball as Mephisto, the Devil’s agent of corruption. No matter how much CGI or Steadi-Cam footage you’ve seen, the shot of Satan enveloping the world in his cape is guaranteed to give you the heebie-jeebies.

Posted by Colonel Mortimer at 3:45 PM