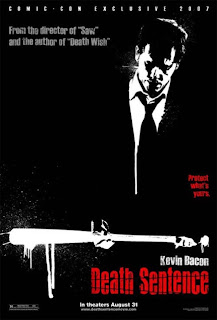 In my review of the first Death Wish I mentioned that Brian Garfield, the author of the book that inspired the 1973 film, was so upset about its pro-vigilantist interpretation of the source material that he wrote a follow-up in response, Death Sentence. Upon remarking that Saw and Dead Silence director James Wan helmed an adaptation of that novel, I made a dismissive statement of his skill at depicting a subtle ambiguous treaty on the act of vengeance. Well, I was right, there's nothing subtle or ambiguous in Wan's film, but that does not necessarily mean it is without worth.

Both aesthetically and thematically, Saw is anathema to my cinematic predilections. It struck me as the work of an ADD sufferer with a need to prove their "extreme" bonafides, the work of someone who had the plot and moral quandaries of Seven explained to him but never got around to actually watching David Fincher's film past the opening credits montage. Thankfully, much of Wan's stylistic flourishes are toned down in his third film. No strobing editing display, no speeding up the film during the "boring" scenes (although Wan does prove incompetant at expressing seriousness, represented here repeatedly with slow-motion and a bland Coldplay wannabe with a female vocalist ballad on the soundtrack), and I only remembered one time where the film spins around a character's head, and even those were slower paced spins. There's even a nice, dare I say unique, touch here and there, most notably in the action sequences which emphasizes a sloppiness in fighting by Kevin Bacon's vigilante seeking suburban dad which is appreciated since usually these films start with the character transforming instantly from a strict pacifist to an awesomely adept ass kicker.


The action sequences are the highlight of the film, but as I envisioned, and similar to Death Wish director Michael Winner, Wan is woeful at expressing the basic tenant of Garfield's argument, simply put: "an eye for an eye will make us all blind". It appears he is attempting to present an even keeled dichotomy between Bacon and the leader of the gang that is responsible for the death of his son, killed in a hazing ritual. The multicultured gang that lives in dilapidated warehouses is one of those "only exists in movies" types. Had Wan displayed a more realistic poor financial upbringing that pretty much every person who joins gangs originates from or perhaps if the instigating murder was accidental rather than ritualistic, then he could have created a more balanced contrast between the two men. After the first act, Wan does cut between Bacon and the gang leader (Garrett Hedlund) whose brother killed Bacon's son and who subsequently is killed by Bacon after he lies in a disposition and sees the killer go off scott free. Unfortunately, save for Hedlund's relationship to John Goodman's character, his ineffectual father, who has no interest in going to one son's funeral and sells Bacon the guns that he will use to kill his other son-in fairness he does tell Bacon that he will not give him his son's address, so he's not all that bad (side note: a fun game to play while watching the film is to imagine that Goodman's character is actually Walter Sobchak from The Big Lebowski 17 years later)-Wan and screenwriter Ian Jeffers never shade the two characters as anything other than diametrically representing good or evil.

Much like Garfield was upset at Michael Winner and Bronson for misinterpreting his novel to create a pro-vigilante and subsequently anti-poverty message, I imagine he would be less than enthusiastic that Wan never truly dwells on the ultimate irony of the situation, that had Bacon's character accepted a jail sentence for the gang member who killed his son, no matter how small it may seem to him (he was the only eyewitness), instead of letting him go to enact street justice, the situation would never of escalated and (spoiler) it would not have cost him more loved ones and ultimately his own life.

As far as replacing Bronson as a modern vigilante goes, Bacon is ultimately too self aware of an actor to ever wear his (blood stained) shoes.
Posted by Colonel Mortimer at 11:46 AM