YouTube Find of the Week: There's Gremlins in your DVD! 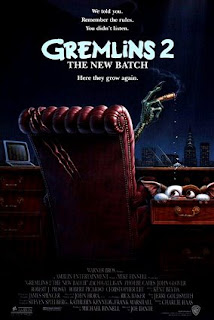 Gremlins, which combined director Joe Dante’s love of 1950’s monster movies with a subversive take on the small-town kid comes in contact with an otherworldly creature plot mechanics of Steven Spielberg’s E.T. (Spielberg probably wasn’t too bothered, he was an executive producer of the film) became along with Ghostbusters, Indiana Jones and the Temple of Doom and Karate Kid, one of the big financial successes of the 1984 summer movie season aka the best summer ever to be an eight year old filmgoer. Naturally, Warner Brothers was desperate for a sequel. So desperate in fact that it eventually gave Dante free reign to create whatever he fancied just to continue the franchise.

The resulting film, Gremlins 2: The New Batch was an anarchistic, satirically comedic riff on the first film focusing more on the increasingly Looney Tunes inspired antics of the ever evolving Gremlins over both the human characters and the loveable (and more marketable) Mogwai, Gizmo. The studio was, of course, stunned. They enacted revenge upon the director by giving the sequel a kamikaze release date in the summer of 1990 opposite that year’s big tentpole release, Dick Tracy, sacrificing its earning potential to insure that the Warren Beatty project failed to have an opening weekend exceeding that of the Warner Brothers’ produced blockbuster of 1989, Batman. 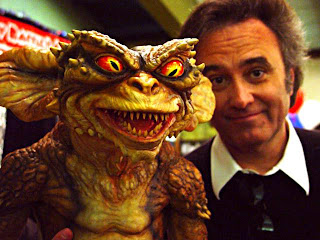 For the few that actually saw and enjoyed The New Batch theatrically (I proudly count myself in that camp) one of the highlights was when the film “burns out” mid-scene. The film appears to bubble and burn and after a few moments of a blank white screen (apparently this prompted enough people to leave the theatre in complaint that many exhibitors gave viewers advanced warning), silhouetted Gremlins take command of the film creating hand puppets and various other havoc until urged to return the movie back to it’s normal state by none other than Hulk Hogan! For home video viewers, Dante recreated the scene with VHS fuzz and a warning from a dubbed John Wayne. On the DVD release, the theatrical version is featured with the VHS version included as a special feature.

Some clever person on YouTube has updated the gag, but for the DVD age. The maker of the video, Sacha Feiner, displays a creativity that Dante himself could appreciate, inserting Gremlins into movies including Batman, The Exorcist and Raiders of the Lost Ark. The video does go on a little too long (I haven’t performed an exact comparison, but it feels twice as long as the official gags) and it’s restricted by not having the actual puppets thus forcing the filmmaker to mash up footage from the two films. But the right spirit is there.

A week ago I commented that I have become hardened by the remake-mania proliferating Hollywood to the point of indifference. But I have to admit when the inevitable Gremlins remake using all CGI creatures and told straight-faced comes out, I will feel mighty depressed.
Posted by Colonel Mortimer at 11:47 AM

that was pretty cool. looked well done for just something found on youtube. i also enjoyed gremlins 2 quite a lot and think its an underrated sequel.

Have a look at the making of that fan sequence!
You'll see puppets were re-created for the project.
http://www.youtube.com/watch?v=mDvBVFv-7LM