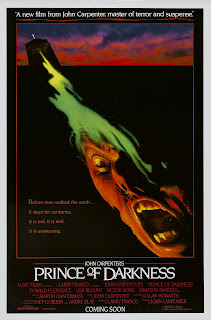 For some reason Prince of Darkness had eluded a viewing on my behalf until the New Beverly screened a print recently, now I can mark it off my list of unseen John Carpenter films, on which only the TV movie Elvis and Starman remain. While not a great movie and straddled with an either needlessly complicated or nonsensical plot depending on your point of view, the film flows and ultimately works because of Carpenter's solid directing skills and rhythmic pacing.

The screenplay, written by Carpenter himself, under the pseudonym Martin Quatermass (an homage to The British Quatermass series of television shows and films) concerns a cylinder featuring green liquid that is kept under lock and key in an abandoned church in Downtown Los Angeles, the priest in charge of caretaking the abandoned church dies, leaving Father Loomis (Donald Pleasance with a familiar character name) in charge of this cylinder which is giving cryptic messages via dreams. He contacts a professor who brings a group of researchers. To cut a long story short, they revive ye old Anti-Christ himself who possesses bodies and kills off members of the group, all of whom happen to be trapped inside the church because they are surrounded by a bevy of possessed homeless people led by a pale Alice Cooper.

While it never fully congeals into a complete story and feels more like bits and pieces of cool imagery--maggots, cockroaches and ballooning body parts, et cetera, it moves at such a pace that you don't really notice or frankly care. Carpenter shoots the film in his typical precisely composed manner and edits scenes rhythmically to the minimalist repetitive synthesizer score which he performs with frequent collaborator Alan Howarth. Each scene is a case study in economical storytelling, revealing only the necessary information and moving on, allowing viewers to add it all together. This sparse "just the facts" manner of information disbursements informs pretty much all his work and gives a sense or urgency and mystery (and a thankful limit on meandering exposition) that has gone missing in modern horror, with the exception of a few rare occurrences such as The Strangers and The Descent. For a case study of why this methods succeeds, one needs only compare his Halloween to Rob Zombie's overly detailed remake to see which approach is more effective.

Carpenter throws in some nice visual moments like when he pans back from the aged and foreboding church to reveal its surroundings of a modern urban downtown with skyscrapers, and a curious shot where Pleasance's character is talking about not trusting in one's faith in which he is framed in such a way that we assume the shot will reveal the priest is talking to himself or his reflection in a mirror, but just at the last beats of the scene, it is revealed the professor character is actually on the other end. 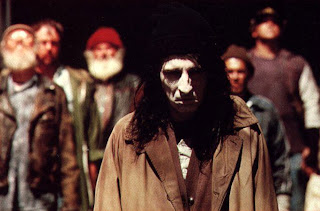 Pleasance is solid as Loomis, who shares more than just a name in common with his character in Halloween, they also are the only persons who are aware of the severity of the potential evil involved. Victor Wong and Dennis Dun, who both worked with Carpenter on Big Trouble in Little China the prior year are even more impressive as the professor in charge and one of his smart aleck students. Dun who in another filmmaker's hands would be relegated to either comic relief or an Asian stereotype, is actually really funny in an organic-keeping in character way, and the depth imbued in both his acting and the screenplay is revealed during an extended sequence when he is trapped in a closet (insert your own R. Kelly joke here). The film's biggest weakness are the two ostensible leads, co-students played by Jameson Parker, who resembles a weird cross between Tom Atkins and Craig Wasson and who was co-lead on the hit television show Simon and Simon at the time and his love interest played by Lisa Blount. Their characters' relationship is supposed to be the humanity and heart at the center of the story, however, due to a combination of Carpenter's previously discussed economical storytelling and Parker and Blount's not so compelling screen presence (and the really bad 80's outfits they are costumed with), a major sacrifice on the part of one character has little of its intended impact.

Maybe the fact that Carpenter hasn't had a theatrical release since 2001's underwhelming Ghosts of Mars in addition to the indifferent hackwork he displayed in his last two projects, both Showtime Master of Horror episodes: Cigarette Burns and Pro-Life, both of which further illustrates Carpenter medium is film (even his prior made-for-TV movies were shot like a movie) furthered my appreciation for Carpenter's fundamental grasp of cinematic tools on display here. Prince of Darkness is definitely second-tier Carpenter and call me an auterist if you must but I'd rather watch these second-tier works of his than anything in the darkly shot, over-explained, quickly edited and CW ready actor starring Platinum Dunes crap that passes as horror these days.
Posted by Colonel Mortimer at 12:00 PM