This Month in Horror: On Line

I've given you theatrical recommendations, I've given you television recommendations, what else do you want? Oh I get it. You're a hip now sort of guy or gal, you twitter and update your Facebook status at each bowel movement. So you gave away your television and can't stand to be away from instant messaging long enough to go to a theatre, huh? Well, you are in luck, some websites have streaming full length films, and some of those films just happen to be of the horror variety.

Personally, I've only ever tried out Netflix's Watch it Now and Hulu, both are pretty reliable, though not without their flaws. Netflix tends to pause to buffer from time to time and Hulu has frequent commercial interruption, but both show films uncut, which is more than you can say for basic cable. Here are ten recommendations for each site. 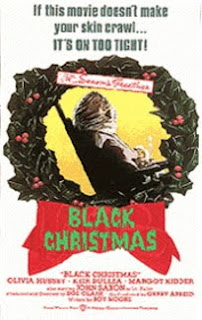 Black Christmas (1974, Bob Clark): I've written about this film before, it's one of my all-time favorite horror movies, and was the template for many of the holiday themed slasher films that followed, though with better developed character, deeper resonance and better atmosphere than most of its followers.

Carrie (1976, Brian DePalma): Just watched this again for the first time in years, and wow, what a film, up there with The Shining for the best Stephen King film adaptation. Simultaneously a wicked black comedic satire, revenge fantasy and honest depiction of the cruelty of high school and sexual discovery.

Combat Shock (1986, Buddy Giovinazzo): If like me you missed The Cinefamily presentation, you can still catch this notorious grimy cult favorite on line.

The Evil Dead (1981, Sam Raimi): The ultra low budget film that started Sam Raimi's career and the Ash trilogy is still a blast of gory fun. 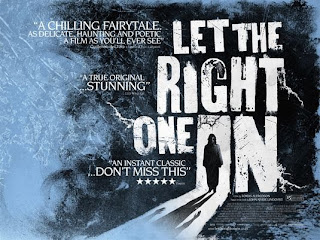 Let the Right One In (2008, Tomas Alfredson): The only vampire film to stand out amongst the barrage of recent bloodsucking deluge is this soulful poetic Swedish film, see it before the American remake. Lina Leandersson deserved recognition for giving the best performance of last year.

Patrick (1978, Richard Franklin): This Australian shocker from Alfred Hitchcock protege Franklin was featured prominently in the Ozsploitation documentary Not Quite Hollywood.

Twilight Zone: The Movie (1983, John Landis, Stephen Spielberg, Joe Dante and George Miller): After the introductory segment with Dan Aykroyd and Albert Brooks feel free to skip past the infamous Landis section and the maudlin and bored Spielberg section to Dante's technicolor nightmare of a world where a nine year old boy gets everything he wants which is followed by Miller's remake of the infamous "Nightmare at 20,000 Feet" episode, with John Lithgow in William Shatner's role of a paranoid flier.

Zombie (1980, Lucio Fulci): I will be honest, I am not the biggest fan of Fulci's gory ostensible, sequel to George A. Romero's Dawn of the Dead, but if you've never seen the shark versus the zombie scene, get thee there now! 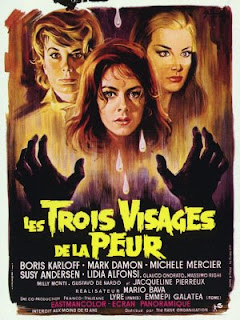 Two by Italian maestro Bava, the first an atmospheric black and white tale of witchcraft, the second a brightly colorful triptych of horror tales hosted by Boris Karloff.

Two remakes that prove reduxes don't all have to resucks (heh!). The Blob improves the original's cheap special effects. And while Snyder's take on Romero's classic is nowhere near an improvement, it's an interesting modern revision with solid acting and a good sense of dread. All political subtext though is removed and I despise the final five minutes.

Dick Miller gives a tour de force as the nervous waiter and wannabe beatnik who turns into an overnight sensation in the art world after he plasters a dead cat. A wicked satire. 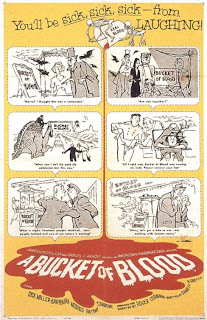 I do like Hitchcock as a matter of fact, and generally, Argento too, although his recent work is a little dicey, but this got pretty good word of mouth.

The missing link is loose on a passenger train and only Christopher Lee and Peter Cushing can stop it. Joe Dante played this at his first New Beverly programming residency.

Before Charlton Heston or Will Smith tried to survive a vampire apocalypse, Vincent Price starred in the first film adaptation of Richard Matheson's I Am Legend.

And finally if you are feeling really brave, you can watch what is affectionately considered to be (even by it's cast and crew) the worst movie of all time.

If anyone has any legal online viewing sites they recommend, please pass them along in the comment section.
Posted by Colonel Mortimer at 12:00 PM

Why no H3:SOTW? You know its a classic that was all bashed because it was different, hell even I said that before I watched it a few times.

I liked Let the Right One In, but I think its a tad hyped up.

I have still never seen Phantasam

Is Halloween III available for instant viewing on netflix or Hulu? I didn't see it when I prepared this list. I would of course add it if I did. It's a seasonal favorite.