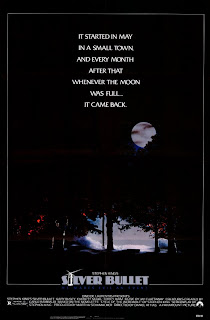 Originally conceived as a collaboration on a calendar between writer Stephen King and artist Bernie Wrightson, Cycle of the Werewolf ballooned to a novella when, in a not so surprising twist, the typically verbose King got elephantitis of the prose kind. Split into twelve chapters, one for each month of the year, the conceit was easy and genius, a year long werewolf attack in the small (fictional) town of Tarker's Mill, each chapter devoted to one day of the annual lunar calendar.

Reading Cycle, I was surprised anyone would see film potential, well other than the popular and timeless werewolf genre and King's name, in the project. There are only a handful of recurring characters most of who aren't introduced until the April chapter and it's only 130 pages long, with about forty percent of that count being comprised of illustrations. But hey, it was the mid-80's, where anything King wrote had it's film rights instantly sold, or have you forgotten Don't Forget the Milk: The Grocery List...of Death!? And the adaptation's producer Dino DeLaurentiis was never one to allow quality to get in the way of his products. The film that would eventually result does not rely on the novella's episodic nature and focuses early and often on the family that becomes the focus in the last few chapters of the novella with a few of the "kills" from the source material incorporated.

Silver Bullet (the film was renamed to focus on a combination of Corey Haim's character's wheelchair, the sole method of disposing of the lycanthrope afflicted and possibly a Coors light cross promotion) director Daniel Attias does not put the personal stamp on King's material that your, say, Brian DePalmas, Stanley Kubricks, John Carpenters, or David Cronenbergs had earlier, which would be okay, I guess, if the material was more interesting. However, what's more, he's painfully inept at creating any sense of atmosphere or suspense save for the final climactic scene which is surprisingly tense and the most well executed portion of the entire film. His weakness is most apparent in a major plot point in Act II that drives the rest of the movie: the werewolf's fist attack on Corey Haim's character Marty Coslaw. Attias depends heavily on cliché slasher film tropes such as the "killer watching in the distance" and subjective POV shots. Most criminally, he never actually places Marty and the werewolf ever in the same frame at any point of the entire scene, robbing the film of a crucial threat. Maybe this was due to child labor laws keeping the underage Haim from participating in night shoots, but c'mon, ever hear of shooting day for night or on a set where you can manipulate lighting? Attias' other crutch is to pay tribute to the other dominant Steve of 1980's popular entertainment, Spielberg, by creating scenes that in many cases beat for beat recall the noted director's past work, including Tarker Mill's town hall meeting turning into an angry mob scene a la Jaws (the film's also has a pivotal Fourth of July event cancelled) and a murder set piece that borrows heavily it's visual palette from Elliott's discovery of E.T.

Attias may lack much panache, but he's assisted in mediocrity by the screenplay, adapted by King himself (his first feature length screenplay) who adds such dubious new details like making the film a period piece set in 1976, though other than an inter-title, no reference to the year is ever made, not even when the fireworks show on Independence Day is cancelled on what would be the country's bicentennial, and most egregiously, a voice-over that had me twitching to buy that Robert McKee book just so I can throw it at the screen. Serving no purpose other than a beta test for the nostalgic VO that would be utilized in later King adaptation, such as the year later production Stand by Me, the voice-over is tonally presented in the exact patois of someone wistfully recalling their first kiss "I can still remember the first time I was attacked by a werewolf, the lilies were in full blossom etc." 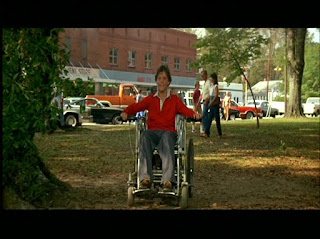 King also restructures the narrative utilized in the novella, obliterating the monthly lunar cycle framing (which he already admits to fudging for dramatic purposes in the novella's preface) and ups the number of kills despite the film's span being reduced to between summer and Halloween. King presents the film as a mystery, thus removing the sympathizing with the afflicted werewolf aspect, a layer not forgotten in the source material, especially unfortunate given the profession of the afflicted person (I won't spoil in case you have interest in this 22 year old film) and the serious moral struggles which he or she should have, all of which is sidestepped to focus on the Coslaw kids and their relationship with their man-child uncle (played by Gary Busey at his most Gary Buseyiest).

Speaking of the kid centric focus of the film both plot wise and cinematically, Silver Bullet was rated R but seems aimed at a much younger demographic. A lot of time is spent on typical childish behavior that's rote to anyone over voting age or the wow factor of Haim's supped up wheelchair, yet some of the murder scenes have over the top gore and decapitations. The film teeters on the edge of being too intense for most children but a bore for the horror crowd. Ironically, Paramount had more success later in the same year, 1985, with the PG-13 rated werewolf comedy Teen Wolf.

When all is said and done what the failure of Silver Bullet reveals most is that King became a victim of his own success. He was notably, and still to this day is, upset at changes that Kubrick made to The Shining novel, not realizing that adaptation does not always equal a page for page reproduction. By the point King became the biggest selling author in the world, he had more power over his production and the result was films churned out by less visionary directors than those between the years of 1976-83, including humorously enough, King himself. Of course those very film adaptations by interesting directors are just as responsible for King's success as his writings.
Posted by Colonel Mortimer at 12:00 PM