Trailer of the Moment: Alfred Hitchcock Gives Us a Tour of the Bates Motel 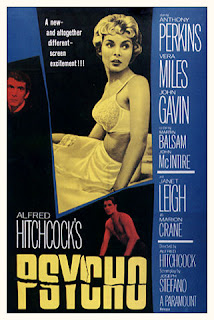 Possibly the most famous trailer in cinematic history, the trailer for Psycho breaks all conventions. It's over six minutes long, compared to the 2-3 minutes standard length. It's hosted by the director himself, something I cannot imagine anyone other than Hitchcock at the height of his TV success as host of Alfred Hitchcock Presents could ever get away with; even today's most recognizable directors like Steven Spielberg or Quentin Tarantino probably will never be tasked with being the sole marketing image of their own studio made films. And it manages to have no actual footage from the film (that's Vera Miles not Janet Leigh at the end) but is completely full of spoilers as Hitchcock in his usual droll gallows humor nature cheekily describes or hints at every sinister plot point.

And in case you're wondering about the end, where we're told that "no one will be admitted after the film starts", cinema goers generally came into pictures whenever they felt like it and would stay until they caught the rest of the film at the next showtime, then leave at the time. Psycho is often credited with changing the culture of how people watched films.

Now let's join the fabulous Mr. Hitchcock as he escorts us on a tour of the set of his new film, Psycho!

Labels: psycho, the horror, trailer of the week

I had seen this before, but it is still a very cool behind the scenes look at the sets. I really enjoy stuff like this.