The Good, The Bad and The Ugly of Rob Zombie's Halloween II 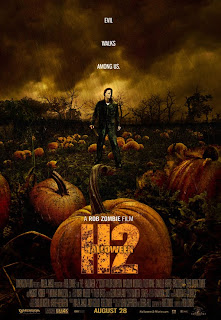 Call me extremely forgiving. Call me a masochist. I had disliked each of Rob Zombie's three films released prior to Halloween II, and what's more I was actually seeing diminishing returns from his debut to the horrendous misguided remake of John Carpenter's original 1978 classic Halloween (yes that means House of 1000 Corpses is still my "favorite" film of his). What's more, even though I was one of the few that found The Devil's Rejects lacking, I was actually looking forward to someone with a specific aesthetic and apparent respect for the past like himself dealt with the task of remaking a masterpiece versus some anonymous video director that Platinum Dunes got on the cheap. Figuring that if it has to be remade, you know, at least it's by someone distinctive.

Of course, the result was a maddening disaster. Zombie stripped any mystery from the Michael Myers story, amped up the hillbilly dialects from Rejects to a self satirical level, condensed the entire ninety minute running time of Carpenter's film into about a third of the time in the second half of the film (yet Zombie's movie was still nearly twenty minutes longer) and shot a film that was incomprehensibly dark, and well, looked like a film from some anonymous video director that Platinum Dunes got on the cheap. All the while he maintained the guise of someone who never cared for the sequels, yet made Laurie the sister of Myers, something that is never mentioned until the original Halloween II (1981, Rick Rosenthal), a plot point that Carpenter added in the wake of Empire Strikes Back revealing Luke Skywalker to be the son of Darth Vader, and one that destroys what I like best of the original, a lack of psychoanalytical reasoning for Myers motivation, something that will always be eerier to me than any weak "oh that's why he does that" explanations.

So why did I make sure to see his follow-up upon theatrical release (in the very Halloweeny month of August--sheesh, Weinstein Company no wonder your nearly bankrupt)? Honestly, I don't know. I am a horror fan and often times that means being a gluten for punishment.

Halloween II is even more of a Zombie film, full of his fetishes and barring his unmistakable fingerprints. Yet, I found it interesting, albeit it in a train wreck sort of way.

So let me provide you with some bullet points of the three levels of madness that is Rob Zombie's Halloween II. A name of a good psychiatrist is welcomed in the comments.

*An actual honest to goodness suspenseful sequence. Something completely lacking in the first remake. Laurie trapped in the hospital, hopped up on drugs and barely able to walk wakens to find all the nurses and doctors murdered and Myers after her. For once Zombie forgoes his normal punishing brutality in favor of placing us in Laurie's predicament, knowing as much or little as her (of course he ruins the whole thing by inexplicably making this a dream sequence)

*Brad Dourif, one of my favorite actors, gives a strong performance and provides the film some rare heart.

*For all the bad that I associate with Zombie's self created world, I do kind of wish that we lived in a place where a black and white live performance of "Nights in White Satin" by The Moody Blues and bizarre old scary cartoons were on television regularly.

*Hard to fault someone for giving quality genre character actors like Dourif, Malcolm McDowell, Dayton Callie, Margot Kidder, Danielle Harris, Mark Boone and Howard Hessman a paycheck. And to his credit, the cameos are a lot less disruptive than in H1, with it's "Hey everybody it's Ken Foree!!" elbow jabs to the audience.

*The dialogue is just as inane as ever. Hope you like ersatz hillbilly talk and the word "fuck" and a complete lack of nuance between characters. And if you thought Tarantino's dialogue for the women in Death Proof rang false, wait until you meet the teenage girls of H2 who function as a in-film DVD commentary of Zombie's personal taste. The worst exchange, that sadly Dourif is saddled with, is this choice line: "Who's the original Marvin, you know from the phrase Starving like Marvin?" (I'm paraphrasing here)

*Ruining the first and best minutes of the entire film by making it an inexplicable dream sequence (have I used the word "inexplicable" a lot here? I guess its an appropriate adjective for the oeuvre of Mr. Zombie). I wonder if Zombie intended to kill her off but was told by the Weinsteins they needed to keep her around for a semblance of continuity or familiarity and so he decided, what the fuck, I won't change the opening, just make it a dream sequence.

*A year after being brutally attacked by a slasher who murdered her friends, Laurie's hanging up posters of Charles Manson above her bed? Whaaaa?

*I didn't mind the not at all scarred despite having his eyes popped out Dr. Loomis becominh a self sanctimonious blowhard cashing in on his relationship with Myers for fame, but his character arc which finds him making a major, life threatening decision, felt forced.

*The film is even more visually and narratively incoherent than anything Zombie has done before, featuring fast cut sequence that reek of amateur community college arty music videos. The film is too dark and the pace too frenetic.

*The opening where we cut from a life saving surgery for Laurie from injuries accrued in the first film to Michael Myers inevitable waking up is just brutal, which granted was the director's intention, but the close up medical procedures crosscut with the rampage of Myers is audience punishing.

*The white horses. Yes, even though she dies in the first half of part one, Sherri Moon Zombie remains gainfully employed by her husband appearing as a spectre and a picture into the mind of Myers (bleh) accompanied by a white horse which were told in an opening preface is symbolic of something or other. What it's most likely symbolic of is a psychology book Zombie had lying around the house and happened to pick up during the writing process.

Well there you go, I will probably not like it, but will also most suredly seek out his next project, yet another remake, this time of The Blob. Can't wait to see the psychoanalytical manifestations of a rampant Jello's mind.
Posted by Colonel Mortimer at 12:00 PM