The Way Things Ought To Be # 2

Before people decided on their evening's film watching at an automated kiosk whilst picking up nachos and beef jerky and before the modern city planners decided to modify their downtowns to resemble outdoor malls, people actually stood in line at one of a bevy of theatres playing double bills in their downtown area.

If there's anywhere in the world where such a phenomena still exists, please let me know, I'm moving there. Until then, I'll keep holding out hope for the invention of time travel. 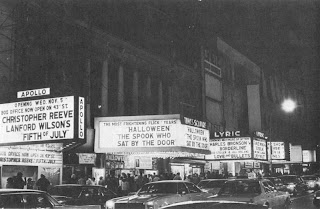 Photo courtesy of Temple of Schlock.
Posted by Colonel Mortimer at 12:00 PM