When I planned to devote a week of Horror Month to Stephen King, the first author whose work I rabidly followed, back in my early teen years, it occurred to me that I should finally visit some of my King adapted cinematic blind spots. While 2001's Hearts in Atlantis and 1996's Thinner remain unwatched, I finally visited Firestarter and Dreamcatcher, unfortunately (or for the readers, fortunately perhaps) I don't have much to say about either, so I will combine some quick thoughts of both into this one post. 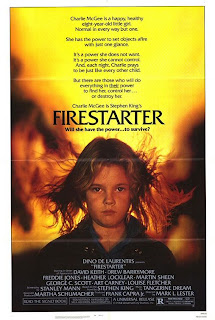 Like the recently discussed Silver Bullet (and from the same producer, Dino DeLaurentiis) Firestarter goes with an anonymous director who provides the feature with the visual flatness of a made-for-TV movie of the era. I want to emphasize I have a special place in my heart for some workmanlike directors and don't require that every director be a formalist of the Kubrick, DePalma or Tarantino caliber, but film is a visual medium and both this and Bullet are inert in that respect, which is something I cannot abide. Having never read the novel that inspired the film, I cannot speak on the major structure or plotting flaws being the film's sole faults or that of the source, but after Act I featuring David Keith and Drew Barrymore running from a shadowy government entity concludes with them being taken captive and separated, the lion's share of the film has the duo apart despite the mental pyrokinetec powers of both seemingly make reconcilication an easy task. The film, like Silver Bullet, does feature a great "final conflict" scene towards the conclusion when Drew finally lets her firestarting skills go nuts. Although much of the power and ambiguity is subsequently whitewashed away in the final scenes that provide a pat happy ending for the little girl. While only his eighth novel, it seems King was already recycling elements from previous works, most notably the lead characters and her similarities to Carrie White's otherworldly power, though lacking the parallels to sexual identity or much of any subtext. 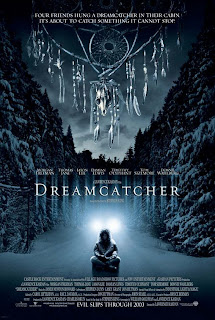 I have never been the type of person to make hyperbolic statements like many of the trolls who lurk on IMDB. I realize very few movies are THE GREATEST MOVIE EVER and just because a film doesn't work doesn't make it THE BIGGEST PIECE OF SHIT EVER MADE. So when I say Dreamcatcher is one of the worst films I have ever seen, please take it as a sincere statement. Concerning another recycled King trope of reunited friends that face a monster related to their past (a la IT), Dreamcatcher's main villian is a piece of shit gone bad. Seriously. I will be completely forthright and say I had trouble staying awake during the film and after awhile gave up the act of rewinding to see what I miss, but what I did see was a film that is just never gels and meanders from frame one, Kasdan and co-screenwriter, the Academy Award winning William Goldman, never grasped how to handle the material, nothing works or resembles anything like a real world or emotion. The film again shows the folly of paying reverence to King's written word, with key scenes that visually depict a character's mind as an actual locker of memories. Again I have to admit to not reading Dreamcatcher, but I have read a lot of King stories so I am willing to bet high stakes this was a component of it. On film, it's flat, and while that would be forgivable if it was a throwaway scene, Kasdan keeps returning to it and it plays a pivotal role in the film's conclusion. Kubrick realized this with the topiary garden gone nuts in The Shining and appropriately altered the film's conclusion. Kasdan is too middle of the road to make the film, long playing fart scenes and feces monster and all, bad enough to actually be entertaining nor is he talented or unique enough to combine whatever threads made Dreamcatcher a best seller with an idiosyncratic or personal vision. The result is a crashing, and punishing 2 hour plus bore.

In conclusion, based on these two films and The Mangler and The Lawnmower Man (which King took his name off of), I'd recommend staying far away from Stephen King adaptations with titles featuring words ending in "-er", I haven't seen either The Tommyknockers or The Langoliers, so perhaps television provides better results for these grammatically similar films. Again, haven't seen Thinner, but based on it's reputation, I doubt that will swing the pendulum.
Posted by Colonel Mortimer at 12:00 PM

Yes Dreamcatcher is a terrible piece of shit, thank you for letting everyone know. I havent seen Firestarter yet