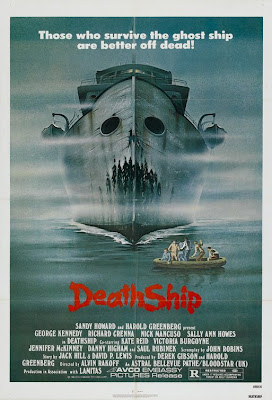 A cruise liner mysteriously collides in the Atlantic ocean (all scenes of the crash are comprised of stock footage) leaving only a handful of survivors including a crew member (Richard Crenna), his wife and two young children, the ship’s lounge singer (Saul Rubinek) and the cranky captain (George Kennedy—because by law he had to be in every film involving some sort of accident or disaster that was made between the years 1970 and 1983). Luckily for the survivors, they find an abandoned ship in the middle of the ocean. Unluckily, it’s an old Nazi naval vessel that was used for torturing purposes that is haunted and begins possessing the soul of the captain. One by one the survivors start being picked off by strange circumstances, beginning with the lounge singer who is plunged into the ocean and drowned by various ropes and pulleys immediately. A death that is pretty much greeted by a collective shrug by the others; that’s what you get for not playing “Love Will Keep us Together”, buddy!

Death Ship is a film with large ambition, but limited resources. It appears as if the producers were able to procure the locations (meaning the ships) and some names for the cast, but their reach more often than not far exceeds their grasp. As I mentioned, the crucial collision scene is confusing and relies solely on previously existing footage from other films, giving us no real sense of what the survivors experienced, a real detriment considering the compounding horror that will follow. Director Rakoff relies way too heavily on shots of the mechanisms of the ship scored to creepy music for suspense, but the film does actually pick up a bit and become a lot more effective when the impact of the haunted ship begin occurring. A creepy atmosphere is finally attained and the film makes good use of the dark hallways of the haunted ship and there’s a few really disturbing effects including a film projector showing Nazi propaganda footage that won’t cease even after the project is destroyed, some good make-up work that shows the dangers of eating thirty-five plus year old mints (thirty-five year old Nazi mints, mind you) will have on your face, a bloody shower, and the most shocking scene, a room full of hung corpses. Kennedy nicely hams it up as the captain who becomes obsessed with and possessed by the spirit of a Nazi commander.

The concept of a haunted ship is a powerful one. Not only do you have the aspect of the spirit infestation but you have the isolation of no escape except the uncertain watery depths of the ocean. While never directly named a remake, the 2002 film Ghost Ship seems to work with the same general idea (I’ve never seen it, if you have, I’d be interested in your opinion) and even stole (or homaged) the poster art. Death Ship is hampered too much by its limitations, but only because it tries to be something grander than it is. If it had just opened with the survivors on the lifeboat, the film would not be bogged down by a dull first act.

Death Ship, a UK production shot in Canada, was released on VHS via Embassy in the 1980’s, but has been out of print in America ever since. It does have a Spanish DVD release and I found a copy via Cinema de Bizarre, which seem to be a transfer from a Japanese source. The print is a bit faded, but is oddly enough, presented in anamorphic widescreen.
Posted by Colonel Mortimer at 8:00 PM

Oh, I remember this one! Didn't see it in the theater, but instead on VHS rental. And yes, you nailed its essence. Thanks, Colonel.