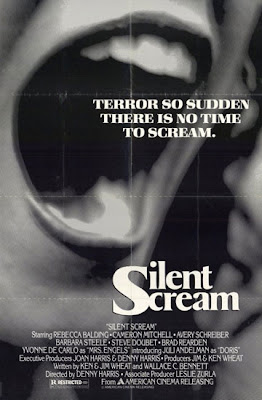 Most of the American slasher films released during the prevalent 1980s used John Carpenter's 1978 Halloween as a template for their structure. The independently produced and distributed Silent Scream (with or minus a "The" depending on advertisements), however, owes more a debt to the Italian giallo genre, with a dash of Hitchcock's Psycho for flavoring. This is due to the fact that though released in 1980, Silent Scream originally began filming in 1977 (a year before Carpenter's film was released), only to have all but 15% of the filmed material reshot.

I would venture a guess that the majority of the footage from the initial shooting period resides in the dull opening act where we are laboriously introduced to our heroine, a co-ed (Rebecca Balding) in desperate need of housing. Theses early scenes mostly consist of non-diegetic sound which makes me wonder if besides the supposedly poor composition there were sound issues. Our heroine eventually ends up renting a room in a beach side manor, along with three other possible victims, er boarders, operated by a bike riding teenager who looks like what would result should Jason Schwartzman and Wes Anderson ever crossbreed their DNA, and his attic dwelling mother (Yvonne DeCarlo of The Munsters fame).

The film, and more importantly the effectiveness of the filmmaking, picks up in Act II which starts with a tracking shot almost Kubrickian in its scope, if not however, execution. Then the terror officially begins with the roommates being offed one by one. The most impressive murder occurs in a laundry room with a nice use of shadows and blood on a hung towel and a piece of scoring the recalls some of Bernard Hermann's Psycho cues. The final act is where the Giallo influence really surface and as such we have your standard tropes like secrets from the past revealed, flashbacks, and of course, the haunting use of a melodic children song playing on vinyl. Harris (or whomever was directing these scenes) admirably lets the film gets off-kilter in it's final set piece, and even if it lacks the skill to bring it all home, the effort was appreciated.

In addition to DeCarlo, Silent Scream features a supporting cast of genre luminaries including Barbara Steele, Cameron Mitchell and Avery Schrieber. The latter two as detectives in an unnecessary run time padding device. The film is no great shakes, but makes me nostalgic for a time when more regionally made low budget horror films would somehow find a small national release. If you're interested, you can watch it instantly on Netflix.
Posted by Colonel Mortimer at 8:00 PM