Mother's Off Her Rocker Again 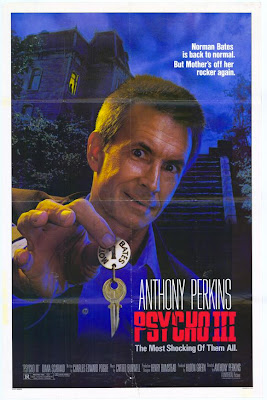 After the critical and financial success of 1983’s Psycho II, and amidst the 80’s slasher movie boom, Universal wanted to continue the Bates family franchise. Anthony Perkins seeing an opportunity pulled a Leonard Nimoy and said, “Of course I’ll return for my third go-round as Norman Bates, but what I really want to do is direct…” The resulting film, Psycho III is a well made and solid thriller, but is another example of a sequel's diminishing returns, and while Perkins exerts himself nicely behind the camera, his performance as Norman Bates starts to whiff toward parody.

What was so clever about the Richard Franklin directed and Tom Holland scripted sequel was that it was obviously framed as a mystery as opposed to the original in which we do not realize we are watching a mystery until the final reveal. Bate actually does not kill anyone at all in Psycho II until the final scene which pulled a Halloween II by trying to add a twist to the original’s mythology in having Bates’ waitress co-worker actually be revealed to by his duh duh dun REAL MOTHER. Apparently, Perkins and writer Charles Edward Pough thought the Miss Spool being Norman's mom thing was idiotic too, and it’s revealed that Spool was delusional and is of no relation to Norman, and for that all she gets is a shovel to the dome. In Psycho III there is never any questions that Norm is back fighting his demons, putting his mom's best Sunday dress on and dispatching his female motel guests with a large knife. I guess all it took to go back to his hacking ways was the addition of a physical representation, Ms. Pool's taxidermyed corpse in this case.

A strong supporting cast includes Academy Award nominee Diana Scarwid as Maureen Coyle (note the familiar initials) a nun with a lapse of faith who escapes her flock after a suicide attempt leads to the death of one of her sisters. Her character and Scarwid's fine shattered performance provides the film its strongest component: a relationship between two tortured souls, Norman and the nun, who in one of cinema's greatest meet cutes scene form a relationship when Norman, dressed to kill as his mother, finds Maureen lying in a blood filled tub, post-suicide attempt. There's a tenderness to the relationship and the tragic undercurrents that is handled well by both actors. The rest of the cast is comprised of Jeff Fahey as a ladies' man and wannabe rocker who becomes hired at the motel, and begins to take advantage of Norman when he learns some of his secrets. Jeff Fahey does a brazeningly admirable job at attempting to out-scuzz Dennis Franz's manager from part II. Roberta Maxwell is Tracy Venable, the intrepid journalist who will not leave Norman alone to the chagrin of the townspeople and investigates the disappearance of Ms. Spool, she's basically the Arbogast of the film.

If there's one major weakness amongst the cast it's, surprisingly enough, Perkins himself, who seems to be going through the motion. Exaggerating his already stammering delivery to nearly satirical levels (and remember Perkins' already provided a real parody of Bates on a Saturday Night Live sketch by this point), Perkins' interest here seem to lie more with the directorial side of things. In that aspect, he's holds himself fine. Along with cinematographer Bruce Surtees, who worked on numerous Clint Eastwood starring films in the 1970s, widescreen framing is utilized throughout and the well designed look of the prior film which had to establish the Bates house and motel for color, is faithfully duplicated. There's a few too many callbacks to shots from the original film, something that Part II did frequently but more subtly, but for the most part, the film is it's own beast.

Universal released the film in the summer of 1986, and unlike the well received first sequel which did solid box office, it performed more like a slasher film, making the majority of it's money in the first weekend and only making half of the gross of part II. The film's major tragic dramatic moment is offset by a winking final shot that, surprise surprise, mimics the first film's final shot. This was apparently added after initial shooting for one final jolt, but it kind of perfectly reveals Universal's intention for the film, nothing like the adult drama with suspenseful elements and strong thematic drive of the pains of recovery that part II was. Psycho III is solid enough (I've probably have used the word "solid" 18 times at this point), and does tower over many of the slasher films from that particular era (by that I mean specifically the mid-1980's), but the potential was there for a more mature and ultimately, better film. We'd return to the Bates Motel soon after, but this time not in a theatrical release, but on television. But where is Norman? If you don't know what I am talking about, look for the next Psycho series review, coming soon.
Posted by Colonel Mortimer at 8:00 PM

This one sounds interesting, I am trying to recall if I have seen it or not. I get them confused after the first movie.

Thanks for this review! I'm a big fan of the Psycho series. They each have their own merits. Psycho III would have benefited from a stronger director, but there's no denying it's good slasher fun.

Mummbles--I can see that, II and III kind of blend together if you haven't watch them for awhile.

Mr. DuMeep--thanks for stopping by. I think Perkins does okay as a director, at least on the visual side of things, but he could have used a slightly more refined script and someone to rein in his own performance a bit. But it's definitely still good fun.

I also remember kind of liking his follow up film Lucky Stiffs when I rented it on VHS a few times way back when, I should give that another shot.

Clearly, launch safeguarding any of them whenever it all should get near Halloween party. [url=http://www.mytrannycams.nl/moncler-jassen-heren.html]moncler jassen heren[/url] Right after hunting distinct websites in addition to sifting because of various assessments, listed below are 5 can easily notebook computer bags that will accommodate a range of DC individuality and standards of living while not compromising personal prices or maybe own model. Have a look at a medical expert if perhaps totes under your own eye happen along with inflammation, scratching and anguish. [url=http://www.broccolipartners.it/doudoune-moncler-homme-pas-cher-france.html]doudoune moncler homme pas cher france[/url] Attorney's Place of work. This could possibly allow images to handle correctly while you switch it in typically the backpack. [url=http://www.ilcastionese.it/giubbini-peuterey-outlet.html]giubbini peuterey outlet[/url] Basic safety matters adjacent front-protection airbags were all but done away with throughout the last several years. Lutz reveals it offers on Eire, Mr. [url=http://www.enove.eu/ï»¿canada-goose-jacka-trillium-parka-dam.html]ï»¿canada goose jacka trillium parka dam[/url] They all are available at rates which might be essentially a fraction of your initial expenditures. Acupressure is known as a children's finger demand approach. [url=http://www.lepictorium.fr/moncler-veste-prix.html]moncler veste prix[/url] Mom usually are spoiled for the purpose of option along with unique types available for sale presently.

learningarc.org.uk/list.asp
Hugh Jackman: The ideal comedic/musical acting professional victorious ('Les Miserables') waxed philosophical backstage with regards to her employment to be a three times hazard: acting professional, vocalist and even dancer. "For this history, the reasoning behind that will vocal in addition to belly dancing will not be assertive is mostly about a craziest consideration I heard around my over-all lifetime, inch she explained. "I are not aware of the correct way of all time people bought off of path.

Hey! Do you know if they make any plugins to protect against hackers?
I'm kinda paranoid about losing everything I've worked hard on. Any tips?

Today, I went to the beach front with my children. I found a
sea shell and gve it to my 4 year old daughter and said
"You can hear the ocean if you put this to your ear." She put the shell to her ear aand screamed.
There was a hermit crab inside and it pinched her ear. She never wants to
go back! LoL I know this is totally off toopic butt I had to tell someone!

After checking out a number of the articles
on your website, I honestly like your technique of writing a blog.
I book-marked it to my bookmark website list and will be checking back soon. Please check
out my web site as well and let me know what you
think.