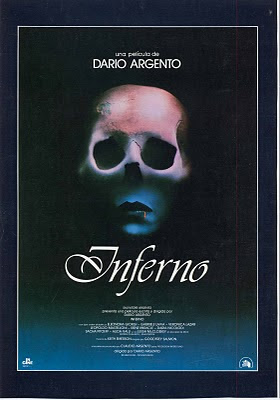 Dario Argento's 1977 Suspiria is the horror film as pure cinema. Every facet of the filmmaking is top notch and imbues an actual living entity. The colors pop, the camera moves with wild abandon (it can hardly even sit still for exposition scenes), the framing is unique, the sets and locations are askew and angular, the gore is vicious, the music is intense and enthralling. Not a single stylistic spec is spared. It all adds up to a singular horror experience where we feel immersed in the film itself, and thirty plus years later, it still is capable of providing scares (as I can personally attest having recently caught a screening at the New Beverly). If you stop and think about every nook and cranny of the script or plot, would it all make sense? Perhaps not. Does it matter? Not one fucking bit.

For his next film, Argneto decided to follow-up Suspiria with the second of his Three Mothers trilogy (the third film, The Mother of Tears, would not be produced until 2007--and is still unseen by me), Inferno. Be it a sense of familiarity breeding a less interested response, lightning not striking twice, slight changes to specific stylistic elements or just a slight step down in quality, Inferno is nowhere near the masterpiece that Suspiria is.

Inferno is still visually sumptuous, but not in the balls out total sensory assault Suspiria way. And where I can't help but succumb to Suspiria's wily ways, my reaction to Inferno's stylistic palate was of respect but not really passion. I am not sure if it's the change of milieu from the Ballet Academy to the modern (yet art directed to the fullest tilt) apartment complexes of "New York" (a set) and Rome or the slight change from the perspective of someone unknowingly embroiled in the situation to characters actively researching the witchcraft, but it fails to captivate. Like most sequels, there's more explanation and exposition involved, and as is frequently the case, especially in horror where the unknown or mysterious should be paramount, the more that's explained, the less interesting it all becomes and the more the seams begin to show.

Non-admirers of Suspiria frequently refer to it's as being composed merely of stylistic collections of set pieces, I vehemently disagree with that notion, but would apply that complaint to Inferno. Logic and adherence to Robert McKee's screenwriting practices have never been Argento's m.o. Inferno is another macabre fairy tale where perceptions of reality are tenuous. A small puddle of water may contain over a hundred feet depths with a key to unlock mysteries, buildings are living and breathing entities and the library contains a possible passageway to hell. Yet, knowing Argento’s intentions and method doesn’t prevent me from realizing that there’s not a strong throughline.

A major infulence on his style, Argento called in Mario Bava for some optical effects, the films color palate with a heavy emphasis on blues, reds and yellowy flames has an animated feel. This team-up of Italian horror maestros probably led to Argento and Mario’s son, Lamberto, forming a bond that would result in the Demons series. Replacing Goblin for the score is prog rocker Keith Emerson of Emerson, Lake and Palmer. The resulting score is nowhere near as memorable and haunting as any of the collaborations between Argento and Goblin in the 70s or 80s (an Italian director/musician collaboration that is only third to Leone/Morricone and Fellini/Rota in terms of yielding a perfect sound and vision landscape), a more subtler touch replaces the childlike caterwauling of Goblin. After the American success of Suspiria, Inferno was actually financed by 20th Century Fox, but they gave it a miniscule release.

Perhaps this review is prejudiced by watching it so closely to my last viewing of Suspiria (and admittedly I spent way too much time on comparisions between the film), this was actually my second viewing, and I liked it a bit more the second go-round. I also feel I owe it myself to give it one more try seeing how the DVD I received from Netflix was non-amorpahic. Glenn Kinney, who also expressed mild dissapointment from his initial viewing, raved about how the Region 2 Blu-Ray is a revelation and improved his opinion. The film is also revered by one of my favorite writers, Video Watchdog’s Tim Lucas. So maybe next time.