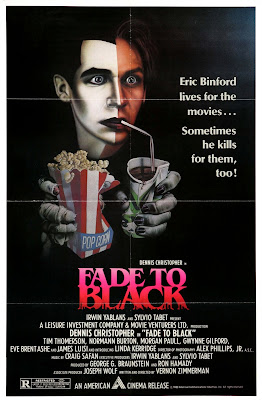 Eric Binford (Dennis Christopher) lives vicariously through motion pictures. Sustaining himself on a steady diet of doughnuts, soda pop and cigarettes, he falls asleep watching a movie and puts one on upon waking up in the morning. Every inch of wall space of the room in the house he shares with his wheelchair bound aunt is covered in cinematic posters, stills or promo materials. He works as a delivery boy for a film distribution company where his desk has a handmade sign designating the area as “Binford’s Studio”. His interaction with others, which is kept to a bare minimum, consists of about seventy percent dialogue from his favorite films (generally of a classic Hollywood, pre 1960’s, era) to the befuddlement of most. If this were the 2000s instead of the 1980s, he’d probably have a blog named after a character from a Spaghetti Western. Hey, wait a minute…

His already slim grasp on reality is shook irrevocably when he meets a bleached blonde Marilyn Monroe look alike (Linda Kerridge), who he believes to be the actual real life tragic actress, that agrees to go out on a date with him. After she accidentally stands him up (damn you Peter Horton!!!), he falls into a downward spiral that finds him costuming up as his favorite cinema characters and exacting fatal revenge upon those who done him wrong.

There’s an actual interesting underlying theme in Fade to Black concerning the sadness that can result from idolizing the inherent fantasy of cinema. Obviously Binford’s descent is the major focal point of this, but it’s also evident in his aunt (there’s actually a twist to their relationship, but it’s so stupid, I won’t spoil it) whose dreams of becoming a dancer ended when an accident forced her into a wheelchair, an incident that she holds a grudge against Eric (who was a mere child at the time) that irreparably ruined their relationship. The Monroe lookalike came to LA from Australia to become an actress, but has a future in which she will most certainly be employable only as an imitator of the screen idol. This theme is prevalent in the film’s first, and strongest, act, but pretty much left unexplored after. And that is Fade to Black’s major problem, a lack of identity.

Binford is often painted as a tragic figure, but there’s also a comedic touch in Dennis Christopher’s performance, perhaps this was caused by the fact it directly followed chronologically his acclaimed performance in 1979’s Breaking Away, where he also played a similarly obsessive type, the Italian lifestyle worshipping bicyclist. While a few of the murders in the film are generally purported with fatal intent, at least twice the deaths he caused are purely accidental. I wonder if the original intention was for more of a black comedic tone that director Vernon Zimmerman toyed with, but never fully emphasized because as I mentioned there are deaths that are without a doubt viciously enacted such as the shooting of a co-worker (an early Mickey Rourke performance) and the tossing of his aunt down the stairs all Richard Widmark like. Perhaps the most likely option here is me just trying to make things more interesting.

By far the film’s biggest albatross is the psychologist character (Norman Burton) who tries to bring some hippy philosophy to the police’s investigation. In my write-up on Twisted Nerve, I complained about the Dr. Simon Oakland of Psycho like character that attempts to explain the antagonist’s condition at the start of the third act and how it brings the whole film to a momentary halt. Well, imagine if that character was introduced earlier and frequently inter-cut to, as well as having an arc and love interest. Fade to Black did not need this useless character, and should have gone the Maniac route of focusing entirely on the killer. The character is not helped by either the soap opera level acting ability displayed by Burton nor the completely unexplained method of how the police concluded Binford’s responsibility.

Fade to Black starts promisingly enough and Christopher is game, even if he could have used a stronger director to guide him or a script with a greater sense of identity. There’s some nice Los Angeles location shooting and the concluding moments at the Grauman’s Chinese theatre nicely bring things to an appropriate White Heat referencing conclusion. It’s a shame that the film didn’t further explore the themes that it hints at. As a result, it’s a curio for those interested in the time period and genre, but not a film that endures.